Testing the durability of a sourdough starter 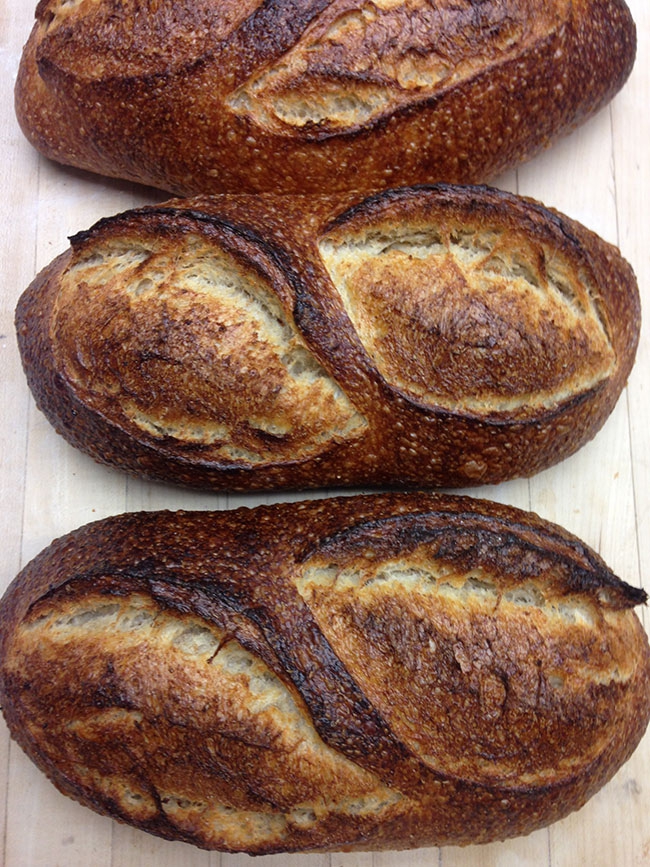 For many years now I have been teaching artisan bread classes to foodies, bread lovers and students. It is interesting that a common theme from students is they don’t like sourdough bread. After a few quick questions, however, I realize they have not had real sourdough bread that’s naturally fermented. Instead they have been eating a “bread product” made with flavour additives like acetic acid, lactic acid and fumeric acid that have been added to a premix or base to replicate the smell and taste of a naturally leavened sourdough bread.

It is unfortunate that very few bakeries culture and maintain their own levain, which in turn becomes the key ingredient in making sourdough breads. Common reasons are it takes too much work. What happens on our day off? What do I do with it when I go on holidays?

These are all legitimate questions for someone who has not been trained in making and maintaining a sourdough culture, but what I understand after spending the last decade learning about sourdough breads from industry respected bakers around the world is that sourdough is relatively easy to make, maintain and work with.

There are a few inherent issues with a sourdough, one of which includes the introduction of unwanted bacteria or a problem with mould spores. The bad bacteria issue can be avoided with proper sanitation practices. Mould spores are all around us, and if the environment where you maintain your levain has a significant mould issue then it may spoil the levain and it would have to be discarded.

Over the years, I have been my own worst enemy for my levain, forgetting to feed it, neglecting it and abusing it. Over time I came to the realization that once you have a healthy levain with the right balance of lactic and acetic acid it is extremely resilient.

From articles that I have read about a levain left unattended for a length of time, it was apparent that there are a wide range of opinions. Some people say it must be fed at least every three weeks to survive. Others say that the liquid that separates out of the levain should be poured off, others who call this liquid “hooch,” stir it back in and start feeding it again with no issues.

I decided to test the theory that my levain was very resilient. On Jan. 2, 2016, prior to my departure for the Coupe de Monde de la Boulangerie in Paris, I set aside my usual 240g of levain in a container in my fridge at home. Then at the end of May I set aside a second container in the back of my fridge. I left them both completely undisturbed until early September.

After seven months and after three months left untouched, I removed the levain from the back of my fridge. Both had an ample layer of “hooch” on top, with the container that was seven months old having a darker colour.

After allowing the cultures to warm up, I simply stirred the liquid in and took out 40g to use with a feeding schedule of 100g flour and 100g water and 40g levain. Whenever the levain is thinner than normal there are two key steps to correct the levain. Hold back some water and add a dash of salt. For the first feeding I held back 10g of water and added a dash of salt. Due to the length of time in the fridge, I allowed the first feeding to go 24 hours. After 24 hours the levain that had rested for 7 months unattended was lower than the 3 month undisturbed levain.

On the second day I held back 5g of water and added a dash of salt to each to bring the correct consistency back to the levain.

After 12 hours on day two the levains were nearly at the same level of activity.

After the fourth feeding I made sourdough bread and there was no discernible difference between the two finished loaves.

The results of this experiment resulted in the conclusion I had anticipated: My levain seems to be pretty resilient. Once you have the correct blend of bacteria and yeast, they are very resilient to a being stored for extended periods of time with no loss in fermentation power once a regular feeding schedule has resumed.

In the next issue I’ll share what I’ve learned about the microbiology of sourdough and provide steps to get your own levain started.

Alan Dumonceaux is chair of the baking program at NAIT School of Hospitality and Culinary Arts in Edmonton. You can reach him by email at adumonce@nait.ca.