October 22, 2008 – One of our experts shares a favourite holiday sourdough recipe sure to entice customers with a sweet tooth. This formula is a spin-off of the Italian classic chocolate bread. Added to this formula are rum-soaked cherries, bittersweet chocolate and sourdough culture. 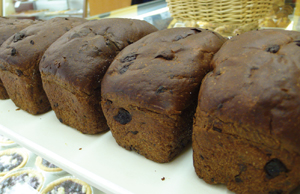 This formula is a spin-off of the Italian classic chocolate bread. Added to this formula are rum-soaked cherries, bittersweet chocolate and sourdough culture. The key to this bread is a quality bittersweet chocolate, as the flavour is not intended to be too sweet. A cup of coffee, a glass of wine and a nice mascarpone cheese are wonderful accompaniments to this bread. I have also enjoyed this bread for dessert with a lovely port. If you want to have a special treat, try chocolate bread as French toast – you’ll find it simply delicious and decadent.

I have been making this bread in my bakery, Christie’s Mayfair Bakery in Saskatoon, Sask., for about 10 years around holidays such as Thanksgiving, Christmas and Easter. It makes a nice addition to the holiday line and customers enjoy having something different and special to enjoy with loved ones at family gatherings.

The term viennoiserie is used to describe yeast-raised products enriched with butter and eggs and sweetened with sugar, although not always all three. There are certain considerations in regards to mixing viennoiserie. Specifically, this chocolate cherry sourdough bread contains 24 per cent sugar. The yeast percentage has been increased to compensate for the effect the sugar has on fermentation. Osmotolerant yeast has been designed specifically for use in viennoiserie, providing a better fermentation activity and fuller volume in the finished product, and is a good choice for this formula.

Sugar is hygroscopic and competes with the flour protein for hydration; this can delay the formation of gluten during mixing and increase the mixing time. It is a good idea to add the sugar in two stages to allow the gluten to develop and shorten the mixing time. Also, with the high percentage of butter, 10 to 12 per cent or more, it is better to develop the gluten first and then incorporate the butter in the end. Doughs high in fat and sugar need a lot of strength to support these ingredients, so it is important to have an intensive mix and develop a strong gluten structure. Baking temperature should be lower than other breads as the ingredients will cause excessive caramelization on the crust.

The high percentages of sugar and butter will produce a soft crust and tight crumb, in addition to decreasing the staling time. The sugar is a nice balance to the bittersweet chocolate and cocoa powder. The rum-soaked raisins are deliciously soft and moist and contrast with the chunky chocolate. With a glass of wine or for breakfast with coffee, your customers will love the special treat of this chocolate cherry sourdough bread.

Preparations
Chop chocolate into small chunks. Chop cherries into small pieces and macerate with rum and water for at least one hour.

Levain formula is 100 per cent flour, 100 per cent water and 10 per cent starter.
Mix levain by hand or in a mixer according to amount with final dough temperature of 74 F and ferment for 12-15 hours at 75 F.

Place in a holding tub and ferment one hour at room temperature. After one hour, fold dough and refrigerate for an additional hour. Refrigerating the dough makes it much easier to handle and shape.

Divide mini loaves at 250 grams each and preshape into rounds.

Divide small boules at 70 grams and preshape into rounds. Rest for 20 minutes.

Shape small balls and place onto a sheet pan with parchment.

Let loaves cool in pans before removing.
Print this page