Features Profiles
Sights on the podium

Team Canada organized, practiced and baked their way to the Lesaffre Cup. Next stop: Paris. 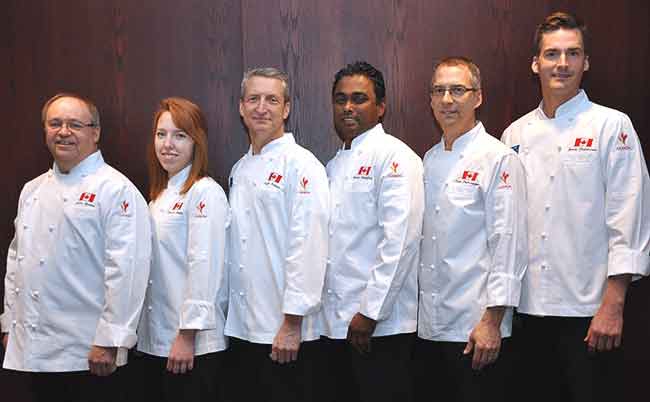 After years of coming close, the Canadian baking team has finally snagged the Louis Lesaffre Cup. The team is having its best year yet, and members want to maintain that momentum until they are named the world’s best.

The Louis Lesaffre win happened in June in Buenos Aires, Argentina, at the Americas qualifying round – one of four taking place around the world. Winners qualify to compete in the prestigious Bakery World Cup (Coupe du Monde de la Boulangerie) happening at Europain in Paris from Feb. 5-9, 2016. Our hardworking Canadian bakers will face 11 other teams for a spot on the podium.

To prepare for the Lesaffre Cup, team members worked on a wide range of products, developed new formulas, honed innovative techniques, made and remade products, always with an eye toward improving the quality, says team member and manager Alan Dumonceaux, chair of the baking program at the Northern Alberta Institute of Technology (NAIT).

The team’s efforts were judged against those of more than 20 other teams in three categories: baguettes and world breads, Viennese pastries and artistic showpiece.

“A large variety and quantity of products have to be produced,” Dumonceaux says.

The team consists of four members this year: Marcus Mariathas, director of product development for ACE Bakery, who competed in baguettes and world breads; James Holehouse, graduate of the NAIT’s baking apprentice program, who contributed the artistic showpiece; Dumonceaux, who created Viennese pastries; and Elien de Herdt, a graduate of NAIT’s baking program, who brought her skills to the inaugural “Young Bakery Hopeful” category.

Success in the competition resulted from a combination of preparation, flexibility and a little luck. The first night involved two hours of preparation; the second day, eight hours. Mariathas, Holehouse and Dumonceaux worked together in one kitchen because team members were encouraged to help one another.

“The judges like to see members communicating,” Dumonceaux says.

For the baguettes and breads division, Mariathus made 10 different types of bread, Dumonceaux says. The day before the competition, he drew from three types to find out which one he would be required to bake. So he had to practice 12 breads and in the end bake 10.

James Holehouse’s job was to create a showpiece that was “symbolic of an event that has marked your country’s history.” Holehouse depicted Samuel de Champlain’s discovery of New France, a sculpture that received kudos for being far more detailed than those of his competitors. “It contained more thinned pieces, it was more colourful and creative and of higher quality overall,” Dumonceaux says.

Dumonceaux made 14 products in all, among them panettone, an Italian sweetbread; cramique, a Belgian breakfast loaf; and melon-pan, which he describes as a sweet bun with brioche dough surrounded by cookie dough.

Criteria include weight, correct number of pieces, development quality and aesthetic appeal. Entries that focus on taste and creativity earn the most points, Dumonceaux says. Competitors are penalized if they go over the strict allotted time limit. Cleanliness and proper attire play their part as well.

Low-protein flour among challenges
Because it was winter in Buenos Aires, humidity was not a problem, Dumonceaux says.

However, flour was a big issue. “They gave us the technical analysis on it a month before and the flour we had to use was very weak and very low in protein. Whenever you have low-protein flour, you have to either add more flour or take water out to compensate, because it doesn’t have the same water absorption power.”

For his entries, Dumonceaux chose to add more flour because reducing the water would have thrown off the yield.

“I added more flour to get to the right dough consistency and then my doughs took double the mixing time that they normally would have in order to get some gluten development. I also gave additional folds to my laminated doughs just to make sure I had enough strength.”

Another big issue they came up against was the absence of bread racks. While practicing they had had 10 racks to use. With only two racks available, they had to improvise by putting product wherever they could: thus, bins were piled up and trays went on top of trays.

Other obstacles included $900 extra in luggage fees to accommodate “a massive pile of ingredients and gear” and the fact that preceding teams were running late, which put those that followed under added pressure.

Despite these challenges, the team prevailed to earn their tickets to the Bakery World Cup.

Judges were impressed with Team Canada’s organizational skills, Dumonceaux says, commenting that they could tell Young Bakery Hopeful de Herdt was from Canada by her methodical approach.

Canada’s win in the event’s inaugural ‘Young Bakery Hopeful’ division made the team’s victory even sweeter.

Dumonceaux found de Herdt through Skills Alberta. The young baker was preparing to do Skills Canada already, so she happily joined the team and the three senior members took on the task of training her.

Young hopefuls had four hours to create a children’s tea for six- to 10-year-olds gathered to celebrate a birthday. de Herdt put together a spread consisting of four items: sourdough cake pops dipped in chocolate (Mickey and Minnie Mouse); croissant cupcakes made with laminated dough, filled with chocolate frangipane and designed to resemble a cupcake; smiley-faced pizzas; and Nutella-style sandwiches featuring laminated dough and hazelnut filling.

Everything had to have yeast in it, she says.

“I made a sourdough Belgian waffle in a cake-pop shape and decorated it as Mickey and Minnie Mouse.”

For the miniature sandwiches, instead of folding in butter to make the pastry layers, she used a mixture of hazelnut filling and batter.

“The fat from the filling made nice layers.”

“It’s fun to come up with different products you wouldn’t see normally. I love being creative,” she says.

Once finished, first stop was the judges’ table, where competitors presented to one judge, who gave them feedback on their creations. “They didn’t really have negative criticisms,” she says. “They really liked the waffle pops; the sourdough in a waffle pop.”

At the convention centre, de Herdt and other competitors cut up and presented the treats to small tables of children on a stage.

“If the kids didn’t like it, everyone could see,” she says with a laugh.

She needn’t have worried, as young partygoers held up plenty of smiley-face signs. Best of all, judges named her the winner.

de Herdt, who graduated from the full-time baking program at Northern Alberta Institute of Technology in 2014, works the night shift at Dutch Delicious bakery in Edmonton.

One thing she learned in Buenos Aires was to be prepared to adjust her recipes to demands of different temperatures.

“There were nine people in that kitchen, all with different oven temperatures,” she says.

“It really opens connections, you learn lots that you can take into the workplace too, like cleaning up after yourself and giving yourself a time schedule.”

Preparation is key
They put in “hundreds and hundreds of hours” of practice leading up to Argentina, Dumonceaux says. They held five team practices and did three full practice runs each, along with countless hours of fine-tuning. Products have to be an exact weight, and have to take into account prebaked weight, baking loss, temperatures and variables.

Competing involves countless hours of preparation. With several team members hailing from NAIT, most practices were held at the college. Four members came from the Edmonton area and two members flew in from Toronto and Montreal. They held the final practice at Southern Alberta Institute of Technology (SAIT).

The team wanted to make sure they practiced outside their comfort zone, he says. For this same reason, they have requested permission to get together at George Brown College in Toronto to prepare for Paris. The team meets once a month through the fall but will meet every two weeks starting in November.

Paris bound
Dumonceaux says one huge challenge in preparing for the Bakery World Cup is the lack of preparation time. Because the criteria – the scope – won’t be provided until November, after the Asia qualifying rounds are complete, the team must prepare based on their best predictions of what will be required. To give you an idea of what they are up against, last year they had nine months to prepare; this year, they have just over two months.

There is a lot at stake, as those who mount the podium in Paris get a free pass to the next Bakery World Cup. After the Louis Lesaffre Cup, the top three or four bakers in each category will be invited back at Europain for the World Masters in 2018, an individual event where 24 bakers compete.

He says financial support from the baking community, allied trades and associations, have been instrumental in the team’s success. Also key is attracting new members: because members are limited to competing twice, de Herdt is the only member who can return next year.

The budget for Paris is approximately $100,000, which includes flights and accommodations for the organizing committee. To follow the team’s journey, visit https://www.facebook.com/CoupeLouisLesaffre/.

Those wishing to become a member or support Team Canada as it vies for the podium in Paris, can contact Dumonceaux at adumonce@nait.ca or 780-471-8693.