How the Bouman family found their sweet spot 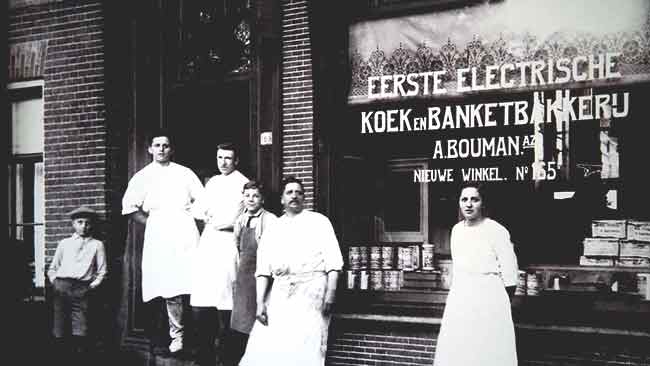 Roy Bouman was just “putting the wheels” on his new bread slicer when he answered my telephone call on a sunny day at home in Vernon, B.C. His tone was buoyant, and why wouldn’t it be? Twenty years ago, with three young sons depending on him, Bouman and his wife Caroline took a leap of faith to open a bakery, and now they have a hoppin’ livelihood to show for it. Before I digress into the generations of Bouman bakers that preceded this particular one’s life at the helm of Sweet Caroline’s, let’s give due pause to say: Happy 20th Birthday! Twenty years in the competitive baking industry is an accomplishment indeed.

Getting His Start
Growing up in British Columbia, Bouman did not know the historical length of his baking ancestry in the Netherlands when he got his first job at a bakery as a newly graduated 18 year old in 1978. His first recollection of being initiated into the industry was that of the pre-dawn light.

“My earliest memory was probably being told ‘Okay, you can start tomorrow and we’ll see you at 3:00 a.m.’ and I was like – what, what time? And they said 3:00 a.m. and I was just out of school then and remember thinking nobody gets up before eight o’clock; what are you thinking, 3:00 am.? So here I was at 2:30 in the morning walking to work and thinking oh my goodness, what have I gotten into?”

It wasn’t so much a purposeful foray into baking, as a pre-determined one. The family was part of a close Dutch community and his parents arranged the position with the owner of the bakery. Bouman thought he was going to work in a car wash. What a different future that would have been.

Perhaps there was a glint of the future baker in his childhood, although as a boy he was all about playing with ratios.

“I didn’t get an allowance growing up, so I would say, ‘Can I make something?’ and then I would eat half the batter and my Mom would wonder, ‘Well how come this didn’t rise that much?’ And I’d be there licking my lips.”

Bouman’s products definitely rise properly today, as they surely did for the lineage before him, although he didn’t learn the extent of his family’s roots in baking until he opened his own shop.

The Bouman family has been in the industry since his paternal ancestors opened a bakery in 1888 in Zaandam, Netherlands. The bakery was eventually moved to a newly built location across the street, where the family switched from coal to electricity as a means to power the oven. This became the first electric bakery in Zaandam. And it was here in a room behind the oven, during the second world war, that Bouman’s grandfather and his father’s uncles hid fleeing Jews and helped them safely reach the Dutch underground.

“It was quite something. If they ever got caught, that would have been it. I always tell my boys, ‘Boumans, we don’t sit back if people need help.’ Must get that from my grandfather and my dad.”

A leap of faith
Bouman and his family relocated from Vancouver to Vernon in 1991 when he was offered a job as a cake decorator at Safeway. He was laid off three months later. He dealt with sporadic employment for four and half years, delivering flyers, mowing lawns and generally taking any work possible to stay in Vernon.He didn’t want to uproot his family; quite the opposite. He moved around a lot when he was a kid and really wanted to keep his family in one place no matter what. So when Caroline saw an ad in the paper from Community Futures looking for people interested in being entrepreneurs, it turned out to be the opportunity to settle he had been looking for.

“We had always wanted to start our own bakery, and they really helped us out.”

The program spent three months helping the Boumans get their accounting set-up and empowering their business know-how. Caroline took on the books and staffing, a role that allowed her to be at home with their sons. Bouman took on the task of chief baker.

“It’s been a good balance for both us,” he says.

In 1996, Bouman and his wife officially signed the lease to their new life and opened Sweet Caroline’s Bakery, their from-scratch Dutch-heritage shop.

“How it started off [opening day], I was making lots of bread thinking ‘Oh so many people are going to come in’; I had signs out saying we were coming. I baked like we were in business for 15 years that day, and mostly bread. When we actually opened I think we had 48 customers and probably 45 of them were friends, so I learned I have to adjust pretty quickly and that’s been the game the whole time, the whole 20 years: finding out what everybody likes and sticking with what they want rather than what I think should be out there.”

Fast forward to 2015, and Bouman says Sweet Caroline’s averages around 200 transactions on weekdays, about 300 on weekends, and at Christmastime over 400. The bakery is open from 6:30 a.m. to 5:30 p.m., and is closed on Sundays and Mondays.

While the first five years demanded the Boumans put in sheer hard work, the second five years marked the seeds of expansion. They needed more equipment, showcases and product. The bakery started off with some tables and chairs for people to eat, but as they grew, those tables ended up outside or gone altogether to make space for product. Bouman started to know what his clients liked, and felt freer to take creative chances. As a baker, he describes himself as “pretty good at everything but I’m not a master of anything.”

Making the 10 Year Mark
At the 10 year mark, Bouman said they just kept their nose to the grindstone and kept trying things out. Even after 10 years, he didn’t feel the bakery had the stable customer count that a well-established place would. The locale had the added challenge of being very tourist-centric, meaning a lot of clientele that came and left along with the end of their vacation. It took another five years for the Boumans to see the maturing fruit of their labour.

“We found that at about the 15th year or so, things started to level off and we could really anticipate what we had to make. At Christmas there’s not as much profits because you are spending so much on rich ingredients, so the nice thing about being open for about the 15 year mark is that you can really start to see the pattern so you kind of know from the year before how much you should make, and even though you have new people coming and going, it still seems to work knowing how much to make so we don’t have ingredients left over.”

I ask Bouman if he had a goal for the number of customers he wanted to have.

“No, we just wanted to get out the hole,” he says with a chuckle. “We wanted to get to the point where we made a profit. It was just [to] see where it went: we put everything on the line, so there was no looking back. We’re taking a step of faith here, we’re going to work as hard as we can, and be as honest and fair as we can, and my goal was to provide for my family basically.”

Roy Bouman’s grandfather, standing centre with the mustache, in front of his electric bakery.

The ingredients of success
“I’ll take care of you, but you’ve got to take care of me.” I heard Bouman mention this twice in relation to staff at his bakery, and I figured out why. It underpins his whole approach to caring for the nine employees he has.

Peter Siemens was the person who oversaw his three year apprenticeship, and altered how he thought a boss should lead because he was so kind. Bouman learned how important it was to treat staff well, respect the people you are working with.

“It goes a lot farther when people feel respected and heard and when you take care of them, they will take care of you.”

He credits “the amazing people that I have on staff” with helping the bakery arrive and thrive at the 20 year mark. His primary staff have been with him for over a decade. They know what they are doing and bake a consistent product.

Bouman mainly uses a single base that all products branch from. He says this allows him to be creative and offer customers new things. Bouman takes great pride in his bakery’s products, and wants to ensure his customers can be proud of serving them too.

“The prices go up and people understand that, but I’ve never changed the quality of the product and people still appreciate that.”

Along with consistency, customer service is a cornerstone of his bake-shop philosophy. He strove to ensure that up front was always well staffed so customers weren’t penalized for a backlog in the kitchen. He says he enjoys that the bakery has allowed him to shake hands with a lot of great people he wouldn’t have otherwise met. He likes to be involved in the community through things like his church and the At the Arbour program, which gives out free food, clothes and haircuts. He speaks with empathy of the hardships faced by the poor, the kind of empathy that comes with knowing what it’s like to struggle. Establishing his bakery was a monumental task that even caused him to black out once from stress while talking to his mother on the phone. But 20 years later, he has three grown sons making successful lives of their own, and a family and bakery with roots deep in the community, just as he wanted.

As my conversation with Bouman comes to a close, he mentions he is about to leave for a vacation to Hawaii. This makes me smile, as knowing how hard bakers work I am sure it is a much deserved holiday. Bouman says he has no worries leaving his bakery in his employees’ hands, and they have never given him a reason to.

“My business plan from the beginning was to work my way out of a job. I’ve seen too many bosses become alcoholics, not delegate, never let go of things; just work themselves to the bone. I want to delegate and let other people do, so I pass on. I don’t hold back; I share what I know.”