Crazy about the science of chocolate, pastry chef duo Dominique and Cindy Duby have developed a worldwide reputation for creating sweets with wild flavours and unorthodox ingredients. 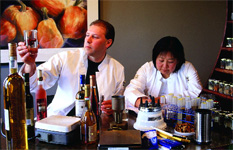 Dominique and Cindy Duby’s path to international gourmet chocolate fame is an example of the variety of possibilities open to pastry chefs. Their consulting business, BC DUBY Hospitality Services Inc., and their online chocolate boutique, DC DUBY Wild Sweets, are in turn a good example of a concept that focuses on a narrow niche market and strives to satisfy its needs in as many ways as possible. Their target group, the high-end gourmet chocolate clientele, is not an easy one to satisfy, but it is becoming more and more rewarding for the Dubys.

Through their website, www.dc duby.com, they sell limited-edition DC DUBY Wild Sweets chocolate collections and related products. The Dubys are also known for their artistic flair and creative ideas, and they provide consulting, food styling and creative services to many corporate clients including Singapore Airlines and Grand Hyatt Hong Kong.

The Dubys call their approach “molecular gastronomy,” in which they apply scientific principles and techniques to small-scale artisan food production. They do not just talk about chocolate as a sweet, they combine unusual ingredients and test new methods to come up untraditional flavour pairings that are the trademark of their “wild” sweets. Their fall 2005 collection was called Harvest and it was based on “fruits, nuts, vegetables and wine gathered from surrounding orchards, fields, woods and vineyards and includes smooth ganache/emulsions, luscious caramels, soft fragrant gelées and/or texturally contrasting nut pralinés.”

In the gourmet world, it is crucial to be known by the right people and the right media. The Dubys’ meticulous nurturing of media relationships is starting to show great results. Magazines from EnRoute to Eating Los Angeles call them “mad chocolatiers,” and describe them as “renowned Canadian pastry chefs who are among the growing school of scientific foodies.”

In 2005, they participated in the Annual Masters of Food & Wine event in California. They were the first Canadian pastry chefs ever in the event’s 20-year history to be invited to participate. From its inception in 1987, the Masters of Food and Wine has hosted some of the world’s most talented chefs. In 2004 and 2005, the Dubys were master chefs at the Epcot International Food & Wine Festival, at Walt Disney World, Orlando, Florida. And in 2004, they gave a Wild Sweets presentation at the World Pastry Forum in Las Vegas.

Road to success
The Dubys’ combined road from Belgium and Richmond to Burnaby, B.C., and to international success has included hard work and some sidetracks, although they never strayed very far from their childhood aspirations. As a boy, Dominique was fascinated by chemistry. He says his early experiments with seasonings were not all that successful; he once secretly added salt to his mother’s cookie dough, much to her chagrin. Dominique later realised that if he studied chemistry, his big dream of travelling the world would have to wait for four years and he did not have the patience for that. So he enrolled in a two-year pastry program at the ICET Hospitality School in Belgium to learn a profession that he could carry with him anywhere.

Meanwhile, Cindy was one of very few students in home economics at her high school in Burnaby, B.C. She says that her teacher was very good and, because the class was small, the teacher even arranged a practicum for all students. Cindy worked at a local bakeshop and got hooked. She followed that with bakery and pastry arts training at Pacific Vocational Institute, a predecessor of Kwantlen College in the Vancouver area.

Through travel and mutual interests the two met and married, and later operated several food-related businesses together.

These included a manufacturing business the Dubys owned and ran for nearly a decade. The plant provided desserts for hotels and restaurants, but after a while the two decided they’d had enough.

“We realized that this was not for us,” says Dominique. “The business was getting too price competitive. It was all just price and pushing more product out.”

Inspiring others comes naturally to people who are fascinated with the science of food and armed with strong artistic and culinary skills, but when Cindy and Dominique got out of the manufacturing business, they decided to go back to school and study adult education to better understand the psychology of adult learning.

Eventually they chose chocolate as their main “medium,” partly because of a consulting contract in Asia where it is customary to give gifts at the end of major business interactions.

“We wanted to give a really unique Canadian gift and made a collection of wild Canadian truffles,” says Dominique. “Everyone loved them and said we should start selling them.”

In 2003, Dominique and Cindy spent the year photographing and creating the recipes for their first book, Wild Sweets: Exotic Desserts and Wine Pairings. The book was awarded the title of “Best book in the world on matching food and wine” at the Gourmand World Cookbook Awards in Barcelona, Spain. Charlie Trotter, of the legendary Charlie Trotter’s restaurant in Chicago, agreed to write the foreword for the book.

“Wild Sweets has caused me to rethink my approach to dessert, but, more importantly, it has inspired me to re-examine all of my cuisine. Now that is a remarkable accomplishment,” wrote Trotter. “Three cheers to you, Dominique and Cindy – you have delivered us a masterpiece.”

Instead of opening a retail store to sell their chocolates, the Dubys opened an online boutique in 2004. This gave them a worldwide audience and none of the headaches of retail. Sales of their exotic chocolate collections have been brisk ever since.

“Elite gourmet clients love finding unique things,” says Cindy. “They love to be the first ones to discover something new.”