From high-tech to hand-made, iba covered everything 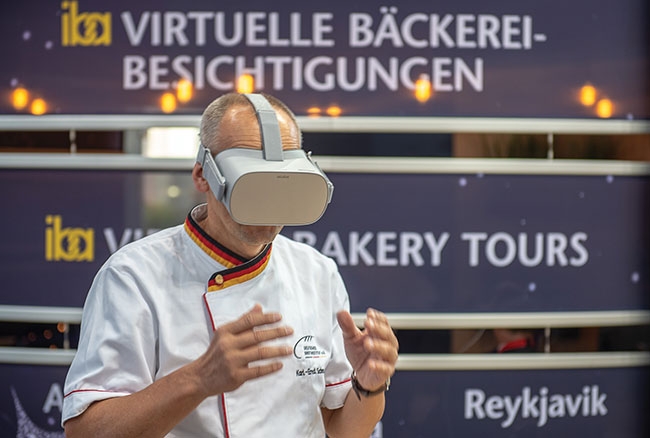 Thanks to 3D goggles, bakers could experience bakeries from around the world.

Munich, Germany – The 24th iba wrapped up as of September 20, 2018. 76,800 exposition visitors attended, and the final report estimates that 2.1 billion euros in trade contracts were signed.

A survey of 1,373 visitors and over 76,000 trade visitors were interested in digital solutions and automation, new business models and product safety as the key developments for automated bakeries. The same survey noted that 94 per cent of surveyed bakers and confectioners considered their personal trade show goal of collecting “information about new products” was reached. Canadian companies were featured and received a great deal of attention from vendors, among them, Abi Ltd, FoodTools, Lallemande, and Miwe.

Between the iba.FORUM and the newly created iba.SPEAKERS CORNER over 100 lectures were delivered. The focus on more ditigal solutions also appeared in the displays featuring 3D glasses, where participants could explore bakeries in Greece, Germany, Iceland, Austria and the United States for inspiration.

This international trade show featured bakers from Brazil, China, Germany, Iceland, Japan, Norway and Taiwan. The UICBC Junior World Championship of Confectioners competed on the 19th and the 20th of September. Haoran Lyu of China won the international competition of the best junior confectioners. Zhou Bin and Peng Fudong from China are the winners of the “iba-UIBC Cup of bakers.” The competition was fierce: International chefs from each continent conjured up pâtisserie artwork at the highest level. The UIBC Junior World Championship of Confectioners was the grand finale following the UIBC Cup of Bakers and the German Championship of Master Bakers — for 86 per cent of the trade fair audience, these live professional competitions were highlights of the trade show.

Bakers, baking equipment manufacturers, and ingredient suppliers were in abundance at the show, providing information for every level of bakery and patisserie specialists. Exhibitors from 50 countries covered the entire spectrum of baking goods, from confectioners, restaurateurs to food retailers.

Sustainable packaging and foods were one of many new topics discussed. From the change in Germany’s food regulations to allow mealworm flour, to the use of blockchain records to measure authenticity or freshness, iba had something for every niche in the industry.

Iba.TO GO! displayed snack industries’ inventiveness. Speakers discussed changes in shop design, and offered workshops and displays. Iba.Operate offered a market overview which was a first for this trade show. Digital innovation added a new level of complexity to the food industry.