The art of presentation: The cutting edge in plating trends 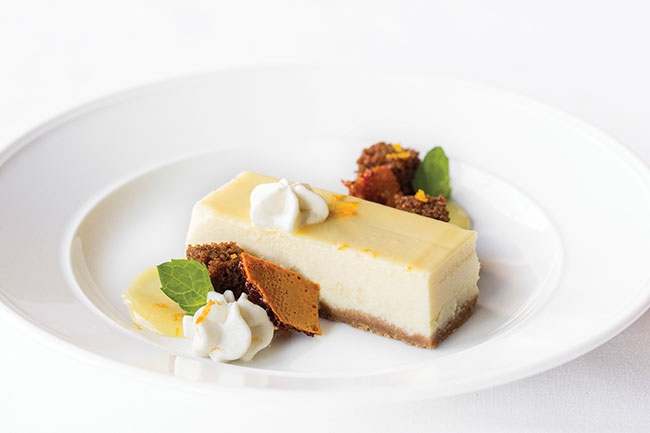 A plated dessert provides a sweet chance to relax and indulge at the end of a meal. The dessert needs to complement the menu, fit with the style and ambience of the restaurant or venue and be pleasing to the palate. Most importantly, the plated dessert is the last impression a customer leaves with, as it lingers on tastebuds.

Every neighbourhood has their favourite Italian restaurant. For residents of the Glebe area of Ottawa, that restaurant is Orto Trattoria. Chef Marie Ford, the restaurant’s pastry chef, talks about her plating style; “I would describe it as bold. I like it to be a little shocking and take people back a bit. “

Her aptly named, “The Best Part of The Tiramisu,” ignores traditional sodden lady fingers for a delicately thin crust. “There is a high tower of mascarpone mousse, crisp orange cocoa tuille, a round of shortbread and an amaretto chocolate truffle, dusted with cocoa,” says Ford. All the traditional flavours of a tiramisu  are there, but deconstructed. It’s definitely not from Nonna’s kitchen.

“The Budino is another classic, but I put it into a tart,” says Ford. “I love dark chocolate– at least 70 per cent. One my favourite combinations is chocolate with lime.” The tart arrives topped with sea salt, lime zest, coconut lace tuille, and a swirl of coconut cream, with a side of sweetened lime syrup.

And when the restaurant owner asked for cannolli to appear on the dessert menu, Ford was up to the challenge: Textures of Cannoli, an imaginative plated version. A rectangle of white chocolate orange semi-freddo, with nitro chocolate, pistachio crumble and cinnamon shell, arrives trailing swirling clouds, as customers crane their necks, interests peaked by what’s on the plate. It’s a dessert statement “That’s what’s fun about using nitro chocolate,” says Ford.

“I really like the idea of Dropped Ice Cream,” Ford says, referring to a plated dessert that appeared on the summer menu. It featured two in-house made ice creams– a scoop of June-fresh strawberry and a delicately sweet mascarpone cookie cream, with nitro-chocolate shell, sugar cone and strawberry hibiscus splatter.

Sarah Stratford is the executive pastry chef at Oliver & Bonacini, in Toronto, Ontario. She’s responsible for event venues including Arcadian, Malaparte, The Carlu, TRBOT/Lennox Hall and Village Loft describes her style quite simply. “I focus on traditional classic flavours and comfort foods. I like a bit of whimsy, with nostalgia.”

Her team consists of one pastry chef, eight pastry cooks and a bakery that produces items like brownies, cookies, squares and cakes for the plates. For many pastry chefs scrambling in solitude, this may sound like a dream, but consider the magnitude: “Each venue will host an event that may be for 20 people or up to 900 people,” Stratford says.

From corporate events, to weddings, special occasions, social events and product launches, Stratford must ensure there is something on the menu for everyone. “There will be one dessert with fruit, one with cream, one cakey item and one wild card. I like to make something completely different, like maybe a Pavlova.”

Stratford, conscious of allergies, also follows the guide of one dessert that is gluten free, one dairy free, one nut free and one vegetarian. And while desserts served at events are predetermined by the host, who is given a list of options, Stratford and her team always needs to ensure that other dietary options are available for 10 per cent of the guest count.  “Some hosts let us know the needs are their guest before the event. Others do not.”

For her holiday menu, Stratford has included a harvest spice mini trio, including an apple fritter, glazed in apple cider reduction, pumpkin cheesecake and maple sugar pie — a nod to her French Canadian roots.  Another plated dessert is a brown sugar profiterole, filled with cinnamon custard and served with apple compote and candied walnuts. And what can chocolate lovers expect? A silky white chocolate cheesecake with Clementine curd, gingerbread cake, a piece of honeycomb and orange honey whipped cream.

At Toqué! Restaurant, in Montreal, Quebec, pastry chef Daniel Mongraw and his team of three make all the desserts for both the main restaurant and Brasserie T, the more casual sister restaurant. The three desserts on the tasting menu change every two to four weeks, but he adds, “Customers don’t receive a menu, which allows me to pivot a bit if something new arrives in the kitchen.”  As for à la carte, that changes every two- three months, one dessert at a time.

When other restaurants may see the summer as a holiday mode, the pastry kitchen at  Toqué! is busy making purees like roast peach or sour cherry, canning stone fruits, and even making jams. “The strawberry sorbet on the menu in January is made with fresh strawberry pureed that summer,” says Mongraw.

In September, apples and pears dominate the desserts By October, think cranberries, lingon berries and squash. “A lot of people don’t think about squash on a dessert menu, but I use it to make things like squash and honey ice cream.” says Mongraw.

In December, customer may even see desserts made with fir needles. Past plates have included iced parfait and meringues, made by grinding fir needles into the sugar before using it in the dessert. Add an almond and olive oil cake, with olive oil jam, a lemon curd and a Quebec wild blueberry mousse, using blueberry puree made in the summer. Then, it’s topped off with Opalys white chocolate used for décor.

“I use a lot of white chocolate, but I’m not featuring it as the star of the plate. I use it as a flavour background for other things like fruit. Dark chocolate has a lot of acidity in it so I like play around with that and things liked buttermilk, raspberries and blueberries.”  As for milk chocolate he says, “It’s very sweet, so I like going salty. I like milk chocolate with miso, or black garlic. Earthy, salty flavours.”

Mongraw keeps it all in stride, “Desserts are completely unnecessary,” he muses, “The only reason people order them is for joy and pleasure.”

Words every pastry chef should live by. Plate on!