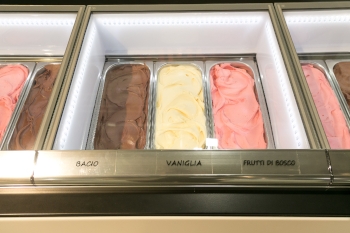 A sure sign of spring is the increase of frozen treats like gelato, being bought in cones, cups and tubs. The Italian ice cream is gaining popularity in Italy and overseas, and with a wider variety of flavours, more awareness to food allergies and intolerances, gelato’s popularity is forecasted to increase, and HostMilano 2019 is on top of the gelato trend.

According to a study by Unioncamere, spending on gelato has increased to 3 billion Euros in Italy alone, but it’s popularity is gaining ground around the world: the same study predicted a 9 Billion Euro turnover throughout Europe.

HostMilano, organized by Fieramilano from October 18 to 22, explores all facets of gelato creation, consumption and display. The trade show offers a look at state-of-the-art machinery, accessories and refrigerated counters to anyone who is involved with the world famous frozen dessert.

New twists on the old favourite such as creating variations for organic or gluten-free and vegan gelato are among some reasons the dessert is gaining ground internationally. Part of its popularity lies with its photogenic appeal: Its pretty colours and intriguing texture makes gelato a social media darling, spreading its appeal quickly across all online platforms.

Gourmet versions have attracted the attention of high-end restaurants and artisan gelato has undergone a restyling, combining tradition and innovation. With new technologies, and Instagram pushing its increasing popularity more variations are sure to be seen in the next few years. Currently we are seeing gelato used as a filling/basic ingredient (e.g. gelato Panini), along with the invention of innovative preparations, like soft gelato served and accompanied by French-fries.

HostMilano will feature various techniques for making, serving and marketing this growing trend. Billed as the leading Hotel, restaurant and catering event, HostMilano 2019 has already confirmed the registration from attendees in 50 different countries.