Features Profiles
Countdown to the Cup

Two of Canada’s finest bakers will be vying for World Master Baker titles at this year’s Europain show. 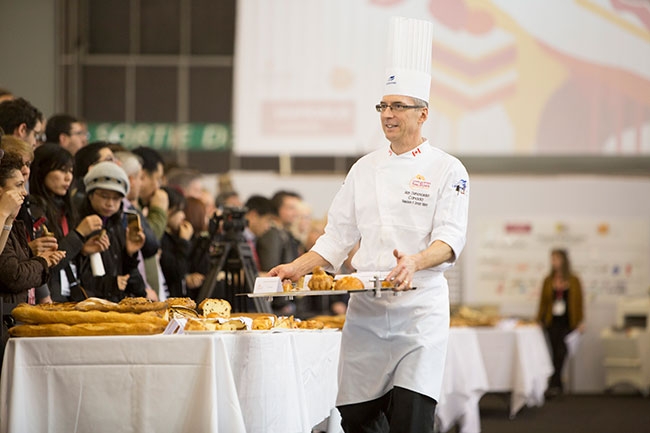 Alan Dumonceaux, chair of the baking program at Northern Alberta Institute of Technology (NAIT), and Marcus Mariathas, senior director of product development for ACE Bakery in Toronto, were selected to compete for the coveted World Master Baker titles in the categories of Gourmet Baking and Nutritional Bread respectively.

The prestigious competition, which takes place Feb. 3-6, is by invitation only. Both have competed in the Coupe du Monde de la Boulangerie previously as part of Team Canada

Dumonceaux and Mariathas learned of their selection to compete among the best in the world in April 2017, giving them just under 10 months to prepare. With Dumonceaux competing in the Gourmet Baking category and Mariathas chosen for the Nutritional Bread category, the two have been busy developing recipes, practicing and putting the finishing touches on their plans of attack. Each must create various products according to strict rules in their respective categories.

“They always have breads and pastries from around the world,” says Dumonceaux. “A few of them I’d never even heard of, so you have to watch videos, look for formulas and then start practicing. The ultimate thing is you have to put your own spin on them. You want to see how you can make it better and faster.”

Practice time leading up to competition ranges from 500 to 1,000 hours when all is said and done. Every ingredient, every ounce and every second must be accounted for. Recipe books containing final formulations and nutritional facts had to be sent to the Bakery Masters by Jan. 12, preventing any last minute changes.

“One of the challenges is that everything has to be a specific weight, baked, cooled and garnished, so there’s a lot of trial and error, and lots of ugly ducklings during practice,” Dumonceaux says.

With five judges watching their every move during the competition, Dumonceaux and Mariathas must be professional and calm, even as the clock ticks down. They will each have two hours the day before competition to prepare their ingredients. On competition day, they will have eight hours to mix, bake and garnish their various products. Every minute over the allowed time limit costs the competitors vital points. Brian Sisson, vice-president of operations for ACE Bakery, says each move must be calculated in the eight-hour affair. “When you’re mixing the doughs and letting them proof, your timing has to be exact. We want it to be relaxed when he [Mariathas] is in front of the judges. We don’t want him sweating at the brow or running from one product to the other because that will look disorganized.”

Mariathas says the process of preparation over the last year has all been leading up to the main event. His first step was to plan his strategy. Then he moved on to recipe development, followed by full run tests of each product, and finally, solidifying exact timings for each item.

“The key is to have all of them done in the late hours of the competition. You need to make sure you allocate specific times for each product. I have to do about eight varieties of dough, so each dough needs enough timespan allocated for mixing, proofing, baking and garnishing to impress the judges,” says Mariathas.

The experience that both Dumonceaux and Mariathas have garnered from past international competitions will be invaluable in Paris.

“I learned you have to be precise and clean with what you do,” Mariathas says. “It has to be creative enough, but at the same time you don’t want to be clumsy. You have to know the steps and you have to have the timing right. They give big points for taste, so even if a product looks a little bit off, if the taste is awesome that brings a lot.”

Alan Dumonceaux proudly carrying finished products at the 2016 Coupe du Monde de la Boulangerie competition at Europain. For the first time in Canada’s history, two of Canada’s own will be competing for a World Master Baker title at the 2018 Masters de la Boulangerie.

Dumonceaux has learned that you can never be too organized and you cannot practice enough.

“It’s just like the famous old saying ‘the devil is in the details.’ The fine details and the repetition of practice is what’s going to make you more successful.”

For both bakers, the “product of your country” will be perhaps the most crucial component in each of their respective categories. It’s the competitors’ chance to really showcase their creativity and talent.

“The biggest mark for the product of your country is on creativity and innovation,” says Dumonceaux. “You can’t make something that people are already doing. You have to try and innovate and make something new. These are the hardest products to come up with.”

Dumonceaux has been bouncing ideas off of his coach Clayton Folkers, a fellow instructor at NAIT, as he brings the recipe of his country to life. Likewise, Mariathas says his coach, Sisson, has been invaluable throughout the process.

“He’s the reason that I’m in this competition. He got me into this and got me where I am right now. We have a good team here at ACE, so we’re very fortunate. We have a great team of developers, some of our sales force are chefs, and we bounce ideas off of all of them. It’s a great foundation for these types of things.”

Sisson says getting the news that Mariathas would represent Canada at the Bakery Masters in Paris was a stand-out moment for him.

“We’re extremely proud. I mean, there’s no other words to describe it. Having someone like Marcus who stays very true to the roots of artisan baking, his passion for this side of the industry is incredible. If I said he worked 70 hours a week, I’m probably shy by 10 or 12. It’s all about bringing young people into the industry.”

Mariathas and Sisson travelled to Edmonton in December to practice alongside Dumonceaux. Although the two will compete in different categories, the support and advice they give one another is vital in the lead-up to the main event. As the first Canadian bakers to ever embark on this journey, they are feeling the pressure.

“It’s ever present on your mind and quite wearing on you physically and emotionally,” explains Dumonceaux. “Unless you’ve done it, people don’t understand the toll it takes on you. The last thing you want to do is not represent your country well, so there’s a lot of pressure to perform.”

Mariathas agrees. “We’re going to share some synergies, practice in the same location, and travel together. Even though we’re competing independently, we’ll be the Canadian contingent together.”

Editor’s Note: The Masters de la Boulangerie competition was ending as Bakers Journal was hitting the press. Unfortunately, Alan and Marcus did not win in their respective categories. Nutritional went to Netherlands, Gourmet to France and Artistic was claimed by Taiwan.