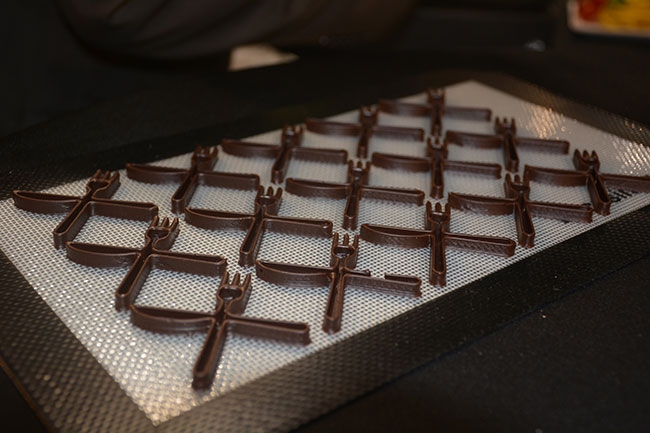 Milan, Italy, a city that brims with history and bustles with industry, provided the perfect setting for HostMilano, an equipment, coffee and food exhibition that showcased traditional baking and pastry artistry alongside technological innovation.

Held in October, the show was touted as a one-stop shop for food-service buyers. A tour de force of organization, the show welcomed 2,000 companies from 52 countries, and 187,602 visitors, of which about 40 per cent hailed from 177 countries outside of Italy. More than a dozen halls dedicated to pastry, gelato, bread, pizza, pasta, coffee, tea, vending and tableware provided inspiration and ideas businesses can use to save time, money and labour, and help them stand out from the crowd.

I was there on a recon mission of sorts to see what the show had to offer the baking industry and perhaps suss out future trends. I began by strolling two halls dedicated to pastry and gelato halls in search of new products, trends and inspiration. Thinking to take in the big picture, I was instead immediately drawn in to the Silikomart booth, whose silicone moulds caught the eye of baker Katherine Howe, of Ipswich, England, who was on the hunt for holiday ideas. Row upon row of silicone moulds designed for both hot and cold applications were on offer in pleasing designs. Among the company’s newest designs is Water Drop, a 1200-millilitre mould that simulates the ripple effect of a drop into water. It was used by Team Belgium when it competed in last year’s Coupe du Monde de la Pâtisserie. Another mould in the new collection is the Tourbillon, which produces a grooved, turntable-like design perfect for the top of round cakes.

GELATO APPEALS TO THE EYE
Canadians know pizza and ice cream go together; clearly Italians believe it too. Gelato is a force to be reckoned with in Italy, and at least a dozen exhibitors had mixes available for sampling in colourful, crowd-drawing cases that prove we do indeed “eat with our eyes.”

Among these were Rubicone, whose Spiral Ice blue gelato, naturally flavoured with spirulina extract, a type of microalgae, prompted lineups at the tasting counter; and Cuor di Gelato, whose powdered gelato bases in natural, traditional and vegetable fibre are designed for quick preparation. PreGel, highlighted its Halloween and other themed gelato formulations and shared details of its customizable “New Cookie Idea” mix for a cookie-textured tart that can hold fillings of various textures. Bakers can create their own fillings or choose from a dozen crust, filling and decoration combinations. One example from the company’s recipe book is Frollis Gluten Free flavoured with chocolate pannacrema, featuring Otto Caramel Biscotto Arabeschi filling and Chocolate Vellutina decoration.

Several exhibitors presented gelato freezer display cases that treated food as theatre. These futuristic glass-domed cases contain machines that allow customers to watch as gelato is mixed before their eyes. Frigomart’s C124 vertical countertop batch freezer was touted as a starting point for operators looking to produce quality gelato, ice cream and slush in small quantities and with relatively low up-front investment. Using a ready-made mix, it produces about five kilograms, or three to four batches, per hour. Compact and visually appealing, it was designed with restaurants, pastry and coffee shops in mind, Frigomart representatives shared.

HIGH-TECH HEAT
Six halls were dedicated to bread, pizza and pasta and the equipment that serves those industries. On display were several high-tech ovens designed to make shift changes smoother by giving staff various baking programs to activate. Unox’s BakerLux and BakerTop models were examples of this strong trend. Their innovative features include metal alloy plates that help the ovens retain the moisture needed in so many pastry applications.

Alto-Shaam had on display its CT PROformance 7-20 Combitherm oven suited to high-production kitchens. Users can place it on a stand or stack two together to save space. The company, headquartered in Menomonee Falls, Wis., has a Canadian division.

In another display of food as theatre, Belshaw Adamatic’s Donut Robot tempted floorwalkers with the scent of fresh doughnuts that came straight out of the fryer and into their waiting hands. The automatic fryer makes yeast-raised cake doughnuts touted as having better quality than standard frying because they absorb less oil. The machine comes in three different sizes and makes up to 110 dozen donuts per hour. The fryers deposit, fry, turn and dispense cake doughnuts or mini doughnuts automatically, and may be operated by staff after minimal training.

On a smaller scale, Electrolux Professional’s SpeeDelight demonstrations got plenty of attention. The new high-speed grill has been winning awards, including the Plus X, which rewards innovation and accessibility. It is designed with handy features to deliver a variety of grab-and-go dishes three times faster than traditional sandwich presses. Thinking of expanding your bakery to a café? The company played up not only the countertop machine’s speed – it prepares pizzas, wraps, pasta, pastries, vegetables in under a minute – but also its versatility for serving customers at all times of the day. Its contact plates use infrared and microwave technology to cook food in a way that keeps it crisp, while the upper plate is designed to settle on food with just the right amount of pressure and open automatically when ready. The smart machine has a USB port and Wi-Fi capability to allow operators to track, store, upgrade and share cooking menus.

Bocusini’s new 3D food-printing system, the Pro 3.0, was at work creating these lovely, consistent moulded chocolates. The machine works with fondant, marzipan, pasta, sausage and many other malleable formulations.

HEALTHY FLOURS AND ROMAN PIZZA CRUST
Although ovens and kitchen equipment dominated the show, I found a few ingredient gems, including ItalMill’s innovative flours. The company, based in the nearby town of Cologne, was showcasing its sourdough and Riso Venere (Black Venus) flour through delicious roman pizza crust sliced horizontally to create a crisp mortadella sandwich. The company, which started out in the pastry sector, now serves bakeries and pizzerias as well. Its natural sourdough flour is higher in lactobacilli and thus sweeter, said company representative Sabrina Bellini. The Black Venus flour, which is rich in antioxidants, minerals and fibre, solves the problem of lengthy fermentation time, she said. Roman pizza dough, I was told, typically takes four days to ferment as it is made up of 80 per cent water. That fermentation time is reduced to 24 hours when using ItalMill’s formulation.

STORAGE SOLUTIONS
Storage and delivery can be pain points for smaller bakeries and the show featured some interesting options to solve these issues. The folks from Cambro, a California-based company, were there with some cool wheeled storage options for restaurants that are especially suited to caterers. The newest cabinet on display was the Cam GoBox, which holds several polypropylene bins of hot or cold food safely for many hours and is unaffected by oil, grease and most chemicals.

CaterTeam Food Service Equipment had its CookTek food storage bags on display. The insulated, washable nylon bags – collapsible boxes – contain a lightweight thermal disc. When the bag containing the disc is placed on an induction charger base, it automatically heats up. The three-part system bags, disc and charger is designed to keep food hot for 30 minutes.

3D PRINTING STIRS IMAGINATION
At such a forward-looking event, I fully expected to see 3D printers and I was not disappointed. The Bocusini Pro 3.0 was at work creating lovely and precise moulded chocolates. The printing system consists of a printer and 25 by 15 centimetre work surface, software and, if desired, food formulations specially designed to work with the Bocusini.

The machine helps you create personalized food – pasta, sausage, chocolate, fondant and almost anything else you can think of – to set your business apart from the competition. In addition to cranking out 3D objects, the system allows you to incorporate text messages, logos, handwriting and plate tattoos into your creations. A side note: almost as interesting as the demonstrations were the creations found in the company booklet: tiny pasta lobsters, fondant sports cars, delicate mazes made of goat cheese and a curly mashed-potato octopus.

COMPETITIVE CHEFS
Complementing all this innovation on the show floor were the World Trophy of Pastry, Ice Cream and Chocolate competition; cake designer world championships; and sugarcraft demonstrations in the well-trod pastry hall.

All this laser-focused creativity and competition buzz made for a stimulating last day at the show, which ended on a high note as Italy claimed victory over China, Japan and 18 other teams from around the world amid boisterous chants of “It-al-ya!”