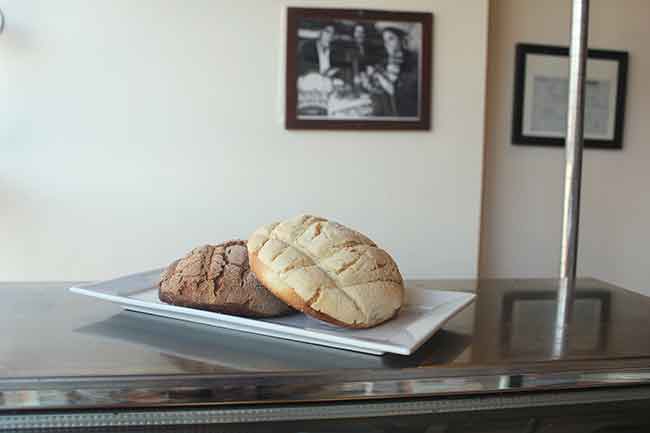 The concha, made by Pancho’s Bakery, is a sweet bun traditionally eaten for breakfast in Mexico. Photo Credit: Laura Aiken

Mexico has always been a celebratory nation and sweets play a major role. Spain brought the people of Mexico their love of pan dulce or sweet breads. Soon, fields of wheat grew outside of Mexico City to keep up with demand. During France’s short occupation (1864-67) there were more than 50 bakeries, 120 chocolate and pastry shops and over a dozen specialty cake shops in Mexico City alone.

THE HOLIDAY SPIRIT
Many of Mexico’s holidays include special pastries and desserts meant to be shared at the celebration. Nov. 1 is the Day of the Dead, when Mexican people remember loved ones who have passed.  Far from being a solemn day, Mexicans throw a party. Altars are filled with foods offerings for the departed and surrounded by yellow marigolds. The bread for this day is called Pan de Muerto or Day of the Dead Bread. The round, sweet loaf, with orange flavouring, has additional pieces of decorative dough around it shaped into teardrops and bones representing sorrow and death. Small sugar candy skulls are on display, decorated with colourful floral motifs. Chocolate skull sculptures are also popular.

At Christmas time, Mexicans enjoy buñuelos. The sweet fried fritters are paired with hot chocolate. On the Epiphany, Jan. 6, the ring of the kings bread or rosca de reyes is served. Known as the day the three wise men came to visit the baby Jesus, the sweet bread not only contains candied fruit, but a little plastic doll representing the baby. Whoever finds the doll in their piece of bread throws a party for everyone on Feb. 2.

Cinco de Mayo is a celebration of the victory of the Mexican army against the French invasion in the State of Puebla. In the United States, Mexican- American people bake and enjoy corn bread. In Mexico, any traditional Mexican dessert or pastry can be found such as baked flans, empanadas, rice pudding and cookies shaped as pigs.

BRINGING MEXICAN FLAVOURS HOME
In Canada, ethnic desserts appeal to consumers’ more adventurous palates. Pancho’s Bakery in Toronto opened its doors in 2009. Today the business has expanded to three locations and two food trucks. Owner Adalberto Aguilar grew up in the industry. His family started their first bakery in Mexico in 1927.

Pancho’s bills itself as the home of the churro – the traditional Spanish creation was adopted by Mexico. “We took the idea and made it better!” Aguilar exclaimed.

In Spain the churro is served plain, but in Mexico it is a sweet dessert. Making churros starts with a cinnamon dough made in a similar fashion as choux paste, pressed through a star tip, straight into hot oil and fried. Unfilled or filled with chocolate, caramel or jam, the Mexican churro is always rolled in a cinnamon and sugar mixture and served warm.

Poncho’s does a brisk business in empanada sales.  The word empanada comes from the Galician, Portuguese and Spanish verb empanar, meaning ‘to wrap’. Each local region of Mexico has its own special recipe for empanada dough.

The pastry can be made with wheat flour, corn flour or yucca flour. Filling can be either savoury or sweet. Popular fillings include meat, chicken, cheese or vegetable. Sweet fillings include pumpkin, sweet potato, yam or fruit.

Aguilar’s favourite pastry is the concha. In traditional Mexican fashion, he eats them every morning for breakfast. The sweet dough buns have a thick topping made with equal parts sugar, flour and shortening. With the same consistency
of cookie dough, the topping is rounded, flattened and placed on top of the concha before proofing. Conchas are decorated with slashes, made by a specialty cutter or created by hand with a plastic bench scraper to represent a seashell. The bakery sells three flavours: plain, chocolate and vanilla.

Other popular desserts are rebandos, which are similar to biscotti but softer because they are baked only once, and orejas, which is the Mexican version of the palmier.

Another item not available from the menu, but made by special order is the tres leche cake or three milk cake. Soaked in a mixture of three milks: homogenized, sweetened condensed and evaporated milk, with the addition of rum, the cake rests overnight to absorb the flavour.

The concha, made by Pancho’s Bakery, is a sweet bun traditionally eaten for breakfast in Mexico.

DESSERTS AND FINE DINING
Mexican products are also merging into desserts in a dining setting. Trey Foshee, executive chef and co-owner of George’s At The Cove in the tiny neighbourhood of La Jolla in San Diego, Calif. was inspired to bring Mexican flare to his desserts during a culinary trip to Paris in 2003. His very last meal on the trip, and the dessert served, would change everything.

“It was basically a reconstructed margarita. I realized I should be looking in my own backyard for inspiration,” Foshee said. Soon afterwards desserts like chocolate pot de crème with a churro across the ramekin were on the menu.

At the time, Mexican food did not appear on fine dining menus, even in San Diego, but George’s At The Cove thrives on innovation.

“I’m a big fan of mezcal, but a lot of people have never tried it,” said Foshee, referring to the Mexican spirit made from the cores of the agave plant or piña, which is roasted and smoked in the earth over hot rocks. “If you put it into something like ice cream it makes it more palatable for people to first try it.”

“I incorporate many ethnic ingredients into my dishes, especially Mexican ingredients,” said Lori Sauer, who has been the executive pastry chef at George’s At The Cove for over five years. The mezcal ice cream is used in her mango float with ginger beer and as an accompaniment to deep fried pastries called sopapillas with piña, clove honey and coriander. Her chocolate ganache is made with guajillo chile and served with avocado and lime. Figs take on an enlivened flavour  with caramel, paired with cinnamon and hoja santa (also known as the root beer plant) brioche with chevre ice cream

Foshee’s philosophy is about making the dining experience memorable. He noted that when a customer tries something new or even something familiar served in a different way, they tend to remember it.

Bakers and pastry chefs are often the bookends of the eating experience. Not only are they creating the first thing the customer eats, be it a breakfast pastry in the morning or the bread served with dinner, but they are also making the last course with dessert. With the rise of interest in ethnic cuisines, traditional Mexican desserts and Mexican products used to heighten flavours may give just the spin to make each bite more memorable.