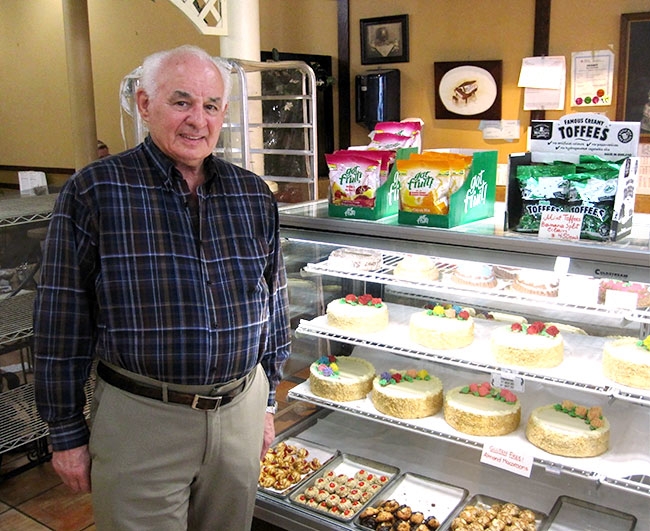 Alain Notte, former owner/operator of Notte’s Bon Ton in Vancouver. He still works at the bakery.

Notte’s Bon Ton Bakery will soon mark its 85th year in business in Vancouver, B.C. Since first opening in 1933, it hasn’t always been in the same location, but as the decades have rolled on, it’s retained the same charming character and adherence to pastries, cakes and other desserts made in traditional, time-tested ways.

Notte’s has also retained a familiar face behind the scenes for much of its history: Alain Notte, a second-generation Canadian whose father, Oreste Notte, initially emigrated from France to the United States as a teenager but didn’t like New York City and decided to try Canada. He moved to Montreal and landed a job with the Canadian Pacific Railway. He got sent from Montreal to Niagara Falls, and then from there to the iconic Empress Hotel in Victoria, B.C., where he worked as a pastry chef. “He was working at the Empress when they started the tradition of serving high tea in the afternoons,” Alain said.

The roots of Notte’s Bon Ton (“bon ton” means “good taste” in French) stretch back even earlier, to 1926, when Oreste left his job at the Empress to go into business for himself in Victoria. Alain’s mother, Agnus, also emigrated from France, but she was very young at the time – just two years old. Her family returned to France for several years but wound up moving back to Canada. Agnus, 19 at the time, met Oreste in Victoria. In 1930, they married and decided to move to Vancouver, “where my father was the boss in the back, and my mother was the boss out front,” Alain said with a smile.

Mainland Success
Oreste and Agnus Notte moved to Vancouver because its much larger population would be better for business. The moved worked out well and their family grew to include four children – three boys and a girl. Alain and his eldest brother, Alessandro, both chose to enter the family business. When asked about how he learned to be a pastry chef, he said, “I trained the hard way – under my father!”

After moving to the mainland, Oreste quickly made quite a name for himself as a pastry chef, winning a gold medal in 1952 at a culinary arts competition in Seattle, Wash. Alain proudly displays his father’s medal and certificate on the wall of the bakery’s current location at 3150 W. Broadway in Vancouver, which opened its doors in 1998 after being located next to the Orpheum Theatre on Granville Street for 65 years.

Alain said it wasn’t always a sure thing that the bakery would remain in the family after Oreste retired, as he and Alessandro both moved to Switzerland to study the hotel business. Although they both received degrees in hotel management, and Alain worked for a time in restaurants and bakeries in Austria, Italy and the United Kingdom – “I had great experiences in Europe,” he said – the Notte brothers were called home to take over the bakery from their father.

Alain Notte, former owner/operator of Notte’s Bon Ton in Vancouver. He still works at the bakery.

Today, Notte’s Bon Ton employs about 10 people – six preparing food in the back, and four front-of-house staff members. In the past, the bakery employed more people to keep up with its busy catering-supply business, but in recent years it’s narrowed its focus to solely retail. “All the caterers and big clubs have their own pastry chefs now,” he said, explaining why Notte’s Bon Ton decided to change its business model.

Although Alain and Alessandro sold their ownership stakes in the business to Alessandro’s son (Alain’s nephew), Alain continues to be closely involved with the business (Alessandro has retired). “I’m in here everyday,” he said. He’ll likely continue to do so – longevity runs in the family. “My mother just passed away last year at the age of 110,” he said, “and before she died, she was still telling us what to do. She always ran the front of the shop.”

Alain has a son, but his son chose not to follow in his father’s footsteps because of a nut allergy. “He went into the commercial painting business and has done very well for himself,” Alain said.

Staying True to Roots
Notte’s Bon Ton doesn’t bake bread but it does produce savoury treats such as croissants and brioches, and it usually doesn’t stray from tried-and-true formulations.

“We’ve maybe added a few things over the years here and there but we’ve always kept our products limited to the traditional ways,” Alain said. “We get the same customers coming in all the time. They like the pastries but their favourite is what we call the Diplomat Cake. It’s three layers of puff pastry, two layers of sponge, with a rum syrup on the sponge cake, and it’s all rolled in butter cream, which is made of pure butter. And we don’t use any essences of liqueurs whatsoever. Whenever we say a liqueur is in something, it’s the liqueur, not the essence of something.”

Notte’s Bon Ton makes a smaller version of the Diplomat Cake that can be used as a birthday cake. “The only difference is that the birthday-cake version has a little bit more liqueur in it,” Alain said with a chuckle.

Alain said the bakery hasn’t really done much over the years to celebrate its longevity. “We just keep going,” he said. “It’s wonderful to have so many third-generation customers coming in. It’s because the quality of our products is still there and has been there all the time.”

People notice such commitment to quality, Alain said, and they return to the bakery time and time again when they have occasions to celebrate. “I had a lady come in here to order a wedding cake for her daughter. I said, ‘Sorry, we’re fully booked.’ She said, ‘You can’t refuse this. You made my parents’ wedding cake, you made my wedding cake, and now you’re going to make my daughter’s wedding cake. You have no right to refuse it!’ We have a lot of people like that.”