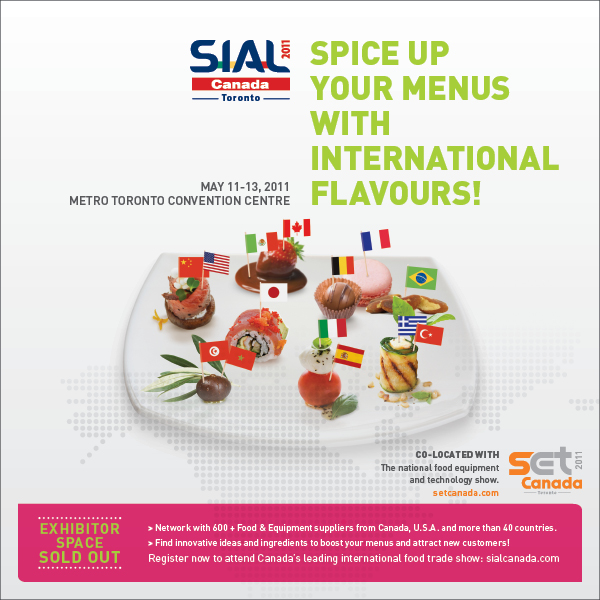 April 16, 2009, MONTREAL – The 2009 edition of the North American Food Marketplace (SIAL Montréal) and the Services, Equipment and Technology show (SET Canada) was a resounding success.

The feedback received from exhibitors and visitors has been positive, with comments focusing on the quality of SIAL Montréal and SET Canada and their position as must-see events for all North American agrifood professionals.

Xavier Poncin, director of SIAL Montreal and SET Canada, says that the show's success was due to its unique positioning as an international exhibition on Canadian soil and its integration as part of cohesive worldwide events, Groupe SIAL (Paris, Shanghai, Buenos Aires and Montréal). He also declared that the success of this event, in spite of a difficult economic period, was made possible thanks to its loyal partners and clients (exhibitors and visitors).

Thriving figures
This 2009 edition welcomed 12,043 agrifood professionals from all Canadian provinces, the United States and 52 other countries. The show hosted some 520 businesses from Canada and the U.S., as well as 30 countries, with an international offer representing 45 per cent of the exhibition. This edition had the remarkable presence of 12 new countries such as Brazil, Tunisia, Cyprus, Taiwan, Mexico, and Jamaica. Canadian provinces were well represented with exhibitors from Quebec, Ontario, Prince Edward Island, British Columbia, Nova Scotia, Manitoba, Alberta and New Brunswick.

The Olive d’Or Contest
SIAL Montréal also hosted this year the third edition of the international olive oil contest Olive d’Or. Strengthened by the success of the second edition, there were 100 olive oils participating in the contest from 13 different countries. The Olive d'Or area generated tremendous interest from restaurant and food distribution professionals.

Groundbreaking educational programs
Much more than a basic professional exhibition, SIAL Montréal is also a learning experience and a means to reflect and better understand the complementarities of the food, nutrition and health fields. This year, several issues of concern to consumers were put forward during the Agora Nutrition such as the “Childhood Obesity” symposium presented by the Danone Institute which enjoyed great success.

SIAL Montréal is an international professional food trade show which is part of the SIAL international network with four shows on four continents, 7,500 exhibitors from over 100 countries and 200,000 visitors from more than 200 countries. For more information, please visit www.sialmontreal.com or www.setcanada.ca.