From classic French pastry to homestyle desserts, this vibrant city has it all 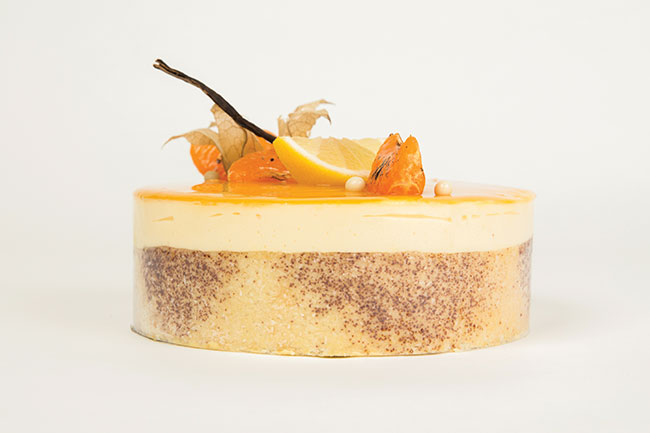 Montreal is full of bakeries and pastry shops. While many are based on classic French traditions, others offer home-style creations. The choices are endless.

DUC DE LORRAINE
Montreal’s oldest French pastry shop is Duc de Lorraine. While ownership has changed, the pastry chefs still use the same original recipes that were part of the repertoire when the shop first opened in 1952.

“It’s a three-day process to make our croissants,” says Elie Azzi, the pastry chef at Duc de Lorraine. “On the first day the water, milk, flour, sugar, yeast and butter are mixed together.”

Azzi says the dough is allowed to rest overnight. The next day it is laminated using a European butter containing 84 per cent milk fat. “The lamination process consists of a double fold, and then a single fold, while allowing the dough to rest for 30 minutes, in the fridge between folds. Next, the dough is shaped into our signature croissants and put in the freezer to rest. On the third day the croissants are proofed and baked.”

“During the week we produce 2,500 butter croissants,” says owner Victoria Sorensen. “They are purchased as early as 6:30 in the morning, when they are still warm from the oven.” As for desserts she says, “Our classic millefeuille is a top seller, with customers purchasing approximately 500 per week, along with 400 Napoleons.”

While couples can order a variety of beautiful custom-made wedding cakes for their special day, many opt to include an impressive croquembouche for the centre of their dessert tables. “Our most sought-after flavours are vanilla, coffee and chocolate,” Sorensen says.

FOUS DESSERTS
When the original owner decided to sell Fous Desserts, Hiroko Fukuhara, already in charge of administration, and Carolle De Boisvilliers, the pastry chef, signed on the dotted line. “For more than 20 years Fous Desserts has been known for our croissants and chocolatines,” Fukuhara says. “Our Viennoiseries are made by hand every morning. We use pure butter, organic flour and local honey.”

Says De Boisvilliers, “I take my inspiration from classical French desserts and add my own personal touches.” Some of her favourite combinations are chocolate with fruit, vanilla with nuts, and raspberries with kaffir lime.

Maracuya, a mousse cake, is made with passion fruit, orange and lemon, with vanilla cream and coconut Mona Lisa biscuit. The Croquant is a dark, rich, chocolate mousse, with crunchy hazelnut crisps, on a thin almond dacquoise.

Chocolates are made with premium Valrhona. These include fresh ganache squares with fruits, spices and teas. Pralines made in house include almond, pistachio, pecan nuts and sesame. 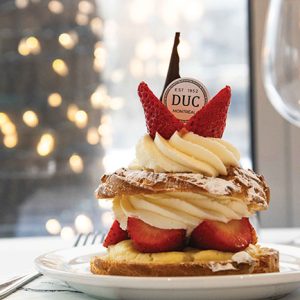 Pastry chefs at Duc de Lorraine still use the same original recipes that were part of the repertoire when the shop first opened in 1952. Photo: UC DE LORRAINE 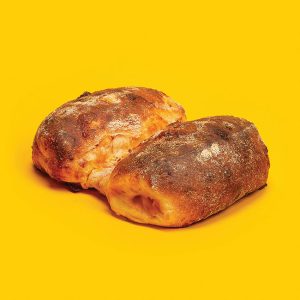 Customers of Boulangerie Guillaume are particularly fond of the Fesses Patates Cheddar, named for the shape. Photo: BOULANGERIE GUILLAUME

FROMENT ET DE SèVE
In 1995, the Froment et de Sève bakery was founded by Quebecoise baker René Sicard, who made a small selection of fine breads and pastries. In 2014, it was sold to the Callies family from France. Today, there are more than 60 employees, and two locations, producing more than 400 products.  Yet, the bakery still maintains its original, classic recipes.

Using high-quality ingredients, from real butter to Cacao Barry chocolate, Alain Bollier is the production chef, who oversees the creation of the delicious Viennoiserie. “The chocolatine is our best seller, because she is huge!” exclaims owner Constance Callies. “We use three different kinds of chocolate, which gives it a unique taste. Then, there are the croissants, full of butter and love. For our maple croissants, we fill the inside and top with pure, organic maple syrup. No other bakery does that because of the cost.”

Pastry chef Marie Le Mintier heads up both the pastry and the chocolate/biscuit production. The Lemon Basil Delight is a pastry on a Breton shortbread crust, filled with basil-infused lemon curd, set with gelatin and decorated with peaked rounds of Italian meringue.

A pure butter choux pastry is the base of the classic éclair, filled with chocolate pastry cream and topped with a centre line of whipped cream. The triangle-shaped Royal is a creamy, 70 per cent chocolate mousse, sitting on an almond and praline biscuit.

BOULANGERIE GUILLAUME
Guillaume Vaillant, co-owner of Boulangerie Guillaume, says customers at his shop are particularly fond of the Fesses Patates Cheddar, named for the shape (resembles buttocks). “They certainly represent a comfort in terms of flavours, but it is also a unique Quebec-inspired bread. The others are the Traditional Baguette, Small Sourdough Miches, and the Grano. These are the same breads that are popular with our commercial customers, along with the well-loved Ciabatta square, made with generous amounts of olive oil. The secret to many unforgettable sandwiches.”

Boulangerie Guillaume is also well known for incredible brioche. “It’s purely a basic, classic French brioche,” Vaillant says modestly. “We use 35 per cent cream, instead of milk, and a lot of butter. Then, when it comes out of the oven, we wash it with clarified butter.” 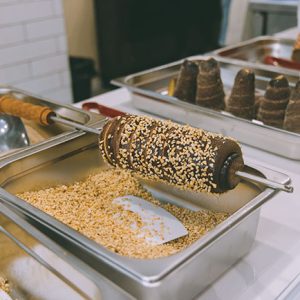 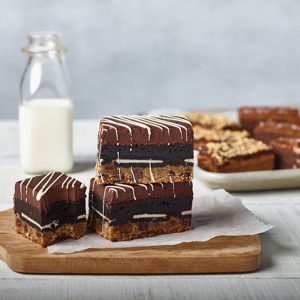 Choc’Oreo, on the menu at Rustique Pie Kitchen, features a cookie dough base, Oreo cookies, a fudgy brownie and a dark chocolate ganache. Photo: MÉLANIE BELLEMARE, FROM & CO PHOTO STUDIO

RUSTIQUE PIE KITCHEN
Of course, not all shops in Montreal are based on the classics. Mégane Bouchet-Lanat is the pastry chef at Rustique Pie Kitchen. Although she studied classical pastry in France, she likes the authenticity she finds in homestyle desserts, as well as the opportunity to explore new flavours every season.

Popular seasonal pies include the double-crusted Quebec apple, lattice crusted sour cherry pies and lemon meringue. Bouchet-Lanat also bakes off cakes, such as the traditional carrot cake, with walnuts, cream cheese icing and cinnamon. Rounding out the menu is a collection of cookies and bars, as well as granolas and take-away baking mixes.

As for her favourite creation, Bouchet-Lanat says, “My true love is chocolate, which is why my favourite dessert, is the Choc’Oreo. It is a combination of all my favourite treats: a cookie dough base, Oreo cookies, a fudgy brownie, and a generous dark chocolate ganache. The inspiration behind this was, as with many of our products, rooted in nostalgia. It’s a chocolate lover’s dream.”

“Everyone who makes these pastries adds their own secret touch to it. Our base recipe is directly from Transylvania. I worked for two to three months, with my mom and grandma, to personalize it to our taste.”

What does Kürtőskalács taste like? “It is similar to a sweet bread or brioche dough. But what really differentiates us is the texture of our pastries. It’s a dough strip that we roll around a wooden roll, let it rise and then sprinkle it with a thin layer of sugar. That sugar coating caramelizes during the baking.”

Ol’ Sweet Pastry offers six exterior toppings for traditional cone-shaped chimney cakes, including plain sugar, cinnamon sugar, Nesquik sugar, coconut, walnut and hazelnut. The cone-shaped pastry is a variation that is made from the same dough, but on a cone-shaped wooden roll. These can be filled with hot apple or cherry filling. In the summer, these cones are filled with ice cream.

Visiting Montreal is a feast of the culinary senses, with bakeries and pastry shops everywhere. After exploring, the only thing left to ponder is picking a favourite.