A Canadian accent on the French word for fine pastry 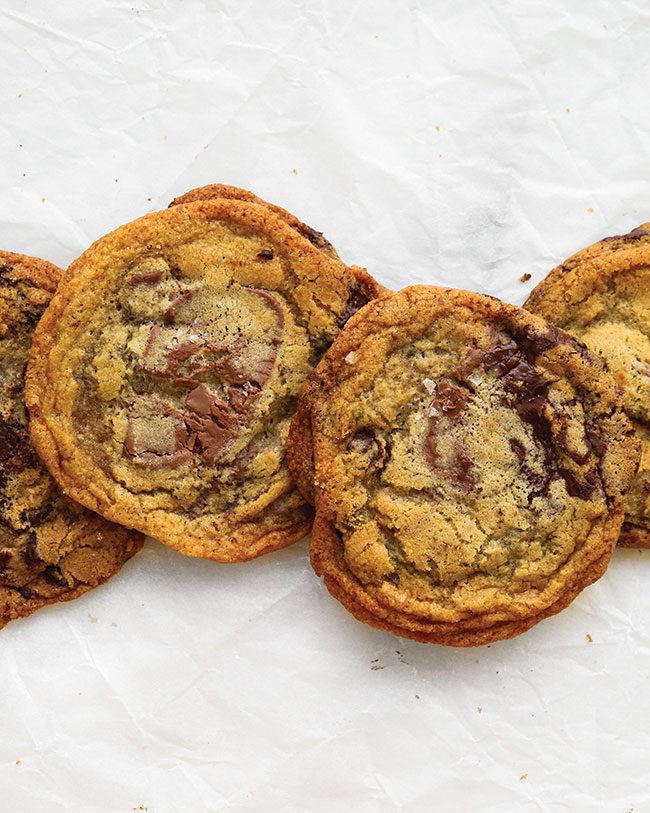 Viennoiserie is something every Austrian can claim with pride. The French were quick to embrace it, but gave credit where due; The French word “Viennoiserie” means “things from Vienna.”

Austrian born, Marie Antoinette, is said to have introduced Viennoiserie to France, when she married Louis, the French dauphin. But this is not historically accurate. The honour goes to August Zang, an Austrian who opened Café Viennoise, in Paris, in the 1830’s.

Viennoiserie is the middle ground between pastry and bread.  Two of the most recognizable items in this category are croissants and brioche. Croissants, are made from laminated pastry dough, with yeast and milk, while brioche is made with flour, yeast, lots of eggs and butter.

“To make a good croissant you have to use really good butter and allow for the time that is takes to develop,” says Betty Hung, owner of Beaucoup Bakery & Cafe, in Vancouver, British Columbia.

Hung, a former graphic designer, spent hours in the kitchen, after work, baking up pastries to sell at a local farmers market. “I decided to take a chance with professional baking, because it is really what I love to do.” And then she adds, “I wanted to work in French pastry. I was very fascinated with how particular and precise it is. It requires technical attention to detail. Within this is the foundation of all other pastries that came afterwards.”

Hung eventually quit her day job to join Beaucoup Bakery, then owned by French born baker Jackie Kai Ellis. Hung began as an apprentice and worked her way up to head pastry chef, receiving one of Beaucoup Bakery’s scholarships, to train in Paris at the famed École Gastronomique Bellouet Conseil.

Four years later, when the company went up for sale, she, and her brother Jacky (a former, part-time barista at Beaucoup Bakery & Café) bought the business. In November 2018, Hung published her first cookbook French Pastry 101, with Page Street Publishing. In it Hung shares some of her secrets to baking and makes the art of making French pastry approachable.

Hung uses a butter for her doughs that contains a milk fat content of 84 per cent, so it is not what is usually found at the local grocery store. “It is closer to the European butter and makes for the most incredible flakey croissants.”

Making croissants is a three-day process at Beaucoup Bakery & Cafe. First the starter dough is made up with flour and yeast. Then, once it rises, sugar, salt, butter, milk, and more flour are added. This rests overnight to develop flavour.

On day two, the dough is laminated. “Traditional bakeries use three single letter folds,” says Hung. “We use two double folds. Every bakery has their own way. There is no single way of doing it,” she advises.

After the dough rests, it is cut and shaped, before resting again, in the refrigerator overnight. Finally, on day three, the croissants are proofed, egg washed and then baked. 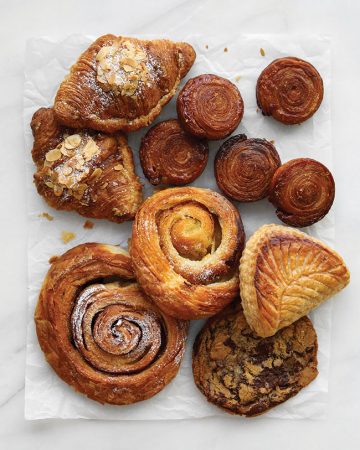 Despite fewer commuters picking up breakfast pastry on their way to work, Beaucoup Bakery & Café doesn’t skimp on its quality and variety. Photo credit: Rich Won.

Guillaume Vaillant, owner of Boulangerie Guillaume, in Montreal, Quebec, says there is no big secret to his incredible brioche. “It’s purely a basic, classic French brioche. We use 35 per cent cream, instead of milk and a lot of butter. Then, when it comes out of the oven, we wash it with clarified butter.”

Brioche is the basis of the ever-popular Vanilla Choc-Blanc Mushroom, a brioche bun in the shape of a mushroom, topped with vanilla and white chocolate. “We sell a few hundred a day,” he says. Nutmeg infused brioche dough comprises the Viennese buns, rolled in raisins and candied orange peel, then topped with icing.

For those that a looking for a treat without egg and less sugar, here is where traditional viennoiserie takes a spin. “We are particularly proud to see the Schoolboy, which is a mini-French baguette, is still popular after 10 years! It is made with a poolish, with 35 per cent cream, and three kinds of chocolates,” he says.

So how is the “l’Écolier” made? It is quite a lengthy process of between 12-20 hours. “Initially, we start by making a traditional baguette dough. The first mixture is filtered water and unbleached white flour. A combination of 60 per cent hydration. Then, we let it stand for 45 to 90 minutes.”

To this they add sea salt, yeast and a poolish. “The poolish fermentation is prepared 24 to 36 hours in advance. It is made of one part flour and equal parts water, with a tiny amount of yeast, that gives a tangy, nutty flavour,” explains Vaillant.

Kneading is done by machine for 5 minutes, to help bind the dough and form the network of gluten. “During this step we try to incorporate as much air as possible into the dough, and also to increase the heat of the total mass, so that the fermentation is as active as possible.”

The next step is assembly, “This is where the dough will take on the desired flavours. We incorporate white chocolate, dark chocolate, milk chocolate and 35 per cent cream. These are only added at the end because the sugar in the chocolates and the cream will affect the fermentation and activate it more.”

The dough then rests. In the first few hours the baker will need to fold the dough several times, which will later help the final product hold its shape. After 12 to 20 hours, the dough is ready to be portioned. “Then, we place the baguettes on a floured linen cloth and let everything grow for another 45 to 90 minutes.”

Finally, the bread is baked. Once removed from the oven the baguette is brushed in clarified butter. This transforms the crust to a moist finish, which will allow it to keep for more than a day.

Delicious, flakey, rich, and buttery. Croissants, pain au chocolate, brioche, and the modern-day Schoolboy.  These are rich breakfast treat, worth getting out of bed early for.