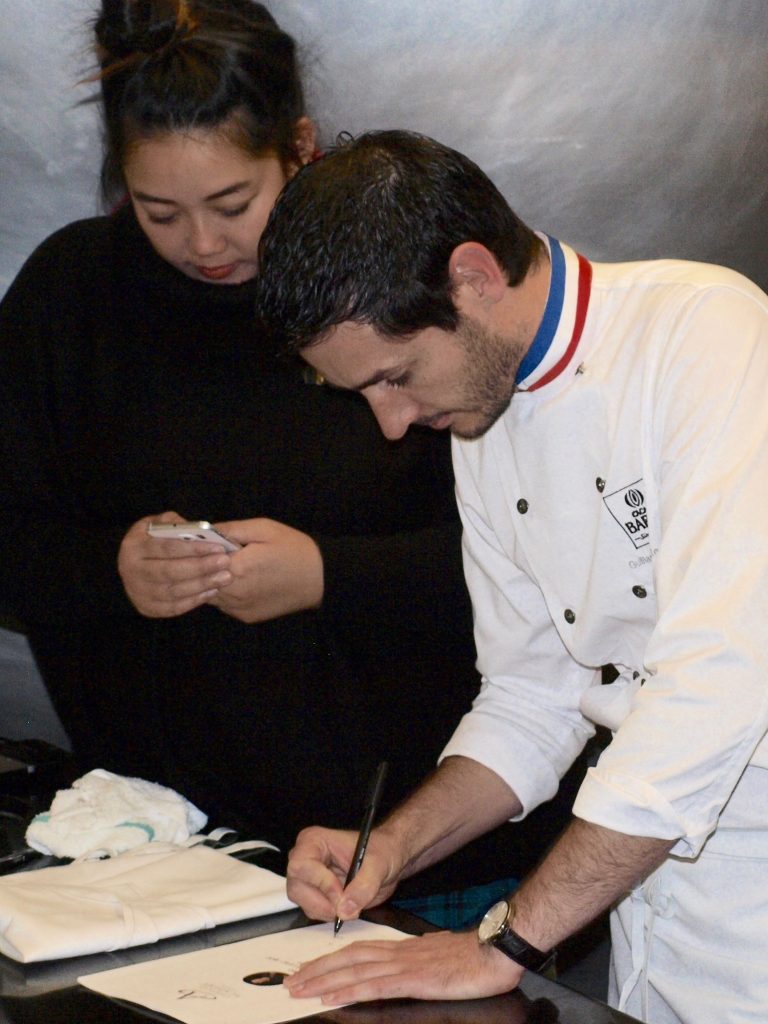 There is no language barrier when it comes to high-end patisserie.

This was clearly on display Tuesday, October 18 at George Brown College in Toronto as a capacity crowd of over 125 people attended the live demonstration by French pastry chef Guillaume Mabilleau, MOF (Meilleur Ouvrier de France Pâtissier).

Hosted by Cacao Barry, the French-speaking Mabilleau led the packed theatre crowd through five recipes including a generous multi-layer truffle (Truffe), a coffee-infused pastry with cream on a streusel base (Arabica), a layered biscuit chocolate cream mousse cake with a mirror finish (Chaos), a decadent chocolate caramel tart with a crunchy topping (Carak), and a meringue, chocolate cream and hazelnut topped sweet cake (Luna).

The experienced pastry chef’s artistry and technique were on display, and the crowd was able to follow along with his technical descriptions courtesy of a play-by-play translation provided by Cacao Barry’s Ontario regional gourmet sales manager Lotte Andersson, who generously followed along and communicated questions from the audience.

All of Mabilleau’s creations incorporated multiple layers and textures, blending smooth creamy fillings with a touch of crunch. All of the recipes incorporated Cacao Barry chocolate.

When making the caramel for his tart (Carak) he always achieves the right consistency by measuring the weight, not by temperature. While caramelizing the sugar, glucose, cream, condensed milk and vanilla bean he knows how much water must evaporate out of the mixture. He will weigh the mixture and add water if necessary to achieve the optimal final weight.

Mabilleau, owner of Nuances Gourmandes, a patisserie in southwestern France, is in high demand. Following the Toronto event he was off to the Callebaut Chocolate Academy (Académie du Chocolat) in Montreal for a two-day master class, and according to Andersson he is booked for demonstrations around the world through 2017.