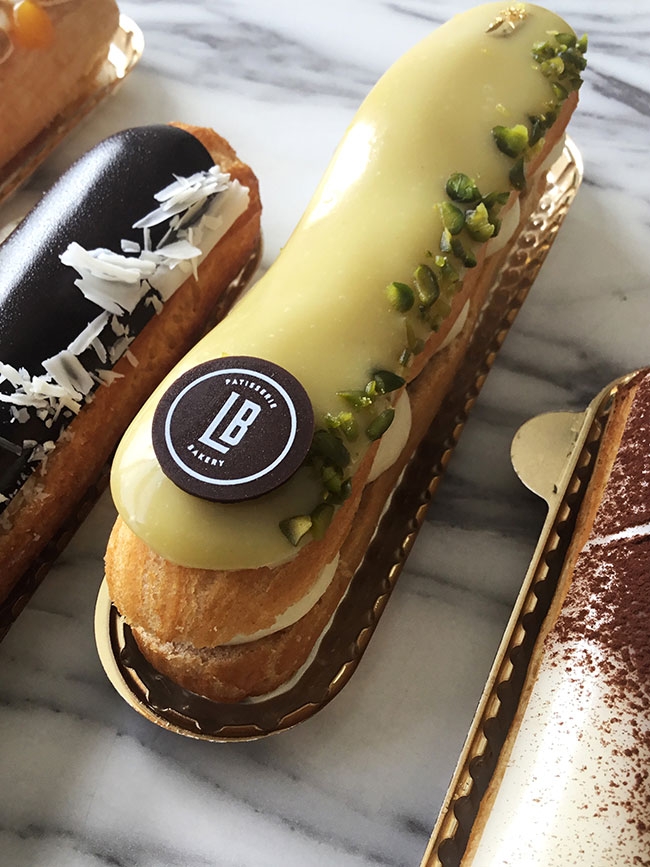 La Boule uses pistachio nuts as both a garnish and flavouring;

Inclusions and topping add flavour, colour, texture and elegant design elements to baked goods and desserts. Dried fruit, fresh fruit, a variety of nuts and candies are popular options. So, just how can bakers and pastry chefs use these items for product development and to enliven their menus?

“Inclusions take a ubiquitous item and makes it special. Everyone sells croissants these days, but do they sell cherry pistachio croissants?” asks Jennifer Stang, co-owner of La Boule Patisserie & Bakery, in Edmonton. She notes that within the last two years six new high quality bakeries have opened up in the city. Inclusions and toppings help to to differentiate her products.

Stang studied cooking at Northern Alberta Institute of Technology and obtained her Red Seal. But pastry had its pull and soon she switched from the savoury side of the kitchen to the sweet. Stang opened the bakery, with her business partner and mother Roseanne Stang-Tarrabain, in 2017.

The pan de raisin at La Boule Patisserie & Bakery is rolled, cut and shaped before adding raisins. “I have more control over how many raisins go into each roll this way, keeping it more consistent,” explains Stang. The raisins are soaked in rum to keep the dried fruit plump during baking.

After studying Baking and Pastry Arts at George Brown College, in Toronto in 1997, Walter Sallese spent many years honing his skills. Then, he and his wife Azumi Kimura , a fellow pastry chef from Japan, opened Patisserie 27, in the Bloor West Village area of Toronto, in 2011.

“We use dried apricots macerated in apricot liquor and dried plums soaked in dark rum in our pound cakes,” says Sallese. Using dried fruit in these cakes helps to promote the keeping quality of the products. “The cakes keep refrigerated for up to one week,” he says.

Over at Willow Cakes & Pastries in Niagara- on- the- Lake, Ont., the bakery uses a lot of dried cranberries. “We use them in our scones and muffins. We do not soak them before using, because we find it changes the texture of the dough or batter. We also make white chocolate cranberry truffles. Again, we do not soak the cranberries, as it softens the chocolate,” says Catherine O’Donnell, pastry chef and owner.

La Boule uses pistachio nuts as both a garnish and flavouring;

Living and working in the fruit-rich Niagara Region has its advantages. “Ninety per cent of our desserts contain fresh fruit. And the fruit changes with the season. I love raspberries, because they enhance the flavour of the product without changing it.” The caramel raspberry cheesecake is one such popular item made with the berries

“Cherries are also great, but you have to pit them,” continues O’Donnell. “We put them into items like our cheesecakes, but to garnish, we leave them whole with, the stems attached. We also add fresh cherries to pound cakes. “

As for strawberries, Willow Cakes & Pastries offer a pink champagne cake, which contains chopped, fresh strawberries added to the buttercream.

“Fresh fruits, as inclusions and toppings allow our bakery to convey the changing seasons” says Sallese “For the most part, each fruit is used for a limited, time, thus creating a sense of anticipation.” Other fresh fruit danishes, apricot glazed berry tarts, fruit tarts and fruit garnished cakes are created with what is local and seasonal.

At La Boule Patisserie & Bakery Stang points to her popular “cruffin,” a muffin-shaped pastry made from croissant dough, filled with fresh peach compote and topped with peaches. “We are becoming more in touch with our local farmers,” says Stang.  “I’m thinking of ways to incorporate Saskatoon berries and honey berries into the menu.”

As for nuts, Stang says, “I always try to top the bakery items with ingredients used in the recipe. That way customers can see what it has been made from, especially when it comes to nuts.”

O’ Donnell likes to use pecans, as a base for cheesecakes or lemon mousse.  The nuts are mixed with butter, sugar and rolled oats. Walnuts are mixed into her banana breads and chocolate zucchini cakes.

All three businesses agree that chocolate is the top candy inclusion and when it comes to other forms of candy, they prefer to make their own in-house.

As for other candies Sallese says, “We make Veneziana, a brioche with candied orange.  We candy the orange by boiling strips of peel and sugar. Then, we cube it, and add it to the dough and finish it with almonds.”

Stall tops her carrot cakes with carrots, which are candied in simple syrup, then dehydrated, resulting in a flower shape. “They do so on their own volition,” she says, with a laugh.

Bakers and pastry chefs can create a multitude of products unique to their businesses, by using a wide variety of dried fruit, fresh fruit, nuts and candies. Creativity knows no bounds.