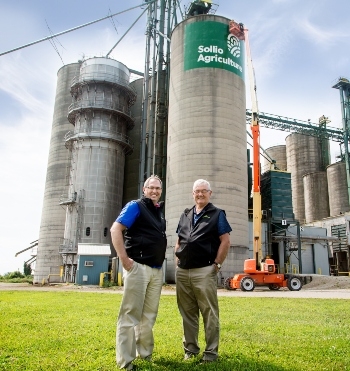 A new Sollio Agriculture sign has just been erected at the Talbotville grain elevator.

This change marks the final step in Sollio Agriculture’s acquisition of Cargill’s crop inputs and grain handling facilities in Ontario, which was announced in March 2018.

The sale included 13 crop inputs and grain handling facilities as well as Cargill’s 50 per cent stake in South West Ag Partners, a joint venture that operates grain and crop inputs facilities in Ontario and the Talbotville grain elevator.

Built in the 1960s, the Talbotville grain elevator employs five people and is specialized in grain handling and conditioning services for local grain, corn, wheat and soybean farmers.

With annual sales of $2.125 billion and close to 1,100 employees in nine Canadian provinces, Sollio Agriculture supports farmers operating in an increasingly demanding context due to numerous economic, regulatory, technological, generational and climate changes.