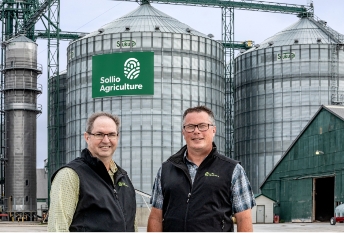 A new Sollio Agriculture sign has just been erected at the Becher grain elevator, located at 1507 Lambton Line, Wallaceburg, Ontario.

Built in the 1960s, the Becher grain elevator employs 6 people and is specialised in grain handling and conditioning services for local grain, corn, wheat and soybean farmers.

With annual sales of $2.125 billion and close to 1,100 employees in nine Canadian provinces, Sollio Agriculture supports farmers operating in an increasingly demanding context due to numerous economic, regulatory, technological, generational and climate changes.