Specialists share their approach to this smooth, rich, appealing dessert 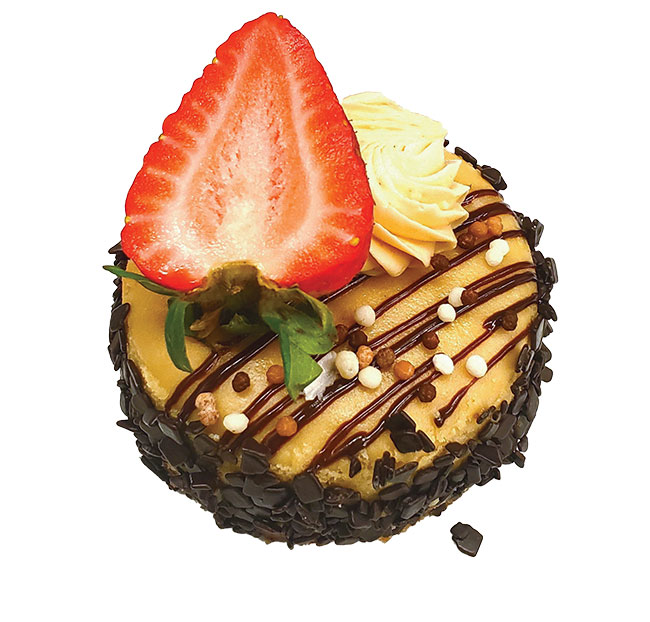 In 1872, William Lawrence, a dairyman in Chester, N.Y., was the first to manufacture large quantities of cream cheese. The ease of purchasing this ingredient was the beginning of New York-style cheesecake as a popular staple in restaurants.

Why does cheesecake appeal to so many? “It’s a bit of a gourmet dessert. It feels like you are treating yourself, because it is so rich and smooth,” says Daniel Sims, owner, and head baker of Cheesecake Etc. in Vancouver, which opened for business in 1979.

Sims describes his company as a late-night dessert café, with hours of operation from 7 p.m. to 1 a.m. The 50-seat establishment sells over 420 cheesecakes per week. Sixty per cent are sold by the slice, while the rest are bought whole for takeout.

Cheesecake Etc. was opened by the late Mike and Edith Sims, two musicians who wanted to create a sweet after-hours environment. Sims says the key to maintaining the family’s successful business over the years is specialization. “Many businesses start to diversify so much that they move away from their original concept,” he concludes.

Mike Sims found a New York-style cheesecake recipe in the newspaper back in the 1970s. Through trial and error, the classic Cheesecake Etc. cheesecake was developed. “It still contains the standard ingredients with eggs, sugar, vanilla, and cream cheese, but we have lightened it up, so that it is not as dense,” Daniel says. “Our signature cheesecake is vanilla with strawberry topping and whipped cream. This is what I like to suggest to first timers. Also, our cheesecake has always been crust-free, which is now great for gluten-free diets.”

One cheesecake that is always demanded by customers is the matcha, created by using matcha powder. “It’s an acquired taste in my opinion, but it is popular,” Sims says.

And what is the secret to a crack-free cheesecake? Sims says it is to make sure that the oven is not too hot and to not open and close the oven doors too often. 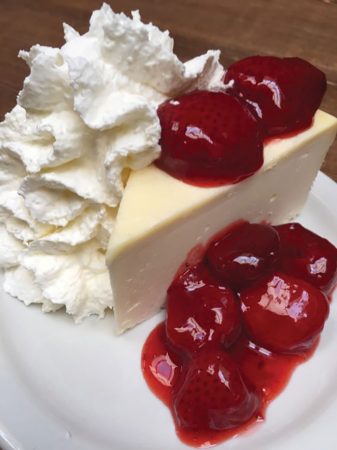 Mike Sims found a New York-style cheesecake recipe in the newspaper in the 1970s. From that recipe the classic Cheesecake Etc. cheesecake was developed. These days the matcha (top, left) is in high demand, says Daniel Sims, owner and head baker. Photos: Cheesecake Etc. 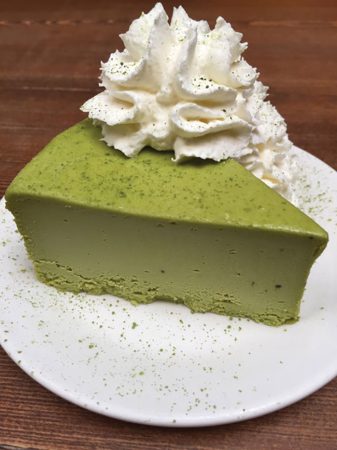 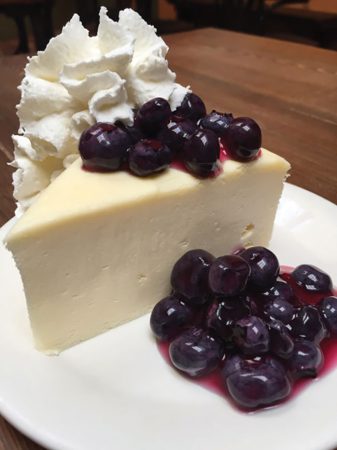 Colin and Joanne MacDougall, both worked in the restaurant business, before opening Sweet Hereafter Cheesecakery, located in Halifax. Colin was a store-bought, frozen cheesecake lover, cutting himself a piece each night for dessert. One day, he decided he wanted to make a homemade cheesecake. Joanne discouraged him. “She told me I wouldn’t be able to do it. Cheesecakes were too hard to make and that is why everyone just bought them. I took her up on the challenge,” Colin remembers.

His first cheesecake was so successful that Colin experimented, creating over a dozen varieties. By September of the same year the couple had signed a lease and were open for business.

Today, 10 years later, the 30-seat location has over 150 varieties of cheesecake, which are produced in continual rotation. All are available by the slice, but customers can call ahead and request a flavour to purchase whole. Colin estimates Sweet Hereafter Cheesecakery produces between 150-200 cheesecakes per week.

Colin gives tips for cheesecake baking success: “The reason cheesecakes tend to crack is overmixing. We don’t use a water bath, as I find it changes the texture to almost gelatin-like. We make the cheesecakes assembly-line style, before baking. Once baked, we let them rest for an hour at room temperature, before putting them in the fridge to chill.”

Peanut butter chocolate cheesecake starts with a base of graham cracker and Oreo cookie crumbs. This is baked and then spread with peanut butter. Next, a vanilla cheesecake base, with a swirl of marble chocolate is added and baked. Once cooled, it is covered with chocolate ganache and decorated in tiny peanut butter cups.

Raspberry lemonade cheesecake has a shortbread crust, and a cheesecake base, with homemade raspberry coulee swirled in to give a hint of pink. A lemonade curd is placed on top with raspberry halves. The cake is served with more coulis.

Then, there are vegan and gluten-free options. “We substitute gluten-free cookies for our regular cookies. We don’t add any flour or gluten to our cheesecake base, so the only thing that prevents us from making all of our flavours gluten-free would be some of the flavour ingredients,” he explains. “For vegan cheesecakes, we use a soy-based cream cheese and vegan yogurt. The crusts are made with a vegan cookie crumb and vegan butter. The texture, while different, is almost like a heavy mousse. 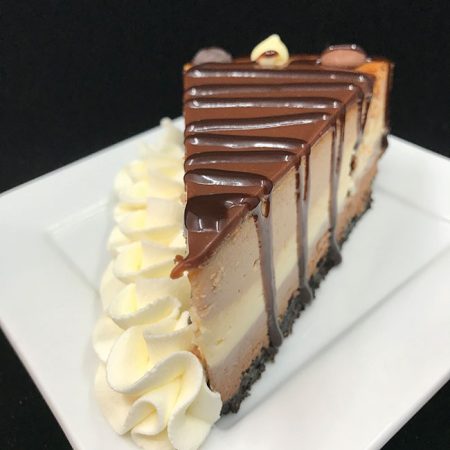 Inn on the Twenty, a small, high-end hotel, in Jordan, Ont., always has cheesecakes on its menu. “The ingredients I use in a basic cheesecake are cream cheese, sugar, eggs, milk and cornstarch. And the crust is graham crumb with butter,” says Clyde Pereira, the pastry chef.

Pereira, along with his team of two pastry cooks oversee preparing the dessert menu for the fine dining restaurant and as well as all the banquets. “I mostly make north American cheesecakes because that’s what people are used to and prefer, but occasionally I do use ricotta. Then, he confides, “The secret to a great cheesecake is the temperature it’s baked at. This is between 275 and 300 Fahrenheit. And a water bath but it needs to be hot water.”

In the spring, key lime lemon cheesecake and honey rhubarb cheesecake are two of the most popular. “For the first, I make my own key lime curd and incorporate it into the cheesecake. Then, I top it with a lemon jelly. For the second, I use local rhubarb, roasted in the oven and drizzle it with honey. Then, I puree it, to use in the cheesecake.”

In the summer, Pereira says berry cheesecake is his favourite to eat and bake. “With the abundance of fruit in the Niagara region, I can’t imagine picking one berry, so I use a mixture of different kinds of berries. I also make a no-bake peaches and cream cheesecake, with butterscotch tuile, red wine caramel, and cinnamon shortbread.”

In the fall Pereira turns to spiced cheesecake, using a mixture of cinnamon, nutmeg, cloves, and allspice, topped with a pumpkin seed brittle. This is served with a side of apple ginger compote.

In winter, he pairs a peanut butter cheesecake, with a strawberry compote. “During this season, I’ll also make a nice boozy Bailey’s cheesecake. In December, I had deconstructed orange cranberry cheesecake on the menu, using blood orange-infused cheesecake, cranberry gel, candied oranges and ginger sable.”

Cheesecake is a safe bet on any menu. It appeals to everyone with its rich flavour. Experimenting with new flavours keeps customers buying more. / BJ