The art and passion of entrepreneurial baker, Chef Greg Wade 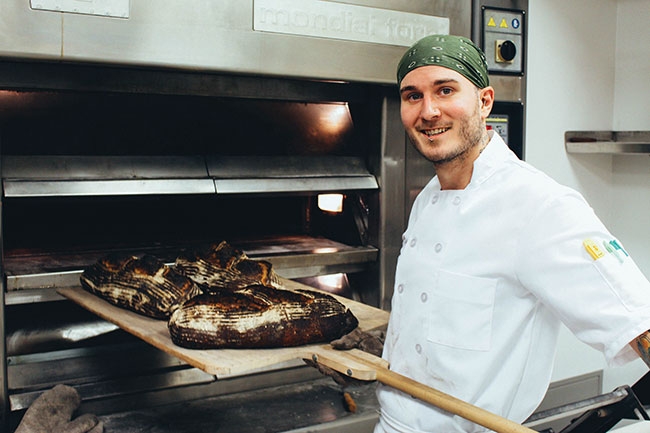 James Beard Foundation Award nominee, Chef Greg Wade of Publican Quality Bread is modest, but pleased with the nod from the American Who’s Who in culinary excellence. “It’s nice to be thought of and recognized as one of the best bakers in the country, and I’m hopeful for next year…it’s just pretty cool. It’s a pretty wild experience,” says the young chef.

Chef Wade attributes his success to how strongly he feels about quality. His driving force is knowing about the source of his ingredients, and being able to provide high-quality bread that is as good, if not better than bread found in Europe. “I think the best thing you can do is to find something that you’re actually interested in, find something that you’re passionate about and that you can do to make money.”

Starting out at the critically acclaimed, Girl and Goat, then later Little Goat, he was introduced to Paul Kahan, of Publican Quality Meats.

Wade remembers the informal interview well. “He asked me, ‘what do you want to do?’ I said, ‘I want to do natural fermentation, and I want to focus on sourdough, and I want to feature local farms, small grains.’ And he said, ‘perfect. Let’s do it.’

“We started off with just doing the one-off location…so it was like seven or eight accounts, and initially we were tied into Publican Quality Meats’ revenue stream, so we weren’t broken out as an entity. Overall, we were able to do many more things. We were able to do naan, and pita and pretzels, and our sourdough and bagels and what have you. It just a product list about forty or fifty items long. It was pretty crazy.”

However, the chef soon learned that the saying, “you can’t please all of the people all of the time” applied to bread baking as in life. Having a wide-range of products looked good on paper, just not on their monthly ledger.

“We were haemorrhaging money. It was really rough on everyone involved.”  The bakery and the partners all took a step back to ask the one question that should have been posed prior to opening: “What do we want to do, and what do we want to do really well?”

“Do I want to be known for the best hamburger bun in Chicago?” asks Wade. “Absolutely not. Do I want to be known for the best sourdough? Yes! So, that’s what we decided to do, we limited our product list to only ten different mixes and re-examined our pricing structure and then we started making money. That’s when we actually grew. Especially at the onset, we weren’t charging the one-off location for full price, it was like half off, or something like that. We decided that in order for the bakery to be successful and be its own thing we needed to charge everybody the same and just pick a small amount of things and do them really, really well.”

The bakery took off after that decision. “I just tallied up our accounts the other day, and we’re just over a hundred. Now we just do over a hundred locations in Chicago, mainly restaurants, and we’re hovering around 12 thousand pounds of dough being produced.”

“Quality” for Wade means keeping his production relatively local. “I don’t think I need to be in every restaurant in Chicago. That’s not the point.” Wade explains. “For me, in five or ten years, I do a retail bakery and café for Publican Quality Bread. But I don’t want to see ten locations of PQB locations. I want to keep it manageable, I want to keep it successful, but I also want to keep it special.”

“I think as you grow, you lose a lot of what you started out with. It takes somebody like myself to be there, consistently, to be able to feel the dough, to be in production and to be able to train, teach and mentor bakers.

“I don’t want to see it become this giant behemoth that I’ve got to run between ten locations and everything is doing “just okay.” I want to do it really well. Just make one or two things and do them extremely well. Just knock ‘em out of the ballpark and have it be something special.”

Wade is optimistic about the quality of bread in the United States, in light of the wider variety of natural flours and grains that are being introduced to commercial baking. “I think that we will see people using better flour, fermenting it, doing more whole grain, that’s where I think bread is going.

“I think we have a very talented group of American bakers these days, that we can try to turn the tide of “Americans don’t have good bread” assumption throughout the world.”