Features Profiles
On the rise 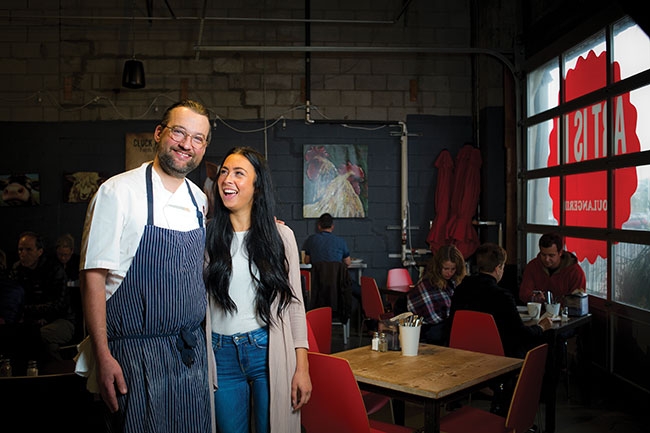 Artisan breads are all the rage. Prefermentation, the process of using bread dough made hours in advance, to add to the final dough, is the new norm. Think biga, poolish, sourdough and levain. Mix in a vast variety of grains and seeds to really ramp up flavour and basic white bread just can’t compete.

Two Canadian bakers Jeffrey Finklestein, owner of Hof Kelsten in Montréal and Kevin Mathieson owner of Art Is In Bakery, in Ottawa have found success through their bread.

Finklestein, at thirty years old, was broke and living with his mother in Montréal. He started to experiment with breads, in their tiny, shared apartment kitchen. This would become the start of his bakery. With years of experience working in both the savoury and sweet sides of restaurant kitchens throughout Europe, Finklestein thought up a savvy business plan. “I saw some of the best restaurants in the world buying their bread,” he says. “I decided I wanted to bake bread for chefs.”

After a decade in business, 60 restaurants in Montréal now buy bread from Hof Kelsten. Initially, Montréalers were only able to enjoy the bread when dining out. Today, there is a retail bakery and café with 19 seats.

Finklestein’s philosophy is simple, “We want you to taste the grains,” he says “Our breads focus on four ingredients; Grain, water, a rising agent and salt.

The end result is a 600 gram round bread. “We like our breads to be dense and compact. The more holes there are in bread, the more it is exposed to oxygen and dries out.”  Dense bread is especially beneficial for his restaurant clients who will not serve it for a few hours after it is delivered. It is then pre-sliced and sits again prior to service.

The signature bread is the Jewish rye. “This is the bread of my childhood, before it became destroyed in today’s market. In this bread, we try to add as much rye as possible, while still keeping it fluffy.” Olive oil, a bit of honey and caraway seeds are also added.

The pumpernickel bread that regular customers love is available only on Fridays. “It’s black. And the colour comes from the slow bake –16 hours in an oven that is turned off over night– and the caramelization of the molasses.” The bread is made from 80 per cent rye flour and contains whole grains and rolled grains. The loaf weighs two kilograms, and because of its high moisture content, it keeps for three days.

Kevin Mathieson, owner of Art Is In Bakery in Ottawa, started his business in 2006. It too, started out as a home-kitchen based business. He quickly needed space, when restaurants in the Byward Market area of the city started enthusiastically purchasing the bread.

A local catering company allowed Mathieson the use of their kitchen during off-hours and the graveyard shift, between 6 pm to 6 am. “I didn’t have any money at all to start a business. But they gave me the space for very low rent.”

Setting up a booth at the local Ottawa Farmers Market at Lansdowne Park set sales soaring. “That’s when things exploded!” exclaims Mathieson. Soon everyone, including the media, was singing his praises.

Today Art Is In Bakery has 14000 square feet of space, with a licensed café. Mathieson’s wife Stephanie takes care of the administrative work, human resources and customer service, while their daughter Emma runs the retail side on things. The menu has been expanded to include breakfast pastries, savory items and desserts. While Mathieson’s bread is still sold to restaurants and appears at local farmers markets, the company has expanded into grocery stores, such as the local Farm Boy chain.

He still sells the two original stiff levain raised breads, the Dynamite White and Whole Grain Fennel, made from a levain of 90 percent organic white flour and 10 per cent organic whole-wheat flour. Creating this bread is a three-day process. But, it’s the latter of the two that is more finicky to make. Mathieson says. “It needs more attention to detail and requires gentle folding and shaping. The bran and germ are very rough. It can puncture the gluten structure.”

Grains play a big part in the breads at Art Is In Bakery. “I’m a big fan of bread with grains. I love to eat it toasted,” enthuses Mathieson.

The Crazy Grain bread starts with a biga.”It’s a stiff dough starter that gives a real strong yeast flavour, with a floral fragrance.”

A pre-mix of crushed grains including wheat, rye, millet, spelt, flax, oats, kamut, cracked corn and  alfalfa, along with the flour, soaked in water and buttermilk, mixed with black strap molasses and left to autolyse—or soak for 30 minutes. This helps to soften and hydrate the grains and slow fermentation, while increasing flavour. “The dough has a lot of moisture, so it’s almost like a pancake batter. It thickens as it sits. Then, we mix it for 20 minutes.”

Additional popular breads at Art Is In Bakery include the Cheddar Chive Jalapeño and the Garlic Rosemary. These breads begin with a poolish of equal parts water and flour. The next day fresh flour is added, along with olive oil, milk, yeast, and salt resulting in a bread of 80 per cent hydration. “We ferment it all day and then process it from there.”

Bread fans continue to rise and artisan breads give customers more choice than ever before. In a market full of unique combinations bread variations can be endless.