Reporting on the sights, sounds and lessons learned in Las Vegas 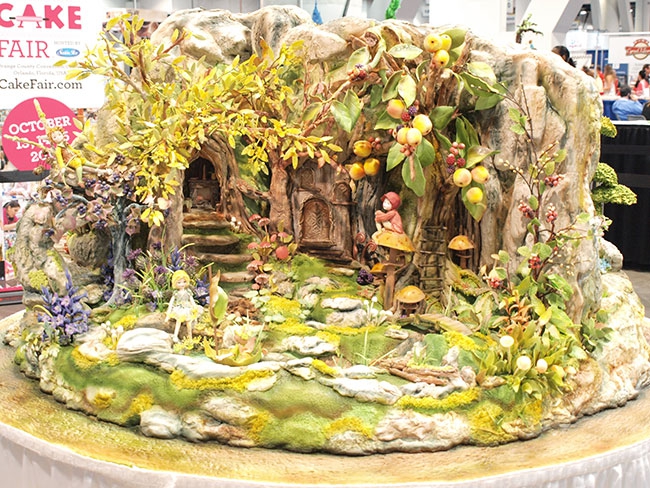 A spectacular cake themed “Once Upon A Time” by Satin Ice Artist of Excellence Mercedes Strachwsky. Photo: Bakers Journal

Held every three years, the International Baking Industry Exposition (IBIE) is the most anticipated industry event in North America, and the 2016 edition was massive in every way. Held October 8-11 at the Las Vegas Convention Center, IBIE 2016 exceeded past shows drawing a larger number of exhibitors and attracting attendees from over 100 countries.

The show company reports that over 23,000 attendees registered for the four-day event, a nine per cent increase over 2013, and a large part of the growth has been attributed to international markets, which accounted for some 30 per cent of the total attendance.

“The quality and depth of IBIE’s attendees, exhibitors and education sessions was incredible,” said Michael Cornelis, chair of IBIE, in a post-show release. “IBIE is continually evolving and growing to meet the needs of baking industry professionals, as well as the trends in the industry, and this year we saw a record-breaking show with the largest show floor, number of exhibitors, innovation showcase and education program in IBIE’s history.”

For a first-time visitor, there was so much to see and experience. Taking in some of the educational seminars proved very enlightening.

Schmansky indicated that 99 per cent of households will purchase bakery items, with seniors and empty nest couples accounting for a growing share. She insists that bakeries need to address the health and wellness needs of these consumers. “Today’s in-store bakery isn’t relevant to the health conscious consumer,” said Schmansky, noting that 95 per cent of items have no health benefits declared on the packaging. She sees that as a missed opportunity and strongly suggests the inclusion of claims like ‘no trans-fats,’ ‘gluten-free,’ ‘no artificial ingredients,’ ‘organic,’ ‘high in protein,’ ‘no sugar added’ and other such facts whenever you can.

She also noted that seniors and empty nesters are looking for convenient grab-and-go options, adding that the deli and prepared food areas (whether dine-in or to-go) is the fastest growing department at grocery stores. She says this is great news for in-store bakery as it opens up opportunities for co-packaging.

Another educational session that was packed and perhaps timely for Canadian visitors was entitled ‘The Future of Wholesale Baking with Marijuana.’ This panel discussion featured the owners of two Colorado bakeries, Peggy Moore of Love’s Oven and Julie Berliner of Sweet Grass Kitchen, who shared their experiences in this growing segment.

Both Moore and Berliner spoke of the high cost of satisfying very strict regulations, from accounting for every ounce of marijuana that enters and exits their facility to 24-hour live streaming surveillance of every square-inch of space, to ever-changing packaging and labeling requirements.

From the baking perspective, Hope Frahm, chef at Love’s Oven, described everyday challenges include dealing with waste product and having to record what is wasted and destroy the product on camera, and have the compost transported by a licensed company.

“There is no spoon licking at the bakery,” she added. Every batch of product gets packaged and sent to a lab for testing. Once approved products are then sent to retailers. The bakery has to purchase products from the retailer before they know how they really taste. “There is no tasting on the job,” explained Frahm, “not only are you stealing from the company, you’re getting high at work.”

Eric Knight, COO of Sweet Grass Kitchen noted that despite what some think, they’re not raking in the cash as of yet. To give some perspective, Moore said that it costs about $8 to create 10 chocolate cookies that they will sell to the retailers for $10. And she says their profits go back into the company to keep up with the changing regulations.

In closing Moore was optimistic about the business. “My hope is to see our part of the industry grow. The stigma is changing towards cannabis. We’re just regular people here, working with something extraordinary.”

We did see some Canadians in the crowd taking notes, no doubt anticipating a potential federal law change in this country in the New Year.

From attending educational sessions to roaming the IBIE show floor, Bakers Journal saw a number of Canadian visitors and spoke with a plenty of Canadian exhibitors. The overall response was very positive, with the attendees seeing new and innovative products, while the exhibitors were all very happy with the level of traffic and quality leads they were gathering.

The common trends of clean label, healthiness and a return to nature were everywhere at IBIE, and following is a sampling of what we saw and heard on the ingredients side of the business.

This was the first IBIE since the formation of Ardent Mills, made up of ConAgra Mills and Horizon Milling—a Cargill-CHS joint venture—back in 2014. Now headquartered in Denver, the company has 42 plants including four in Canada. “We see opportunity for growth in Canada,” said Dan Dye, CEO, in a conversation with Bakers Journal.

Building on the company’s theme of “nourishing what’s next,” Ardent Mills is thinking of grain differently, said Dye. The company’s booth consisted of its Mobile Innovation Center, where it was showcasing its new Simply Milled line of clean label flours with no bleach, bromate or other additives. It was also promoting ancient grains and heirloom wheat along with sprouted wheat blends.

The sampling menu at the booth included themes of “grains with a story,” “mainstreaming nutrition” and “enlightened eating.” We sampled a blueberry ancient grain cookie with purple barley, quinoa and millet.

Purple grains popped up in number of locations, including purple wheat at the Abel & Schafer stand.

It didn’t take much searching to find Canadian-based ingredient exhibitors at IBIE. La Meunerie Milanaise, the Quebec mill that specializes in organic flours, flakes and grains, was exhibiting its products. Emilie Arbour, marketing coordinator with Milanaise, noted the company’s new mill in St-Jean-sur-Richelieu is up and running and it has laboratories and a bakery on site to test the functionality of its organic products.

Also highlighting its organic flours was NutraSun Foods based in Regina. General manager Kerry Keating said the company was getting good traffic at the show with interest from American bakers.

Ontario’s Everspring Farms was sharing the story of its sprouted grains and seeds. Dianne Donaldson, vice president of product development was enthusiastic about the number of visitors at the show.

Every day towards the end of the show Montreal-based Lallemand hosted a bread and wine tasting allowing visitors to taste bread baked with aromatics yeast (special strains of wine and beer yeasts selected for use in baking products), paired with a selection of wines produced with Lallemand wine yeasts. The company was also rolling out its FlexFerm bakers yeast and its vitamin D fortified yeast.

The post-show feedback from Peter Jacobs, eastern Canadian sales manager with Lessafre Yeast, was extremely positive, noting that many Canadian customers made the trip to Las Vegas. Lessafre was highlighting its Red Star fresh organic yeast for North America.

And for attendees who visited the AB Mauri booth, the company emphasized its technology-driven approach by taking visitors on a virtual reality baking trip through past, present and future. According to Rick Oleshak, vice president marketing, nearly 1,500 people enjoyed the VR experience. The company also took advantage of the event to kick off celebrations for the upcoming 150th anniversary of its Fleischmann’s Yeast brand (the actual birthday is 2018).

DuPont Nutrition & Health highlighted its portfolio of Danisco baking ingredients, focusing on clean label and longer shelf life. Maria Brandt, global product manager food enzymes with DuPont, shared how the company’s selection of enzymes contribute to the stability of production for industrial bakeries. She also noted the need for partnerships because enzymes react differently with different flours, and that wheat flours within a country vary from region to region, and even year to year.

A spectacular cake themed “Once Upon A Time” by Satin Ice Artist of Excellence Mercedes Strachwsky.

Dawn Food’s was inviting attendees to support the National Donut Party, offering samples of specialty donut flavours like cherry and orange juice. The booth highlighted eight key consumer trends the company has identified like Mashup Mania (repurposing products like using a donut as a burger bun) or The Best of Both Worlds (combining healthiness with indulgence), and every corner of the Dawn stand demonstrated applications of the trends in use.

On the topic of flavours, the team at Embassy Flavours from Brampton, Ont., were featuring colourful flavoured donut sugar. The challenge, noted QA manager, Tina Chang, is creating the brilliant colour to match the flavour.

Cargill introduced its Regal line of bakery shortenings including a nonhydrogenated icing shortening.

On the hardware side of the show floor, incorporating new technology into the baking equipment was evident. American Pan was featuring its SMART Pan Tracking system, whereby individual pans are laser marked enabling companies to monitor baking cycles and alert them when re-coating may be required.

Kaak Bakeware was also showing its iBakeware system, which likewise allows the tracking and monitoring of pans.

Automating steps in the artisan bread baking process featured highly. Mecatherm was highlighting its new FTA modular single deck tunnel oven that can be adapted to bake a wide variety of products. While visiting the booth we witnessed an artisan baguette baking demo.

At the Revent booth, demonstrations on the company’s ONE rounded ovens showed baking variety in a small space. The company was also promoting its new artisan test bakery opening in January 2017 in New Jersey.

Rheon was demonstrating an artisanal bread dough forming line which incorporated its two lane punch rounder. The machine was outputting boules at speeds up to 50 pieces per minute.

A high-speed dough divider on Reiser’s booth was showing a multi-lane divider with air chillers designed to keep the dough firm and non-stick without having to dust with flour.

Among the many products on the Cinelli Esperia stand was a new Ciabatta machine capable of producing some 7,000 pieces per hour.

Unifiller was showing a series of new depositors and extruders for fast and accurate production along with the launch of its iPump for small operations.

On the safety front, Toronto-based Fortress Technology was featuring its Interceptor metal detector that runs at two frequencies, stainless and ferrous.

There was no shortage of new sights, smells and tastes to experience at IBIE 2016. Along with the ingredients and technology, there were also cake decorating contests and regular sightings of Buddy Valastro, The Cake Boss.