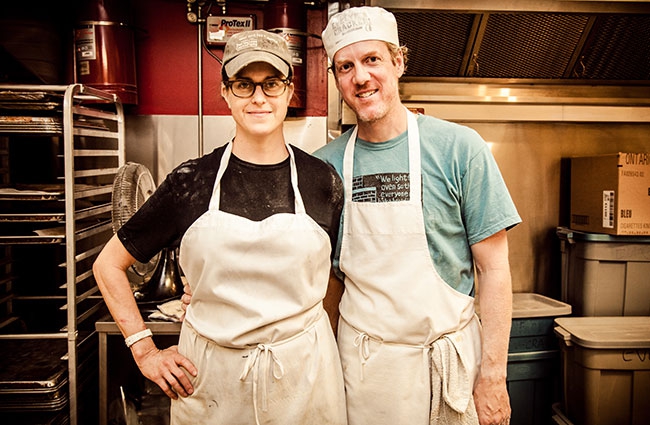 Tune into the chatter of bakers on social media and one thing becomes clear; whole-grain baking is hot. In her book Flavor Flours, celebrated baker Alice Medrich is using sorghum and teff, and Dan Lepard is encouraging his weekly Guardian readers to mill their own flour from whole grains. It appears that one of the happy outcomes of the search for wheat substitutes is the discovery of new flavour frontiers in baking.

It’s not a new trend for Dawn Woodward and Edmund Rek of Evelyn’s Crackers in Toronto who’ve been baking with whole grains since they started in 2008. Not just any whole grains either, they only use organic grains grown and milled in Ontario. It’s no small feat given that many who claim to be making whole grain products are adding as little as 20 per cent to a mainly white flour mix. At their production facility, white flour is nowhere to be found. They want customers to see flour as more than a “dirt-cheap commodity,” says Woodward.

For Rek and Woodward, Evelyn’s forms one part of an agricultural trinity that includes the farmer, the miller and the baker. A core business value of the duo from the start was their commitment to “saving heritage grains.” They want to work with farmers in the small non-commodity system. In her keynote address at this year’s Grain Gathering conference at Washington State University (WSU), Woodward says the hardest part of the job is “explaining to our customers that we are part of the slow, local, sustainable food movement that focuses on using local whole grains to rebuild regional grain economies.”

One of Evelyn’s Crackers’ staple flours is Red Fife, a darling of Canadian artisanal bakers. It’s a wheat varietal that thrives in our climate and takes its name from the seeds’ red colour and from David Fife, the first Ontario farmer to grow it in the mid 19th century. You can taste the wheat’s nutty, sweet, flavour in Evelyn’s Oatcake Biscuits. They also bake with spelt, club wheat for pastry, rye, buckwheat (technically a grass), cornmeal and barley.

They work with Ontario millers who can provide 100 per cent whole grain extraction. “How could I ask the miller to discard most of what gives the grain its unique flavour?” asks Woodward. They’re also sticklers for freshness, wanting the flour “milled and brought to our door within two or three weeks.”

From the start, access to whole grain flour has been easy; it’s convincing consumers to make the leap to 100 per cent whole grain that’s hard. Tasting is key to conversion and a core tenant of their business strategy. Woodward and Rek can be found year-round working at two of Toronto’s largest Saturday morning farmers’ markets, The Brickworks and Wychwood Barns. Customers can talk with them and sample their products. “We’ve built incredible connections,” says Woodward, because the flavour is a revelation and people like their values.

The couple first opened for business in 2008, naming the company after their daughter Evelyn. They began with a couple of nut-based crackers but had to drop those because of allergies and expense. A few of their most popular crackers, which were developed soon after, include: Spicy Dal, made with spelt flour, Indian spices and lentils; the buttery and flaky Cheddar Crispies; and Slightly Seedy Crackers. All the ingredients are organic, except for the butter, which is Stirling Creamery’s Churn 84.

They thought the business would scale up pretty quickly, but the reality has been more of a slow and steady growth. Each dough is different, and production is labour intensive, says Woodward. “We hand cut, hand shape and scale by hand using minimal equipment.” To mechanize the process, they would have to limit production to a few of their most popular crackers.

They bake fresh to order without preservatives and hand package, making the crackers more perishable, with a three-month shelf life.

Business today is split evenly between markets and wholesale. “We sell at six farmers’ markets in the summer and two in the winter, and we also wholesale the crackers to about 50 stores across Canada,” says Rek. Their best wholesale accounts are with businesses that are small- and medium-size businesses, similar in scale to their own.

The demand for high-end crackers is slim. They compete for shelf space in specialty stores with crackers that don’t taste like much but have pretty packaging.

Seasonal staffing is one of their big business challenges, as is finding experienced bakers. Most production difficulties have led to innovation. When faced with a shortage of Ontario Red Fife wheat they began focusing on non-wheat for their baking. In 2013 Woodward began to experiment with whole grain sweets. She eased into it with granola bars, chocolate chip cookies and fruit tarts, and she discovered a hungry audience.

One of the dilemmas of whole grain baking is the mostly earth-tone colour of their baked goods. “We’re always searching for a different shade of brown,” Woodward laughs.

Both are occasional teachers. Rek is a chef by trade and spends time in the winter months teaching cooking at George Brown College chef school in Toronto, while Woodward travels twice a year to teach at The Bread Lab at WSU. Some of her inspiration comes from spending time with fellow baking geeks.

In 2015 she taught whole-grain baking classes at Grist & Toll, an urban flourmill in Pasadena, Calif. A pastry chef attending one of her classes told her about a cookie she baked with miso and white chocolate. When Woodward returned to Toronto she began tinkering with this idea, creating whole grain shortbread with yellow miso and dark chocolate. She describes the flavour as “savoury with just the right amount of sweetness from the chocolate.”

On that trip she also discovered a wheat varietal named Senora that makes a fine, soft, butter-yellow flour with a distinct wheat flavour. She used it to make the tender French teacake, madeleines. When the flour has great flavour, says Woodward, “you’re not just tasting butter and sugar” in the baking.

They connect to their community by regularly posting photos of the crackers and sweets on Evelyn’s Crackers Instagram feed. There’s a picture of a “Corn Cookie” inspired by the Italian Zaletti cookie and the famous corn cookie from Momofuku. There also are seasonal offerings like the high summer treat, Buckwheat Shortbread with Roasted Peaches. Dawn keeps the baking simple and often shares the recipe in the comments to encourage people to try whole grain baking at home.

Woodward wonders how much longer they can work at this pace. This year they’ve made an effort to make more time for their daughter Evelyn, and they’re looking at ways to streamline the business. They would love to have a small retail space in downtown Toronto, and right now they don’t wholesale the sweets, but they are selling cookie dough and muffin batter to cafes and small stores to bake in-house. Some of their customers would like them to bake bread, but that requires an investment in a new oven, so not yet.

What they know about wheat would put most bakers to shame. They’ve recently been approached by a group of farmers in the Fort Erie area who are running trials growing heritage grains including two ancient wheat varietals, Einkorn and Emmer. Woodward has been baking Wild Blueberry Madeleines with Einkorn and loves the flavour. Farmers can make more money growing heritage grains, but they need access to the urban market to survive. It’s early days for this group, but there’s talk of a flour mill, and that excites them both.

The time and attention Woodward and Rek give to the cornerstone ingredient of their baking is admirable. Their interest and enthusiasm for wheat and flour has not waned in eight years of steady business growth. Their commitment to Ontario agriculture has not gone unnoticed. In 2013 Evelyn’s Crackers won the Premier’s Award for Agri-Food Innovation Excellence. They’re proud of that distinction because it reinforces the close ties between the bakery and farmers.

Participating in that community and expanding the market for Ontario-grown wheat is a central business mission. Helping farmers and millers to succeed is as important as creating a new cracker, sweet, or finding a new customer. The happy outcome is that more variety and more flavours are on the horizon.

Deborah Reid is a Toronto-based chef, writer and culinary consultant.