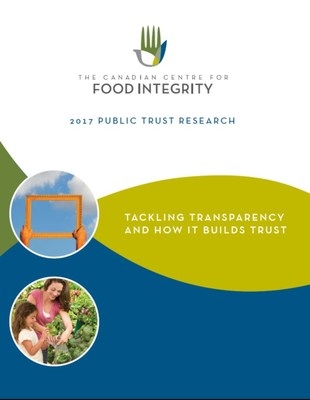 Calgary — New research points to an increasingly positive attitude in Canadians when it comes to trusting their food supply. The research was released this week by the Canadian Centre for Food Integrity (CCFI), which studied consumer concerns and expectations surrounding food transparency and the overall food system. Canadians feel the food system is headed in the right direction, suggested by an increase from 30 per cent in 2016 to 43 per cent of Canadians this year.

While consumer confidence is increasing, an equal number of Canadians (43 per cent) say they aren’t sure if the food system is on the right track, down from 50 per cent in 2016. These findings are significantly different than the American consumers’ findings from 2016, which showed more definitive opinions with 55 per cent choosing right direction and only 23 per cent saying they were unsure.

The 2017 CCFI Public Trust Research occurred in-the-field in June, asking 1307 Canadians about top life concerns, specifically their level of concern, trust and transparency expectations related to food and how it’s grown. Those polled clearly identified food companies to be the most responsible for providing information about food and how it’s grown.  Other food system partners including farmers, government, restaurants and grocery stores also ranked highly as being responsible for transparency.

“Canadians are looking for credible information to make informed decisions about their food,” stated Crystal Mackay, president, CCFI in a news release. “This research reinforces that everyone in the Canadian food system, from the farm through to grocery stores and restaurants, should engage in conversations about food.”

Those polled are personally concerned and want more information about specific topics, including food safety, environment and farm animal treatment. Consumers are looking for information on food company websites such as third party audits, track record, practices and policies that demonstrate their values. When studying these elements of transparency, accuracy rose to the top as the most important attribute to Canadians.

Many Canadians are unsure about their food or how it’s grown, but want to learn more. Canadians ranked the rising cost of food and keeping healthy food affordable as their top two life concerns above rising energy costs, healthcare and the economy for the second year in a row.

These findings and other insights were key areas for discussion when leaders from across the entire Canadian food system met at the CCFI Public Trust Summit in Calgary this week. Find out more by reading the full 2017 CCFI Public Trust Research report on www.foodintegrity.ca.