Plant-based baking on the rise in Canada 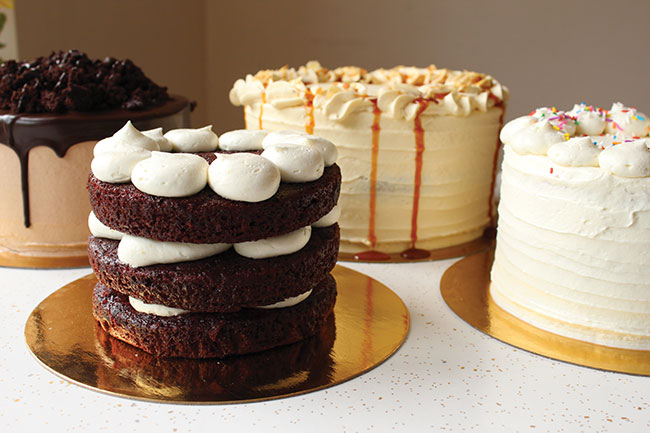 The vegetarian and vegan population in Canada continues to grow. A study conducted by Dalhouise University in 2018, concluded that 10 per cent, or 2.3 million consumers said they were vegetarian. The figures were up from the 900 000 reported 15 years prior. Additionally, 850,000 people said they were vegan. The study also reported most of this group, were under the age of 35. British Columbia leads the way in animal free eating movement.

British Columbia is not the only province in Canada, with successful vegan bakeries. In Montreal, Quebec, a city known for its classically delicious pastries based on butter, cream, and eggs, one bakery stands out for maintaining the taste, while eliminating all animal products.

“I was a baker of made-to-order cakes before I went vegan. Then, once I became vegan, I realized my baking practices were not in line with my beliefs,” says Laoun, an advocate of animal rights. She notes that there are many reasons someone may choose to become vegan, such as environmental concerns, personal health, religion, or economic reasons.

“I wanted to show people that vegan can be delicious.” Then, she adds, “I don’t limit my products to the vegan market. Many customers just wander in and buy something from the showcase. Later, they are surprised to learn how the products are made.”

Eliminating butter, cream and eggs and finding a replacement for each, varies from product to product. “We work by finding the propose of the item in the original recipe,” says Laoun. “For example, if the eggs in a recipe are used to bind a cake, then flax seed can replace eggs. If the eggs are used for leavening, then a combination of starches and baking soda can be added. And, for whipping without using egg white, aqua fava or the soaking liquid from chickpeas can be used.”

For chocolate ganache, coconut milk replaces cream. For whipped cream, soy milk and coconut oil will do the trick.

For butter, Laoun says, “we don’t replace it with unhealthy fats like shortening or margarine. Instead, we use a homemade butter we make from coconut oil and soy.”

One of the most popular items at Sophie Sucrée is the feta puff pastry. They make their own almond-based feta using almonds, lemon juice, olive oil and salt. It is then blended with a high-speed blender into a thick cream.

A source of pride at the bakery is the croissants. “It is hard finding a good vegan croissant,” admits Laoun. “It is quite rare.” Croissants are made with wheat flour, coconut oil, soy milk, sunflower oil, sugar, yeast, sea salt, organic apple cider vinegar, soya lecithin, xanthan gum, and agave syrup.

Then, there are cakes. Unbaked cherry cheesecakes are the pride of the showcase. Made with a cashew and oil-based, these cakes are topped with a cherry gel and are available in 6-inch cakes, or by the slice.

Classic sponge cakes in vanilla, with vanilla icing and sprinkles or chocolate with chocolate icing top with chocolate ganache glaze fly out of the showcase. “The Red Velvet cake are iced with a cream cheese-flavoured icing. We make the flavour naturally, in house, with apple cider and nutritional yeast. It is our most controversial flavour. 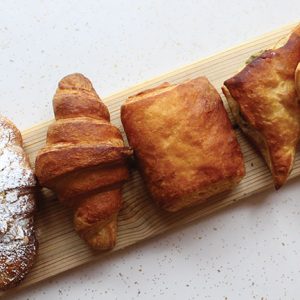 Laminated pastry, such as croissants and chocolatines (above) present a challenge to the vegan baker who use alternatives to dairy. 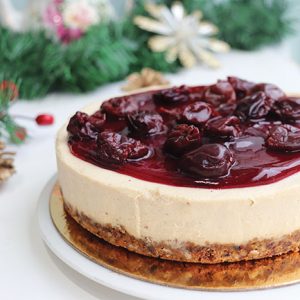 The Unbaked Cherry Cheesecakes are made with cashew nuts and are the pride of Sophie Sucrées showcase.

It’s our most popular cake and those who love it, love it a lot,” says Laoun “However some people are not accustomed to the flavours of the cream cheese icing and are very divided in how they feel about it.”

Laoun is thrilled with her decision in opening her business. “I love to see how much interest there is in vegan desserts. Serving customers decadent and satisfying vegan treats brings us closer to our goal and hopefully opens minds and sparks conversations.

Laura Incognito, owner at Little Tucker, in Calgary, Alberta, a company that makes vegan bakery snacks for her online shop and over 1000 retailers across the country, explains how she keeps her products free of animal- based ingredients. “Our recipes are raw – meaning there is no baking or cooking involved. To bind our ingredients together, without the use of traditional binders such as eggs, we use wet ingredients, such as date paste and nut butters, which allow everything to stick together. We also do not use any dairy products.”

Her snacks are high in protein, which is important in a vegan diet. “We use a blend of whole foods that are naturally high in protein such as nuts, nut butter, hemp seeds and chia seeds,” she says.

When asked what the top selling products is at Little Tucker, Incognito says, “Our Snickaroo Bites, which are a feel-good version of a traditional chocolate bar. These bites are made from nut butter and data caramel and are wrapped in house made chocolate and crunchy peanuts.” She explains that customers love these because it allows them to indulge in something that tastes like the chocolate bars they grew up with, but made entirely from natural, plant-based ingredients. “It’s the perfect bite to satisfy your sweet tooth,” she says.

As for the second most popular product, Incognito says it is the Salted Caramel Energy Bar. “It gets its sweet caramel taste from a superfood fruit called Lucuma, grown in South America. This energy ball is great for people wanting to avoid crazy sugar spikes.” It’s made from a blend of dates, lucuma, pink Himalayan sea salt, almond butter, vanilla, cinnamon and coconut, giving it a perfectly smooth flavour. “It’s the yummiest snack for when you’re craving something functional.”

Now, that veganism has entered the mainstream, more general bakeries are adding vegan options for their customers to select from. Savvy bakers and pastry chefs should not miss the opportunity to craft new vegan bakery good, while attracting a larger marketplace.

Bakers Journal learned that according to Statistics Canada, people aged 65 or older “and recent immigrants were “less likely to choose products for ethical reasons, compated with 30 per cent of hose aged 45 to 54.” Bakers who have an older clientele may want to market their plant-based goods based on flavour or its purported support for healthier lifestyles.