November 15, 2017
By By Gianluca Donzelli and Stefano Manfredi Pizzaperta Manfredi

November 15, 2017By By Gianluca Donzelli and Stefano Manfredi Pizzaperta Manfredi 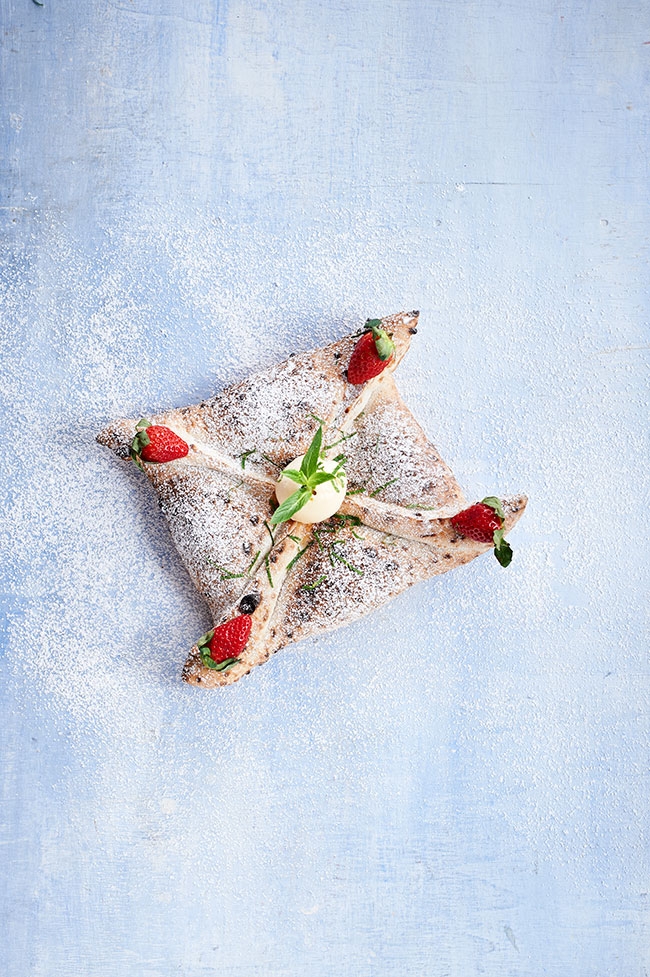 Pizza New: A whole new era for the world’s favourite food, by chef Stefano Manfredi, looks at what happens when pizza is made using different stone-milled flours, various fermentation procedures and free of the strictures of tradition. It includes recipes for pizza rossa, pizza bianca, Roman pizza, and filled, fried and sweet pizzas such as the delicate dessert recipe below, “Pillow of dreams.”

“Italians love their Nutella,” writes Manfredi, who owns and operates Restaurant Manfredi and bel mondo and Pizzaperta Manfredi in Sydney, Australia. He provides a history of the chocolate treat: “Nutella is now famous throughout the world, but its origins begin with Italian pastry maker, Pietro Ferrero, who created a chocolate bar cut with high-quality Piemontese hazelnut paste. That was in 1946 when chocolate was in short supply post-war. It became an instant success. Many loved having bread and chocolate for breakfast, so in 1951 a version with a creamy, spreadable consistency was invented called Supercrema. It was Pietro’s son Michele who rebranded it as Nutella in 1963 and it is now enjoyed by millions of people all over the world.”

“This is Pizzaperta’s version of a Nutella pizza. When our chef, Gianluca Donzelli, created it he said it was ‘like a dream.’

METHOD
To assemble: Place a large tile in your oven for the pizza, then preheat to full heat (without using any fan-forced function) for at least 20 minutes. Cut the pizza base into as large a square as possible. Place a tablespoon of Nutella halfway between each corner and the middle of the square. Scatter the flaked almonds on top of each tablespoon of Nutella. Fold each of the corners of the dough into the centre over the filling, forming a smaller square, and seal by pinching the edges gently where the folds meet. Place the pizza in the oven for 3-5 minutes until cooked, turning to get an even colour. Once cooked, remove from the oven and place on a board. Sprinkle with a light dusting of icing sugar. Place on a serving plate. Add a scoop of vanilla gelato in the middle, a strawberry half in each corner and scatter the sliced mint on top. Finish with a mint sprig on the gelato.
Yield: Serves 4.

Basic pizza dough
For our recipes we extend the maturation phase of the dough in the refrigerator so the final cooked pizza is easily digested and the flavour of the wheat maximized. Using an unrefined, stoneground whole-wheat (not wholemeal) flour is important because of its rich nutrients and the fact that it means less yeast is needed for fermentation and the maturation phase is thus more effectiThis recipe is for making pizza using fresh or compressed yeast. Each 250 g (9 oz.) ball of dough will make one 30 cm (12 in.) pizza, which feeds one person.

METHOD
Place the flour and 500 ml (17 fl oz./2 cups) of the water in a mixer fitted with a dough hook attachment. Begin mixing on a low speed and keep mixing until the flour has absorbed all the water but is still not smooth. This should take only 3-4 minutes. Stop the mixer and let the dough rest in the bowl for 15-20 minutes.
Meanwhile, dissolve the yeast in the remaining water. Once the dough has rested, turn the mixer on to medium and add the dissolved yeast. Two minutes later, add the salt, mix for 2 minutes and then add the olive oil. Keep mixing until the dough is shiny and homogenous, about 6 minutes. Turn the speed up a little and mix for 2 minutes more. Stretch a piece of dough and if it forms a strong, transparent membrane without breaking, it is ready. Let the dough sit, covered with plastic wrap, for 30 minutes in winter or 15 minutes in summer. The dough is now ready to be shaped into balls and then rested further in the refrigerator before shaping into discs (see pages 80–83).
Makes 6 pizzas (250 g/9 oz. each).