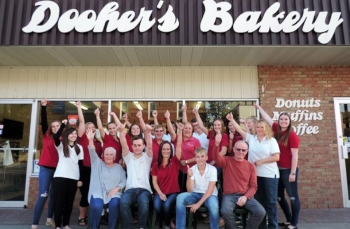 The 2019 Jake the Baker award, given to a North American bakery that demonstrates charity or community involvement was awarded on May 5, 2019 at the Montreal Palais de Congrès.

Congratulations to Dooher’s Bakery, who was unable to attend the announcement in person. They were in the process of being celebrated by their town of Campbellford, Ontario for winning ‘Canada’s Sweetest Bakery’ award. Dooher’s has been running for three generations since 1949. The shop will celebrate it’s 70th anniversary this summer.

In typical Dooher’s fashion, they chose to celebrate their giving spirit by throwing a party for their town, with complimentary BBQ, music and various forms of family-friendly entertainment. Cory Dooher, the co-owner of the bakery was informed of her Jake the Baker win the same week she learned of winning the Canada’s Sweetest Bakery humanitarian award.

The Jake the Baker award would not be possible without the support of the founding sponsor, Ardent Mills and the gold sponsor, IREKS.

Dooher’s Bakery contributed to food banks, and raised funds for their local hospital by organizing benefit dinners that raised thousands of dollars towards equipment. Read more about Dooher’s giving in the July Issue of Bakers Journal. Congratulations, Dooher’s Bakery!