Features Business and Operations Staffing
Wading in the talent pool

Staffing shortfalls and what you can do about them 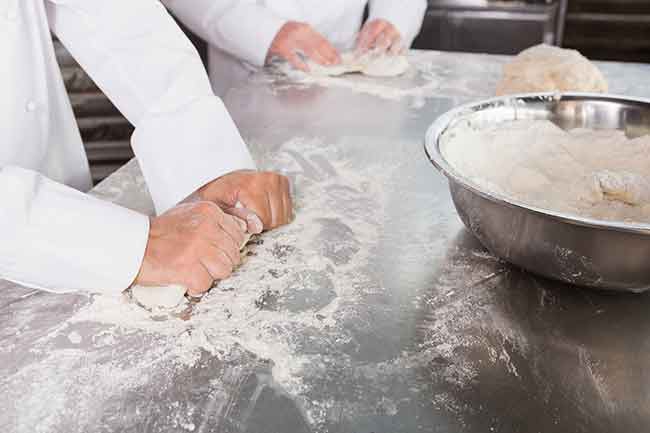 Having enough hands on deck is half the battle to growing a bakery business in today’s tight labour market, where the right skills are in high demand. Photo: Fotolia

We would love the luxury of production while fully staffed,” says Chudleighs’ vice-president of human resources Brent Winterton. The frozen dessert company operates in Milton, Ont., in a 125,000-square-foot plant, with 150 employees working two production shifts Monday to Friday.

Winterton’s recently placed six people, three of them in newly created positions, in the last six months. Nine vacancies remain, an example of the labour shortages in food manufacturing. Companies are looking predominantly for skilled workers, and shortages are threatening expansion plans and business growth in general. Where there’s a promise of growth, companies are managing with fewer workers than they really need.

“We’re growing in all areas, organically and through new business,” Winterton says, “and the talent we’re looking for is craftsmanship level, blending and baking, and some executive positions.”

The value of proper staffing has the potential to impact a business in obvious and surprising ways. Says Winterton: “Even with just the recent hires, the company’s benefited from efficiencies we haven’t seen before.

“There’s a real challenge to bring in talent quickly,” Winterton says, “but it’s vital to stick to our strategic plan, which has been laid out far in advance.” He recruits through local marketing, the company website, Internet recruiters and traditional recruiters for senior positions like engineer and food safety director.

The competition for skilled workers is stiff. “Food safety skills are among the highest in demand,” says Jennefer Griffith, executive director of the Food Processing Human Resources Council (FPHRC). For example, a Moncton business owner has been advertising for a quality assurance manager for over 18 months, unsuccessfully. “Food safety technicians are always in demand and they get snapped up very quickly,” Griffith says.

Labour shortage stats are compelling. Manpower Group is a global human resources firm whose most recent Talent Survey was released in May 2015. The company surveyed nearly 42,000 hiring managers in 42 countries during the first quarter of 2015. They found that 32 per cent of Canadian employers are having difficulty filling positions. Canada is tied with the U.S. Japan is in the toughest spot, at 83 per cent, and the luckiest employers reside in Ireland, with only 18 per cent of employers struggling with their staffing. “Skilled trades workers” — which include chefs and bakers — is Manpower’s labour category most in need of skilled staff.

For bakeries with cafés and those offering catering, it’s worth noting some findings presented by Liaison College, an Ontario culinary school franchise. Pulling from Statistics Canada and the Canadian Tourism Human Resource Council, 79 per cent of restaurant operators are short on cooks (which includes pastry workers); 54 per cent need food and beverage servers, and 51 per cent need foodservice attendants and kitchen helpers.

Two years ago, the FPHRC produced some reports to study the food processing sector, including its labour needs. The organization turned its reports into stepping-off points for a national human resources strategy that addresses all aspects of skills challenges, from codifying competencies, to training and accreditation, to staffing from abroad by prevetting and training approved permanent residents while still in their home country, to training specifically for retention and professional development.

One program stands out for innovative thinking, efficiency and vision. The Pre-Arrival Food Safety Management Training Program, with funding from Citizenship and Immigration Canada, recruits future Canadian workers, helps them to get permanent residency status while still in their home countries, trains them in food safety and gives them Canadianized training that will prepare them for work in food processing. The program also partners with pre-arrival agencies like the Canadian Immigration Integration Program and Canadian Orientation Abroad, which are now merged into Planning for Canada.

Dispatched from a UK office, there are 35 orientation officers currently prepping foreign workers in hundreds of countries. “Our target, when we officially launch in April 2016, is to place 850 workers in Canada,” Griffith says.

The national program is unique in the world, says Griffith, who credits community programs in British Columbia and Ontario for paving the way by conducting similar programs locally and for proving the potential for success.

Career Focus is a program that’s also part of the FPHRC’s national human resources strategy, operating since 2009. In 2015, it had $1.2 million in grant money for companies to match dollar-for-dollar, to hire unemployed or underemployed post-secondary graduates 30 and under. The grant ceiling provides a $20,000 savings per worker to participating employers who will train and provide experience, with retention and career progression in mind.

In 2015, Career Focus placed Tegan Rieger at the Harlan Bakeries in Edmonton to train as a quality assurance technician. Through her placement, she was able to expand her skill set by reviewing and updating training programs, providing training, adapting to different learning styles, conducting policy reviews and revising procedures. Building on extant skills in product development, she assisted in creating formulas, running trials, using her sensory science knowledge for product formulation and in testing. Says Harlan plant manager Crystal Braman: “The addition of Tegan’s position has given us the ability to enhance our quality programs and created another set of eyes to ensure we are producing a safe, quality product for our customers.”

Not all employers are so lucky. In Vancouver, Eleanor Chow Waterfall was struggling with retaining staff. “We’ve had three staff in the past two months that were trained and then decided to leave,” she says. As well, a Career Focus worker placed last year left after five months. Waterfall owns Cadeaux Bakery, which has a café attached, with eight employees in back and three up front. She does her recruiting on Craigslist because it has the Vancouver Community College’s Alumni page, which includes the baking and pastry program. She also posts on the Pacific Institute of Culinary Arts website, places help wanted ads in Scout magazine and in Foodee Magazine online. She’s starting to get requests for wholesale products, which could mean significant expansion for her business, but she can’t fill the orders. She’ll have to wait to apply to Career Focus again this year hoping that someone with the relevant skills is available.

However, she did get lucky with an outlier individual. “He came to do his practicum from the pastry program at VCC,” Waterfall says. “He was very shy and kept his head down, but worked hard. Then he left to work at a bakery to focus on bread. Then he went to New York City to work at a high-end pastry shop, and when he came back, he was ready to commit, and he’s been working here ever since.”

Mary Bradshaw and Bernadette Erb have been running A Couple of Squares in London, Ont., for over 18 years. Their 9,000 square foot operation is staffed with 20 full-timers, with another 10 seasonal workers to be added in July. For the seasonal work, there will be two return workers. Eight will have to be recruited from scratch.

The bakery finds employees through ads in the local paper and through word of mouth. This year, the company is using Career Focus for specific tech and communications skills to help launch a new e-commerce venture that they hope will facilitate an expansion to add retail to their wholesale operation. “We’ve been thinking about it for a couple of years,” says Bradshaw, “but only started taking action in the last two months.”

Among the barriers to recruitment, the FPHRC Labour Market Report notes, are competition within and outside the sector, lower wages relative to other industries, the public perception that the food industry doesn’t have long-term career potential, and that working conditions include shift work in often cold and damp environments. The report also identified a lack of awareness at the high school and post-secondary levels about the industry generally and the career possibilities specifically. The report found that only 44 per cent of firms surveyed said that they use incentive programs for their recruitment.

The report recommends that employers be innovative in their retention programs, offering off-site and in-house workshops, seminars and conferences, and to connect directly and personally with employees.

Chudleighs invests heavily in retention programs that are training-based and “address the whole individual,” Winterton says, which includes general, personal and professional programs. An annual staff survey shows that employees want constant development and progressive training so that they can contribute to the company.

Looking ahead to coming demographic shifts in the pool of prospective workers, Winterton says, “Younger workers, in particular, are very important to have in the mix. Our current demographic is 40 plus. We’re not seeing Millennials. This is going to be a huge issue and to make this work attractive, we’ve got to ante up to make them want to be here. We want to be an employer of choice.”

Stephanie Ortenzi is a Toronto writer and

Related
Quality of job candidates slipping: Canadian small businesses
Making it Work: What some of Canada’s top rated employers are doing to keep their employees happy.
Editor’s Letter: May 2016
Making it Work
Tags