Has wheat really changed in the last 150 years? This is the question I set out to answer. Read on to find out what I learned. 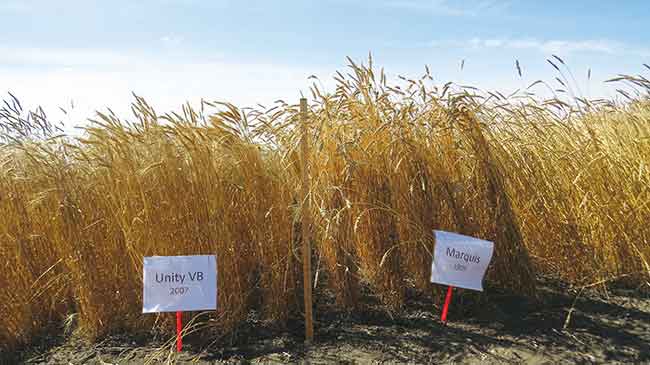 Wheat is the most widely grown cereal grain, making it a staple food for 35 per cent of the world’s population, and provides more calories and protein in the world’s diet than any other crop, according to the International Development Research Centre. As a key ingredient for the food industry, bakers likely understand this reliance more than anyone else, because many work with wheat flour every day.

Recently, however, wheat has come under scrutiny with claims that agricultural breeding practices have changed it in some way. According to these claims, wheat is now less healthy than it once was, accounting for the rise of health issues including diabetes, obesity and other lifestyle-related conditions. While there has not been any peer-reviewed scientific research to show support for these unmeasured claims, the idea that wheat has changed is something we can measure.

That’s why in 2013, Dr. Pierre Hucl and I led a team of researchers at the University of Saskatchewan to investigate the nutritional composition of modern wheat, and whether that composition has changed over the past 150 years. We grew several historical varieties of wheat, harvested it and compared the decades of grain to determine whether or not that claim is true.

What we discovered was that since 1860, the composition of wheat grain has actually changed very little.

The major variety of wheat grown in Canada is Canadian Western Red Spring (CWRS) wheat, a grain that grows especially well in our prairies and is renowned for its use as an all-purpose flour or in the production of breads. As it is the bulk of wheat production in the country, it was the variety chosen as the best example of a “modern” grain. Our first step was to determine how we would measure change, and we focused on the concentration of starch and protein, two major components in a wheat grain.

From there, we conducted trials with actual seeds saved from the 1860s onwards, planting them in similar conditions over two growing seasons (years) and harvesting the grains from the plants. These included 37 different varieties, all of which were then examined and measured in exactly the same way as our CWRS example.

What we found was that while there was an increase in total grain protein concentration, that increase was less than one per cent. When we analyzed the starches in the same way, we determined that the wheat grown today has a very similar nutritional composition to every variety we tested, including the varieties that date back more than 150 years.

This lends very little support to the idea that the nutritional quality of wheat is in any way responsible for health conditions that have become more prevalent in today’s society, including obesity and diabetes.

Like much of the food we eat, wheat has improved over the years to produce plants that have greater yield and can withstand various climate and soil conditions, all focused on helping to feed the world’s population. Even with all of these improvements in the breeding of wheat, however, this data shows that grain composition has remained very similar since 1860.

For bakery production, everything begins with consistent, quality ingredients. Ensuring quality at the very beginning means ensuring quality for the end result. And we can be proud to know that the Canadian wheat we eat today has similar nutritional composition to that which our grandparents enjoyed.

With a blend of carbohydrates and protein, and with a composition rich in vitamins, minerals, dietary fibre, antioxidants and phytochemicals, plus its ability to form many products, wheat foods provide important nutrients. These studies provide scientific evidence against the claim that modern wheat has been bred to have changed protein levels and be somehow less nutritious than older varieties.

Of course, we’ll leave the art of baking up to you.

Dr. Ravindra (Ravi) Chibbar, Ph.D. is a professor and Canada Research Chair, Crop Quality (Molecular Biology & Genetics), department of plant sciences, College of Agriculture and Bioresources at the University of Saskatchewan. He focuses on how to improve grain quality (cereals and pulses) so that in addition to providing calories, grain-based products improve gut health and reduce incidence of obesity and cardiovascular diseases. Dr. Chibbar sits on the Scientific Advisory Council for The Healthy Grains Institute (HGI). For more information about The Healthy Grains Institute, please visit www.healthygrains.ca.