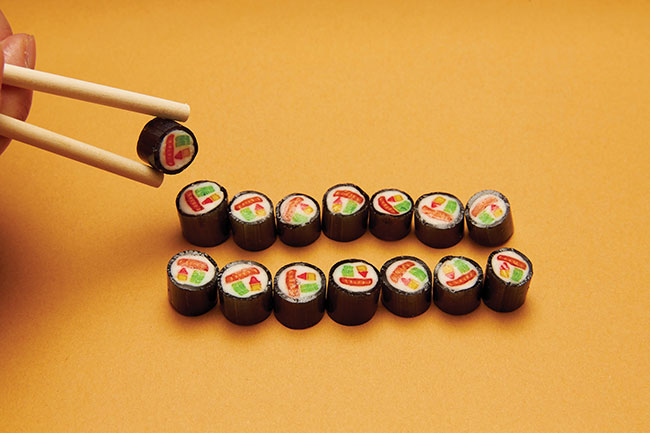 At Candylabs in Montreal, customers can choose candies by the flavour or by the design in the candy’s centre. PHOTOS: CANDYLABS

Within the industry there are murmurs that candy making is a lost art. This is not true. Across Canada new shops are opening, as talented candy makers share their joy in crafting the perfect confections.

CANDYLABS
Candylabs in Montreal is known for its signature rock candy, all hand made in the store. Owner Lin Geng studied to be an accountant, but plans changed. “I fell in love with candy making during a trip to Europe. My wife and I then flew to Australia to learn the skills,” he
remembers.

Candylabs opened eight years ago and today the team of six produces 200 kilograms of candy per week.

To make the candy, hot, boiling sugar is placed on a slab of granite to cool, before food colouring is added. “We add citric acid to the candy to make it more robust,” Geng explains. “We stretch the gigantic piece of candy on a hook, to put tiny air bubbles into the sugar, so it becomes shinier and crunchier when you eat it.”

Customers can choose candies by the flavour or by the design in the candy’s centre. When asked to select a favourite, he says, “It’s quite hard for me to choose among the 75 flavours that we currently have. I would say that my personal favourites are watermelon, key lime, and strawberry-kiwi.” Mixed packages are also available such as classic fruit mix, tropical mix and citrus mix.

As for the most popular designs, Geng says, “That’s easy. The panda, the dog and the pig.” And while many of the designs are intricate, the rainbow centre is structurally simplistic, yet with more colours.

To achieve the rainbow centre, assorted colours of candy are made, stretched, flattened and then layered. “Water is like superglue to candy. We use the water from a sponge to stick one piece of candy on to another. You have to be careful, because once they are stuck, you can’t separate them anymore.”

Next, the candy is rolled on a heated surface to maintain its shape. Each end is cut to inspect and ensure the interior is set correctly. Then, a transparent candy sheet is rolled around the rainbow. The gigantic piece of candy, now weighing 10 kilograms, must be stretched into thin rods. Finally, each rod is hand cut into individual candies.

Confections in Calgary was born in Wigan, England, Sarah Foy of Volio’s 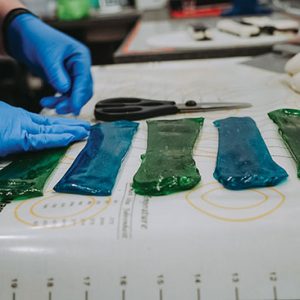 and like a character from a Roald Dahl novel, she grew up close to a small, old-fashioned candy factory. Uncle Joe’s. 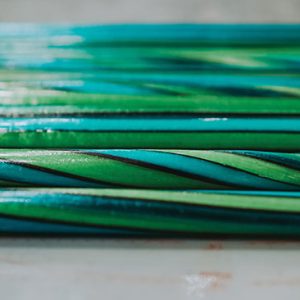 “When I moved to Canada, I missed the candy. I couldn’t find it here, so I had to make my own,” she says. PHOTOs: CAMERON AND ALIX SULLIVAN

VOLIO’S CONFECTIONS
Sarah Foy was born in Wigan, England, and like a character from a Roald Dahl novel, she grew up close to a small, old-fashioned candy factory. Uncle Joe’s, which opened in 1898, fulfilled her childhood sugar fantasies. Watching homemade candies being made by hand, she indulged in thousands of Mint Balls, made from the family’s original secret recipe. “When I moved to Canada, I missed the candy. I couldn’t find it here, so I had to make my own.”

Poring over old British cookbooks and watching YouTube videos became an obsession, and she practised her new skills diligently. “I still can’t make the Mint Balls like Uncle Joe’s,” she admits. Her candy-making efforts, however, resulted in the 2019 opening of her own tiny 400-square-foot shop, Voilo’s Confections, in Calgary, with her business partner and boyfriend David Sullivan. He has now learned the art of candy making and helps Foy in the kitchen.

The hard candies hand crafted at Volio’s Confections come in a variety of 50 flavours. Foy continues to enjoy the challenge of creating new images in the centres. “I think about breaking every image into shapes. To make grapes, I need 10 circles of purple and two green triangle stems. Each strip of candy is built upon another. I need to keep it moving, and warm, or it will go flat.”

As for the top-selling hard candies, Foy says, “I have to keep salted caramel in the store or customers are mad at me!” Her two personal favourite flavours are raspberry-black currant and mango-coconut. A recent development is a hard candy with 20 fruit flavours combined.

“Lollipops are one of my favourite candies to make,” says Foy. “They are fun, because I get to play with stripes and various designs.”

Customers are in love with her cushiony sponge toffee, although it can be temperamental to make. “It is weather dependent. It needs a cool dry day, and a fan blowing on it,” she says. The sponge toffee is dressed up with a coating of white, milk or dark chocolate. She also adds flavours such as birthday cake or salted caramel.

And then there are marshmallows. “I always thought I hated marshmallows. When I had a homemade marshmallow for the first time, it changed my life! Turns out I just hated the store-bought variety.”

To make her marshmallows Foy boils sugar and glucose, which she slowly adds to bloomed gelatin. “Then, I whip the hell out of it for 20 minutes!” she exclaims. For chocolate marshmallows, chocolate chips added at the end result in a partial melting, allowing for texture and bite. Customers rave over the matcha white chocolate marshmallows or the raspberry hibiscus lemonade variety. 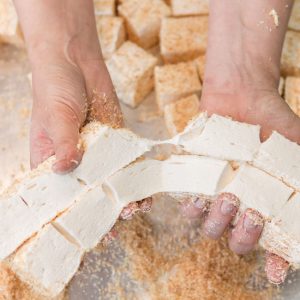 Marshmallows from Victoria’s Tout de Sweet are unique because they are allergen friendly, without corn, gluten, nuts or peanuts.

TOUT DE SWEET CONFECTIONS
After reading about organic cotton candy, Jeanette Miller became curious. After experimenting with candy making in her kitchen, to the delight of her family, her skills progressed. Later, she took her marshmallows to a local farmers market in her hometown of Victoria.

Today, at her retail location Tout de Sweet Confections, her old-fashioned candies are in demand. “My marshmallows are unique because they are allergen friendly, without corn, gluten, nuts or peanuts. Making candy that is free from a few core allergens, as well as being organic, has become a major driving force, and has definitely helped me push through the obstacles I’ve faced being a food entrepreneur. But each time I receive a note that says how appreciative someone is that they can eat or give my candy to someone who has a major allergy, it reminds me of why I took this route, and it gives me a little push to keep going.”

Then she adds, “When I started my business, I wanted a nostalgic play on candy, with modern flavours.” The marshmallows are available in vanilla, toasted coconut, chai tea and at Christmastime in gingerbread flavour. A small message on her website reminds customers that coconut is classified as a seed in Canada.

Gumdrops have turned out to be the number 1 seller in the last six months. “They are bigger than the typical gumdrop, with way more flavour. They are a buoyant candy with a chewy textured. The factory-made packaged type is usually way too soft or way too hard,” she comments. Some of the tempting flavours include black currant, sour cherry, orange creamsicle, champagne for a celebrational pop, and holiday hibiscus for Christmas.

Preparation of Christmas candies begins in August, and Miller calls in a part-time assistant to help with creations.

As we reflect on the confections our parents and grandparents enjoyed, it’s wonderful to imagine the joy candy makers bring to both children and adults today, by reintroducing traditions. Maybe this article will inspire the Willy Wonka in you. /BJ