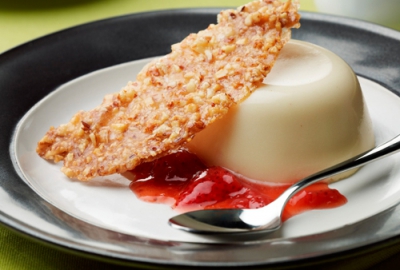 In a medium saucepan, bring toasted almonds, almond paste, almond milk, almond extract, sugar and salt to a boil. Turn off heat and let steep at room temperature for 15 minutes; return to a rolling boil.

Pour heavy cream into a mixing bowl and sprinkle gelatin over the surface of the cream. Let stand for about five minutes, then whisk to incorporate. Add hot almond cream and whisk smooth. Strain through a fine-mesh sieve into a large metal bowl. Place bowl over a larger bowl filled with ice water and stir until cool.

Divide panna cotta base amongst ramekins. Carefully transfer to refrigerator and chill overnight until fully set.

In a large pot, combine the rhubarb, strawberries, vanilla bean and water over medium heat and cook, stirring frequently, about 10 minutes, or until the rhubarb is just tender.

Add sugar and salt. Continue to cook over low heat, stirring occasionally, until jam has just thickened, skimming off and discarding any foam that rises to the surface. Add remaining sugar, to taste, if needed. Continue cooking until jam has reached 104 C (220 F) on a candy thermometer. Remove from heat and stir in lime juice.

Carefully spoon jam into heatproof jars. Let stand uncovered until room temperature. Store in the refrigerator until ready to eat.

Combine all ingredients in a large mixing bowl and stir until evenly combined. Refrigerate overnight to harden.

Divide praline base into eight to 10 pieces and place on baking sheet, evenly spaced apart. With the palm of your hand, press praline firmly to flatten. Bake until golden brown, about six minutes. Let cool on baking sheet to room temperature.

To serve, dip ramekins into a bowl of hot water to loosen the side of the custard. Gently invert onto desired serving dish. Top with strawberry-rhubarb preserve and a piece of almond praline.

Source: This recipe was created by pastry chef Jenny McCoy, co-founder of Ciss Gourmet Baking Mixes, for the Almond Board of California.