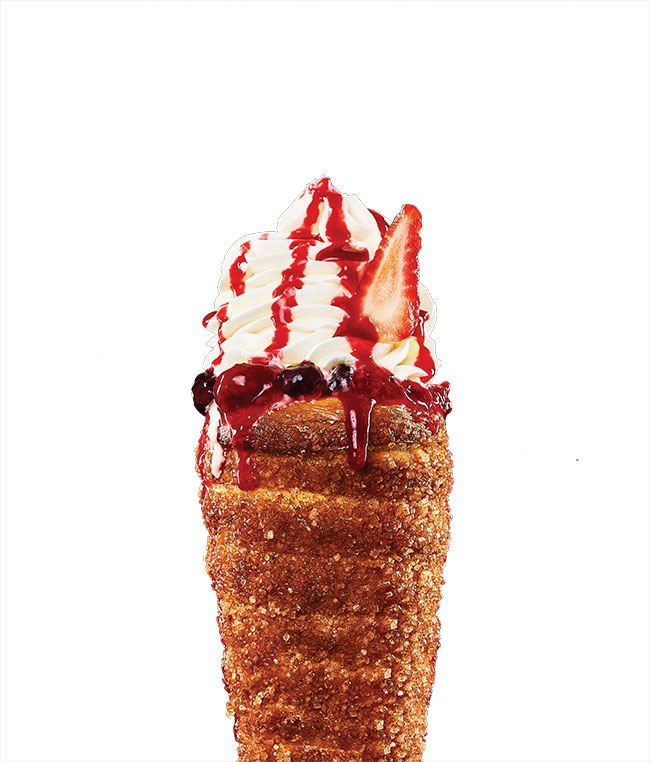 Watching the cakes spin on their custom made rods is almost as much a treat as eating them. photo credit: Eva’s Original Chimneys

This summer, ice cream served in exotic cones is a popular trend with chefs and restaurants around Canada and the United States. Croissants, Cruffins (croissant-muffin hybrids), and even traditional Hungarian chimney cakes are seen in bakeries, pop-up shops and food trucks.

With clients more concerned than ever with avoiding wasteful packaging, a sturdy pastry wrapping is a good solution for frozen takeaway treats, and presents a good use for day-old pastry, further reducing food waste.

The Froissant, a portmanteau of a frozen dessert with a croissant base, is known popularly as the ‘ice cream croissant.’ At Churned Creamery in southern California, it’s their signature dessert, and named the ‘CroCream.’ Popular flavours at the Creamery include Whiskey and Cream, Panna Cotta, and Black Forest Cake, which can be topped with honey walnuts, slices of blood orange, or organic coconut pulp.

The Cruffin has also been popular, many bakeries such as Edmonton’s La Boule Patisserie and Bakery offering it as standard fare for breakfast or as a treat. Inclusions, such as chocolate ganache, jam are often featured. For the summertime, a topping of a scoop of high quality ice cream elevates this from a snack to a dessert.

One of the latest, non-traditional ice cream dishes is the chimney cake. Toronto’s Eve’s Original Chimneys specializes in Hungarian chimney cakes, also known as the Kürtöskalács in Hungarian, or Trdelník in Czechoslovakian. The cakes are cooked into a cone shape, and can be filled with ice cream. This provides the ice cream aficionado with a layer of crunchy, sweet goodness followed by a light and fluffy interior alongside a scoop of their favourite ice cream. Eva’s Chimneys adds special ingredients to dress up the cones and they become almost a dessert-meal on their own.

Kristin Butler, co-founder of Eva’s Original Chimneys says, “When we debuted them, people got really excited. We had huge lines and positive response. We still sell out quickly during busy times. The cone shape with ice cream is a little bit smaller, and then it is filled with ice cream and toppings. The dough is preservative free and you eat the cone right off the grill. It is made just a few minutes ahead of being consumed. We have a team of six people who are needed to make the chimney cones.”

Justin Butler’s grandmother, Eva, who came to Canada from Hungary, was the inspiration behind the shop. The traditional pastries were a special treat she told Justin about when he was a child. During a trip to Hungary, the husband and wife team fell in love with the cakes. With a little planning, they were soon ready to debut the unique ice cream filled chimneys.

The ‘cone crew’ duties include preparing the recipe, rolling out the dough, setting it up on the custom-made rods, rolling the un-grilled dough through a variety of spices and sugars, then grilling the dough on a traditional style, open gas rotisserie (rather than deep frying.) The cone grilling stage, says Butler, is tricky. It is important to get the balance right between crunchy outside and softer inside. During grilling, the sugar will caramelize, which give some of the crunchy bites to the cone. Once off the grilling rod, the dough cannot be too hot or the ice cream will quickly melt. Leave the finished dough cone too long, and it may not taste as good. Some current popular flavours of chimney cones include Matcha Crunch, White Chocolate Raspberry Cheesecake, Thai Mango Sticky Rice, Lemon Berry Mascarpone.

Eva’s Chimneys uses seven basic ingredients for their chimney cone recipe. Unbleached flour, organic coconut milk, organic cane sugar, sunflower oil, lemon, fresh yeast, and sea salt. Vegan options are available at some locations. While traditional dough may be made of less-healthy ingredients, it was important to the Butlers to keep the cones healthy as well as trendy. Flavours vary depending on seasons, and the only way to get a custom-made cone is by waiting in line.

“Having them ready-made would not work for us,” explains Butler, “We specialize in made to order, fresh product. We wanted a custom recipe with vegan and organic ingredients.”

Fresh, healthy and innovative are on trend for pastries this year, whether you prefer your ice cream or sorbet inside a croissant, Cruffin, or chimney cone.