These dessert hooligans think outside the pastry box 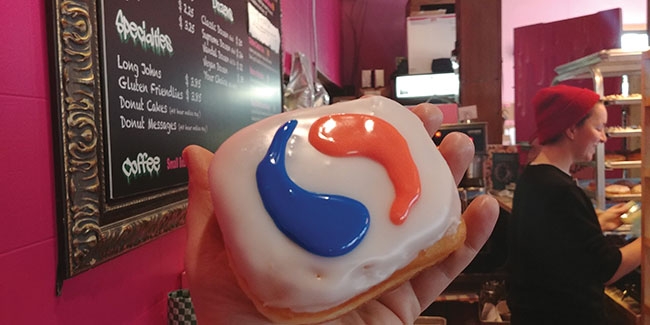 The controversial Tide Pod Doughnut was created to have kids eat doughnuts, instead of participating in ill-conceived detergent-eating challenges. Photo credit: Vandal Doughnuts

Sonia Mota, current co-owner of Vandal Doughnuts has an appreciation for the offbeat. The doughnut shop she co-owns with Nicole Tufts currently resides inside Gus’ Pub, a bar on Agricola street in Halifax.  “We knew from the get-go wherever we put our location, we wanted it to be a little different,” said Mota.

“We didn’t want one of those pristine, brick-and-mortar doughnut shops. We wanted really quirky, odd locations, like maybe a bar, or maybe an old church, or an old mechanic shop – stuff like that. So, it’s a beautiful relationship – it works perfectly.”

The front window lives up to its name, with the company’s logo spray painted across the glass as though a vandal had tagged it with graffiti. Inside, Tufts and Mota have over a dozen flavours of artful, novel doughnuts ranging from a decadent chocolate doughnut topped with a Ferrero Rocher ball, to their most popular Simpsons inspired creation: A plain, pink frosted doughnut decorated with rainbow sprinkles. Formerly known as the Homer Simpson doughnut, they changed it to the “Okely-Dokely,” to avoid lawsuits.

“No matter how many flavours we have, or how complex we get with them, people just go back to the basics. They just want the Okely-Dokely doughnut,” Mota says, shaking her head.

Mota is tired but excited. A week before this interview had taken place, Vandal Doughnuts had participated in a hectic but very successful fundraiser, Burger Week. The small shop raised a huge amount for the local food bank, simply by selling a very special burger.

“We raised forty-five hundred dollars for Feed Nova Scotia, and there’s a hundred and twenty five restaurants that participated this year, so that gives you an idea of how much money was raised.”

Burger week is the brainchild from a local independent newspaper called The Coast, a publication that also helps organize and promote the fundraiser. Each participating restaurant sells a burger, and donates the proceeds to the food bank.  It’s a simple idea that was well received, and Mota and Tufts wanted their doughnut shop to participate in Burger Week – but in a special, Vandal way. They ran with their maverick brand, and Tufts’ creation of The Doughnut Burger would allow their shop participate in Burger Week.

“When I first heard the idea, I was skeptical. I’m not a big burger person in the first place, so I just let her take the reigns on that one. But I couldn’t believe the reception!” exclaimed Mota. “We sold, on average, about 850 of them a day. And our shop is tiny: It’s like 200 square feet! I couldn’t believe how many of those Doughnut Burgers we sold! It was wild, absolutely wild.”

What’s in the sandwich that could make an avowed non-burger lover change her mind about the Doughnut Burger? “It’s an apple fritter, and inside it you have grass-fed beef, two slices of crispy bacon, cheddar cheese and some chipotle aioli and greens,” explains Mota. “The sweet and salty just go beautifully together. It’s like nothing I’ve ever tasted before. It’s wild.”

The secret of Vandals’ success seems to be in running with their wilder ideas, and trusting in the quality of their product. Their controversial “Tide Pod Doughnut” is a lemon-filled doughnut, iced with the titular detergent’s colours, mimicking the pattern and colour of the pods. “We made the Tide Pod Doughnut in hopes that kids would just come in and eat the doughnut instead of eating an actual Tide Pod,” explained Mota. “Anyway, I guess the media got a whiff of it and we ended up on the news across the country for that one. Pretty funny.”

Mota and Tufts both came from restaurant and business backgrounds, respectively. They knew that Vandal would not survive on dreams alone, and set up a plan where they could grow their business instead of operating it. “We knew exactly how the business needed to be structured and where we needed to be sales and volume wise, so we could do this full time.

“I attribute a lot of the quick growth we have seen to the fact that we made this decision so early on,” states Mota. “You can’t grow a business if you are baking or serving customers for 10 hours a day.”

She’s seen a lot of entrepreneurs struggle with the decision to leave the craft of baking to another professional, or to delegate financial decisions to an accountant, but Mota says that despite the challenges of entrustment, it’s a choice that is all about timing. Vandal’s owners’ chose the right time to train and delegate tasks to new staff, allowing them the show to grow. What is the future going to hold for Vandal?

“Right now all we are thinking about and focusing our energy on is nurturing our flagship store and the two new satellite locations.”

Update
No stranger to controversy, Vandal Doughnuts’ newest flavour has recently caused online uproar with their “Kinky Trump” doughnut. Launched in response to harsh tariffs, the doughnut appears on their Instagram page, captioned “tariff me, baby.” Sporting a pink gumball for a ball-gag, the President’s pastry effigy is iced in peach fondant to mimic his spray-tanned hue. Comments on their social media were divisive, and occasionally abusive.