A historical tale of baking and spice 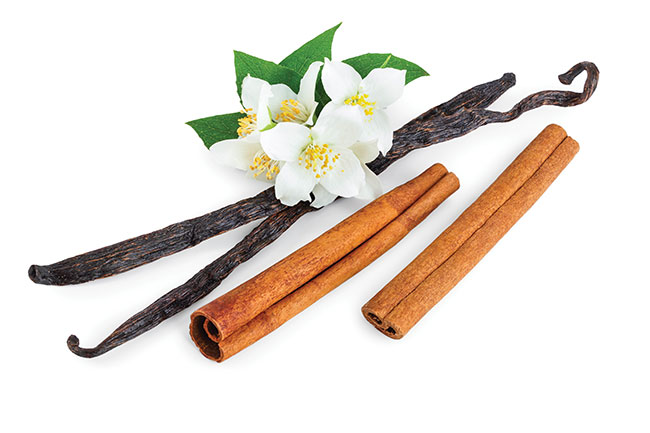 Can you tell the difference between authentic cinnamon and its more affordable version, cassia? Photo credit: © kolesnikovserg / Adobe Stock

In 1512, the Portuguese reached the Moluccas (Eastern Indonesia) and hit the nutmeg myristica jackpot. The Dutch would later dominate taking over the East Indies spice trade. They maintained control by cleverly dipping nutmeg seeds in lime juice to prevent germination and therefore smugglers. The British found a way to snatch the seedlings and plant them in Trinidad in 1806, St. Vincent in 1812, and Grenada in 1843. While Indonesia still supplies 75 per cent of the world’s nutmeg, tiny Grenada supplies 20 per cent. That spice is so important to Grenada, that the country features nutmeg prominently on its flag.

The first small harvest from a nutmeg tree takes seven years. A heavy tree with a shallow root system, it can easily fall victim to tropical storms.

Growing up to 20 meters tall, with large leaves and white flowers, it bears a light-yellow fruit, resembling a plum, with white and green markings. Once ripened, it makes a delicious jam. The nut reveals a hard core coated in an avril or red mesh covering, which is used for the spice, mace.

The nuts are left to dry in the sun, for a couple months until the seed rattles. Then the shell is cracked using a club or machine to reveal the grey-brown nutmeg.

Freshly grated nutmeg tastes superior to the purchased powdered form. Tiny nutmeg graters are designed specifically for the task or use the small holes of a box grater. A sewing needle can be inserted into the nut, extracting a small drop of oil, as a sign of freshness.

Out of fresh nutmeg? Substitute for dried mace. It has a similar flavour to nutmeg, but with lighter, almost citrus notes.

CINNAMON
In the first century A.D. a Roman pound of cinnamon Cinnamumum zeylanicum, measured then as 350 grams, cost 5 kilograms of silver. The Portuguese found cinnamon in immense amounts in Sri Lanka, in 1505. The fickle King of Kandy, owned most of it and sold it at his whimsey.

The Portuguese also had to face the Dutch, who slowly took over the European cinnamon trade. Soon, they had their own plantations thereby eliminating the King. With such as abundance of cinnamon it was burned in Holland to keep the prices high. The French conquered Holland during the Revolutionary wars, nabbing Sri Lanka. In 1795, the English took control.

But the Dutch and French outwitted everyone by smuggling out Sri Lankan cinnamon sprouts and transplanting them in their controlled regions.

The dark, shiny-leaved bush grows to 2.5 meters high, from either seeds or cuttings. The bark must be extracted with a special knife, then left in the sun to dry for up to five days. The outer layer is then scraped off.

Cassia or Cinnamomum aromaticum is the less refined, less expensive cousin. It has its origins in China, but today is also cultivated in Vietnam and Indonesia.

Both are sold as cinnamon; the ingredient list will not show the tree source. So, how can a savvy baker tell the difference? When purchased in bark form, genuine cinnamon is light brown, papery and brittle whereas cassia is reddish and studier. The first has a much floral smell, while cassia is hot and spicy.

ALLSPICE
In 1494, during Christopher Columbus’ second voyage, his team almost all but ignored the allspice Pimenta dioica tree, while in Jamaica. Europeans hadn’t learned of the culinary value of the trees until 1570. Francisco Hernandez, a scholar sent to the Americas by King Philip II, observed the Aztecs flavouring their chocolate drink with the dried berries of the allspice tree.

The bushy tree, has a long thin trunk has a soft grey-brown bark that sheds every year. It blooms with white spidery flowers, producing round berries, each containing two kidney-shaped seeds. Berries are picked when green, order to preserve their flavour and later ripen to a reddish brown. Each mature tree can produce 30 to 40 kilograms of allspice per year.

Today, Jamaican allspice is most treasured for its flavour that has the unique taste properties of cinnamon, cloves and nutmeg combined. Home bakers may mistake it for a spice blended of the three!

VANILLA
Vanilla or Vanillia Planifolia has its roots in Central America, the West Indies and northern South America. Christopher Columbus was the first European to taste it, through the hospitality of a Nicaraguan village chief, in 1502.

Of the 20, 000 different types of orchids identified only one has a purpose beyond beauty— the genus Vanilla, with approximately 50 species. Only one produces genuine vanilla and that is Vanillia planifolia.

The exquisite flavour comes at a high cost due to the time-consuming nature of cultivation in countries such as Madagascar, French Polynesia, Tahiti, Indonesia and Mexico. Wild vanilla has all since vanished, leaving botanists to debate which specific species of bee or butterfly was once responsible for pollination. Cultivators must now hand-pollinate, using the climbing plant’s own pollen for this finicky orchid to thrive.

Of the over 1000 blooms that appear at dawn on a mature plant, the pollinator selects only the best dozen. By dusk the flowers will wither. It takes four to nine months for the vanilla beans to emerge and harvest begins when the beans start to turn from green to yellow, later maturing to a dark chocolate brown.

The flavour of the vanilla bean develops in processing. One traditional method is to dip the bean in boiling water before picking it, stopping the ripening and developing the enzymes in the fruit. The beans are left to cure in the sun for up to six months and are sealed for shipping to trap in the delicious aroma. Vanilla beans are graded by quality and size: The longer, the better.

So, the next time you pick up a spice to add into your recipes, think back to its historical journey and labourious growth cycle. This will lend new appreciation on how spices have travelled from tree to table.