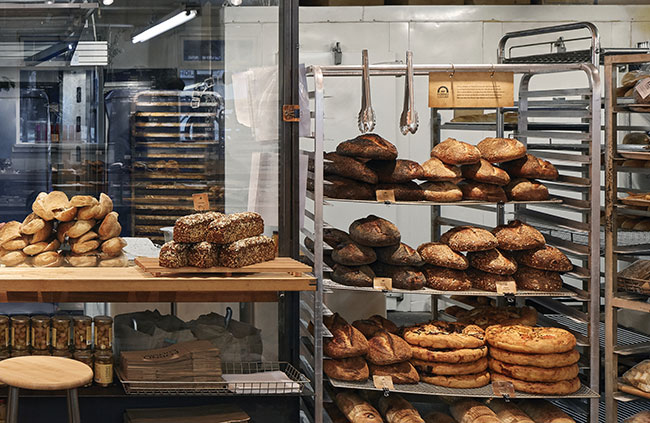 Old world breadmaking in a modern setting hasn’t changed the flavour nor the passion for the craft of Italian baking. Photo credit: Riley Snelling

For Andrea Mastandrea, founder, and owner of Forno Cultura, Italian baking runs in the family. It has been part of his everyday life for as long as he can remember. “I am a third-generation baker, who grew up watching my father and grandfather baking naturally leavened semolina bread, made with my family’s Lievito Madre,” he says. “‘Forno’ means oven and ‘Cultura’ means culture. Mother yeast is the base of all baking that we do.”

Today he owns six bakeries in Toronto. Two have large production spaces of over 3000 square feet. There are 168 workers. Mastandrea cannot talk about his business, which he started 10 years ago, without giving a family history about how it all began.

His parents started an Italian bakery, in the city, back in 1971. It appealed to new Canadians, from Italy, who missed the authentic baking they loved, as well as customers born in Canada, who had travelled to Europe. What was totally unique at the time, is that it sold both pastry and bread, unlike bakeries in Italy, which specialized in one or the other. The concept was a ‘success! Today, Aida’s Bakery celebrates 50 years in business.

Mastandrea says his late father Giuseppe, was raised on a farm in Puglia, a peninsula at the heel of the boot-shaped Italy. There, the family grew and pressed olives. This farm is what became the heart of the communal village. “People would bring the breads they made in their kitchens to bake off. The oven was always in operation and at different temperatures throughout the day and night, heating soups, legumes, or braised meats.” Then he adds, “In Italy people are a representation of the land. Puglia is hard, bitter, salty and with a minerality. Hard on the outside and loving on the inside.”

About Salerno, on the Amalfi coast, where his mother Michelina grew up, he says, “Salerno is delicate and floral, with citrus, honey, anise and fennel. I like to say in our kitchen my father was the oven, and my mother is the stove.”

Mastandrea says his parents were supportive in letting him help out in the bakery, even as a child. He was always curious to see how things were made, even doing some research on his own, “My father always received baking magazines from Italy. Bakers Journal was the only one in English. I used to sit in my father’s office and read it cover to cover.”

After years of crafting his skills in authentic Italian baking, Mastandrea started Forno Cultura. His goal was to keep the classic flavours, without compromising ingredients, yet simplifying the form. “We like to think of ourselves as a bakery rooted in the craft and tradition of Italian artisan baking, yet we are born out of these unique cultural extensions we find here in Toronto,” says Mastandrea, who was born and raised in the city. “This allows us to constantly explore the limits and push the boundaries.”

When it comes to making bread he says, “The bakery concentrates on offering our client base, both a locally grown semolina, as well as a specially imported semolina, made from 100 per cent durum wheat, from Altamura, Puglia, Italy. This is one of the few DOP protected wheats, which we still have access to, in today’s world of modified varieties.”

DOP is short for Denominazione di Origine Protetta which translates into Protected Designation of Origin.  This certification ensures that products are locally grown and packaged.

As for top selling breads he says, “Semolina sourdough, a semi sourdough that we use a special blackened method of applying olive oil to the crust during the bake.” Then, he also mentions, “Focaccia Barese and our Curry Olive Oil Brioche are other top seller.”

These breads form the bases for pizzas and sandwiches, that are rapidly purchased and enjoyed. The olive oil brioche is turned into a breakfast sandwich, made with egg frittata, smoked provolone, and black kale. A stuffed calzone contains aged ricotta and fior di latte, which is a semi-soft fresh cheese. Paninis, of all varieties are popular, as are tramezzini (Italian triangle sandwiches), made with cotto prosciutto, speck, Emmental and thinly sliced preserved lemons.

At Forno Cultura, the sweet side has been dominated by the world of laminated doughs. “We have taken a departure from the mainstream, with a different flavour profile and structural esthetic. People ask why our products don’t look like traditional Italian Cornetti, or even French croissants.”

Easter is one of the most important holidays in Italy. During this time, the bakeries do a swift sale of traditional desserts, such as Zeppole di San Giuseppe, the cream filled donut shaped pastry, Colomba di Pasqua, the traditional Easter egg bread, made with citrus peel and almonds and Pastiera di Pasqua, the Italian Easter tart, made with ricotta. Then over Christmas, customers line up for pandorno and panettone, of course!

The there is the Forno Cultura, not to be forgotten, sister bakery Biscotteria Forno Cultura. This celebrational bakery of Italian cookies, is located at Union Station. “The train station is the arrival and departure point for travellers, and they want to buy gifts for friends.”  Here customers can choose from up to 30 different kinds of cookies. The Italian recipes come from four generations of family, each one perfected along the way.

At Biscotteria Forno Cultura, our recipes have been paired down to the basics, without compromising the ingredients. We are in constant research and development, creating simpler products that are more refined.” What are the three sellers? “Cantucci Mosaic, Frolla di Limone, and our landscape of Pasta di Mandorla.”

The traditional of true Italian baking, both savoury and sweet continues at Forno Cultura bakeries and the original Aida’s. For 50 years now, this multigenerational family of bakers have been able to bring a piece of Italy to Toronto.