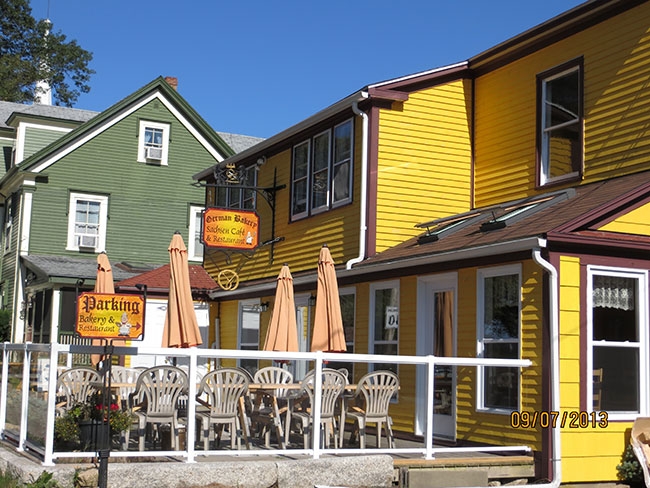 There are not so many people left who want to become a baker,” says Heiderose “Heidi” Claussing of the German Bakery in Port Annapolis, N.S. Claussing would know: She is a third-generation baker and co-owner of the bakery. Her husband, Dieter Claussing, is a Red Seal certified baker and master baker.

The Claussings’ history is one of many Canadian immigrant families that have founded and sustained successful businesses over the decades. Back home in Sachsen (Saxony), East Germany, Heidi worked for her parents in their bakery, which had been in the family for 70 years. Then came the fall of the Berlin Wall. East Germany was suddenly exposed to all sorts of new technology, and the family business started by her grandparents could not quite keep up to the more automated ways of baking that were now popping up all over. While the family business could no longer afford to keep Heidi and her new husband Dieter employed, the fall of the wall opened up the whole world to the couple.

“Always we had dreamed of going somewhere else,” Heidi says. “[When the wall was up], soldiers kept us from going anywhere except the eastern countries of Europe. We thought about the United States or possibly Canada. Then we started looking through all of the classified advertising for bakers.”

They connected with a German man in Nova Scotia who wanted to hire a German baker. So, to Canada they came with a special visa so they could work for a German company. It was like a dream come true for seven months – until the money stopped coming. By the ninth month, the Claussings, with their two young children, knew they were in trouble.

Finding a Way to Stay
A strong, determined woman, Heidi commenced selling baked goods door to door. She said that her English was not very good back then, and sometimes people laughed at the way she would phrase things. But they liked her cakes, pies and bread – proving that food is a universal language we all can understand. However, it wasn’t enough to sustain the family over the long run, and the Claussings knew they would need to figure out something quickly to stay in Canada.

A good friend of the family helped the Claussings find a location at which to bake that had a mixer and oven. Next, their friend went to the immigration office in Halifax and said that she wanted to open a bakery and hire the Claussings. The government agreed and issued new work visas. The Claussings could stay.

Over the next 15 years, they worked hard in the small shop their friend founded. Eventually, they became permanent residents of Canada and opened their own business. After two fires at the building they leased nearly ended their Canadian dream, the Claussings were invited to work at the restaurant affiliated with the Fort Anne National Historic Site. It was a bit of a change going from a small storefront bakery to a bakery and restaurant, but Heidi says they adjusted and incorporated light lunches and other meals into their menu. Eventually, the German Bakery got its permanent home.

Since 2012, the German Bakery has been housed in a property across from the Fort Anne National Historic Site. The Claussings purchased the home and converted it to a bakery with a restaurant. Heidi says, “I have a long history of baking in my family. My grandfather opened his bakery way back in 1917 – one-hundred years ago this year. Now we are celebrating our 15th anniversary of baking here in Canada.”

Persistence seems to play a large part in becoming a career baker. Learning the trade can take several years. Heidi, now a pastry chef, started baking at 16. She went to a culinary school where one week was classroom-type work and the next week was practical work in a real bakery. It was considered an artisanal trade and students did not complain about the workload. Heidi says it was hard work, but after two years she was a working pastry chef and German baker.

For Dieter, the road to Red Seal Certification took the same two years plus an additional three years of training and practice. The couple has been married for 29 years, and they believe in using locally sourced food items and time-honoured traditions such as kneading by hand for some of the pastries.

Building on Past Success, Looking to the Future
While their daughter Susanne is the family business manager, their son Markus is not in the business. But Heidi does not mind. “It takes a lot to be a baker,” she says. “First, you have to put the love in, and the hard work, and it is not for everybody. You should not do it unless you love it. We are very proud of both of our children. Markus is an airplane mechanic.”

In order to promote their business, much promotion is done by word of mouth through various events and local markets. Even with a storefront, the Claussings still tour seasonal and year-round markets selling their wares. This keeps their name – and their food – in the public eye. All of the extra marketing effort might sound tiring, but it has not been in vain. Several celebrities have taken notice of the German Bakery, including Prince Charles and his wife Camilla, the Duchess of Cornwall; celebrity chef Lynn Crawford of Pitchin’ In; and former Nova Scotia lieutenant-governor Mayann Francis.