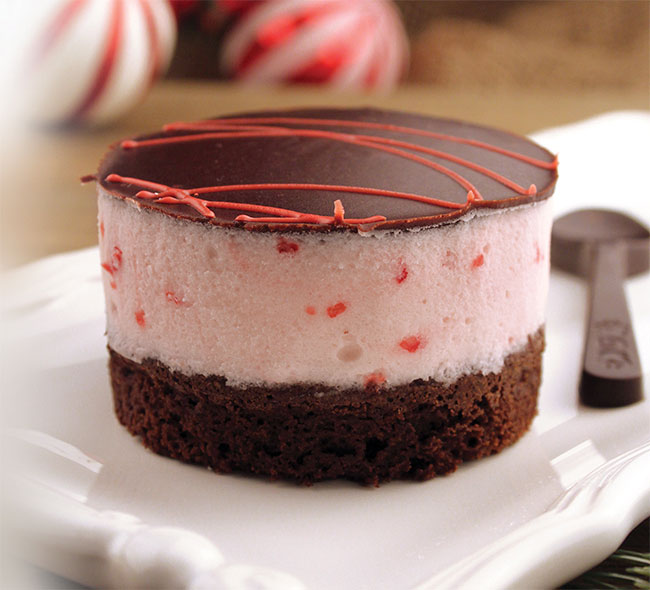 This holiday season, more than ever, I predict people will be celebrating all things festive including baking. Who does not love getting into the merriment of the season with candy-cane ice cream? Eggnog for only two weeks out of the year – why not? Every year people wait with anticipation for seasonal items like panettone and fruitcake, plus twists on classics or limited editions with festive flavours like peppermint, gingerbread, cinnamon, spiced rum, and dare I say pumpkin spice!

One of my holiday favourites is panettone. Is panettone a seasonal bread or cake? Jenny Longo, Director of Private Brands at Longo Brothers Fruit Markets Inc. says, “Both really! Panettone is a cake-like bread, we classify as a seasonal cake. We bring in panettone prior to Canadian Thanksgiving, with most of the imported cakes arriving mid October to early November. Panettone is served as a dessert with sweet wine or prosecco. Today we see multiple uses: toasted in place of bread for breakfast, to make French toast or other desserts.”

Recently, retailers started displaying panettone with non-traditional ingredient like candied pumpkin or apples and cinnamon. Daniel Violante, vice president sales and marketing, Excelsior Foods Inc. explains, “A traditional, authentic panettone recipe includes only butter (no margarine), raisins and candied citrus peel. One other important ingredient is the mother yeast (or starter). This has a huge effect on the overall flavour and texture of the cake. Our supplier uses a 90-year-old starter that dates to the owner’s grandfather. Also contributing to panettone’s incomparable light and airy texture, is the fact it’s hung upside down for 24-36 hours to cool-dry after it is baked.

Curious about the history, Violante describes, “There are various legends circulating regarding the origin of panettone. Probably the most famous involves a botched dessert at the Christmas meal in the home of a Milanese aristocrat. A young baker’s apprentice named ‘Tony’ of course, convinced the chef to make a replacement dessert with whatever ingredients were left in the kitchen – flour, butter, candied fruit, raisins. And boom! The Pane di Tony literally ‘Tony’s Bread’ in Italian was born. The rest is history. The crowd went wild and panettone became the ubiquitous treat to end a meal around Christmastime in Italy. Now, I don’t know if that’s true, but I do know that Milan is the undisputed capital of panettone and it’s enjoyed in large quantities during the holidays, not only in Italy but all over the world.”

Offering seasonal baked goods from Thanksgiving to Christmas gives operators the chance to change up the shelves and menus, plus creates an urgency and renewed interest with their customers. Debbie Gust, President, WOW! Factor Desserts explains, “We’re selective on what we launch for seasonal desserts, recognizing it’s a busy yet short time in foodservice. Launching a dessert that creates interest from Fall to Christmas is one thing but having a dessert that can be plated for different occasions is helpful when there is still inventory on hand in January. For example, our year-round White Chocolate Gift box can easily be dressed up and plated for Christmas, but it also works well at Valentines, and other celebrations.”

WOW! Factor Desserts has eleven seasonal flavours, nine of which are limited editions (two desserts offered year-round including the Warm Ginger Caramel Spice Cake). Guest says, “Our new Candy Cane Mousse was a big hit in 2019 due to its individual serving size, taste, and it’s gluten-free! It checked off many boxes for use on menus and it’s delicious. For years, we’ve been asked to launch full-size Yule Logs. Brand new to our line-up this season, we have two new flavours: chocolate and sugar cream. The Festive Chocolate Yule Log is chocolate cake, crunchy chocolate crumble and silky-smooth chocolate mousseline rolled together. The Festive Sugar Cream Yule Log is a classic vanilla cake, with cream fudge furled together and garnished with exquisite vanilla mousseline and caramel dollops. We’re excited about these new products, as they fill a gap in the marketplace, and we know they’ll be well-received.”

It’s such an indulgent time from October to early January with deliciousness selling out quickly! Which seasonal favourites will you offer your customers to promote holiday cheer this year?

Jane Dummer, RD, known as the Pod to Plate Food Consultant, collaborates and partners with the food and nutrition industry across North America.
www.janedummer.com