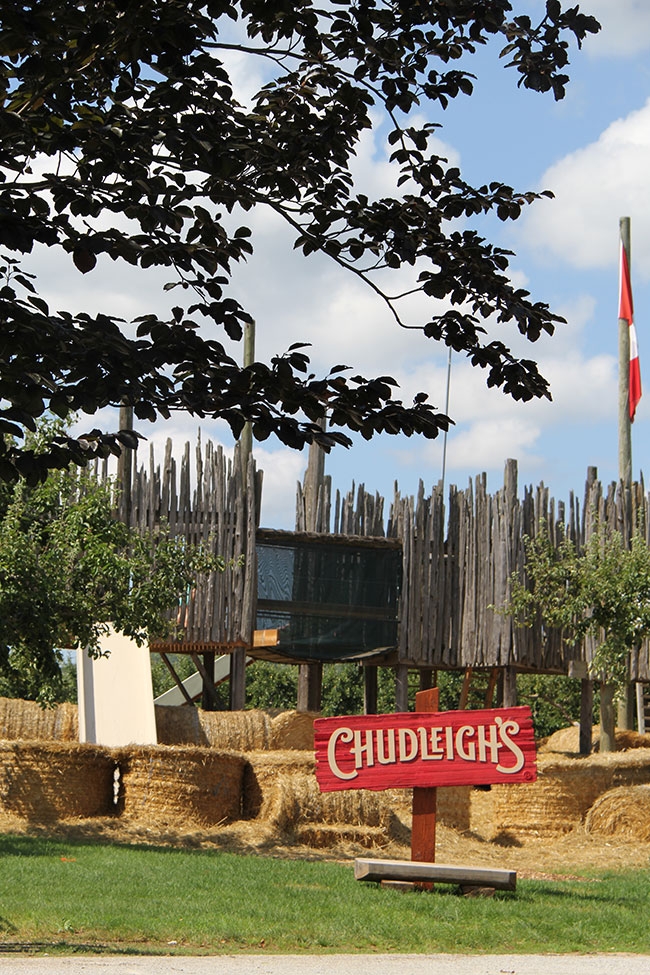 One doesn’t go from apple pie sold on the farm to 110,000 square foot bakery overnight. For Chudleigh’s, it took roughly 18,250 nights. That’s about 50 years worth of sweet dreams.

Chudleigh’s is a crossover success in agriculture and baking. In 1962, Tom and Carol Chudleigh began living at the family apple farm in Milton, Ont., which was being worked by Tom’s father.

In 1967, the farm began welcoming city visitors seeking a farm experience and offered apple picking and wagon rides. If the farm made $23, that was considered a good payday. They were one of the first to offer “entertainment farming”, a form of tourism now popular in southern Ontario.

In 1973, Carol baked the first apple pie for sale. The pie was cut into 25 pieces and a quarter would get you a slice.

Fast forward a bit to 1990, and a fire destroyed many of the buildings. Less than two weeks later, the bakery was up and running. However, the 90s were not all bad. In 1995, Chudleigh’s created its signature apple blossom, which began as a product for foodservice. Now the bakery makes around one million apple blossoms a week — from scratch.

In 2004, Tom was inducted into the Ontario Agriculture Hall of Fame. In 2007, the bakery moved into its current commercial home and launched molten chocolate lava cakes and pineapple upside down cakes.

It’s 2017, and Tom and Carol’s sons Dean and Scott are running the farm and bakery (although Tom and Carol still live there and it sounds like Tom is still quite busy around the place).

The chudleigh sons
I toured the Chudleigh farm with Dean, who is now the 3rd generation in the business.

Dean describes his childhood on the Chudleigh farm as a turn through the whole catalogue of Norman Rockwell. He appreciated learning to drive early on, whether it was a tractor, dune buggy or motorcycle. He learned mechanical skills. And he also learnt a thing or two about alcohol production that became a particularly humorous childhood memory. The farm traditionally pressed and sold sweet apple cider. This meant there were cider jugs around frequently. As youth, Dean and his brother discovered something unusual about forgotten plastic jugs that had spent about a month in the sun and were now bulging at the sides.

“We didn’t really enjoy drinking the cider, but we loved the way we felt after drinking the cider and we had no idea what was going on, but we knew the bulged jugs of cider were the good ones. So we’ve been drinking hard apple cider for decades now unknowingly. It was just the natural fermentation. That is one of about 1000 stories I could tell you about growing up here.”

Dean returned to the farm in 1986 after attaining a four-year post-secondary degree. This was to be the jump start into the family business that would change the trajectory of Chudleigh’s forever. He started by shoveling out old cattle stalls to make room for a small bakery operation with a few employees making pies. He took the pies and sold them in Toronto.

Dean stops his story for a moment to point to the apple trees. Apple sales on the farm started as a sign at the end of the drive beside a pile of apples and an honour box to collect payment. It was his grandfather who started importing the miniature apple trees that didn’t require a ladder to pick from. At the time this was unheard of, but now it’s all anybody plants.

“As the saying goes, when everybody goes left go right,” says Dean as he squints into the sun beating on the 100-acre farm’s horizon. “A lot of times that can be a really big flop, but when it works, it really works.”

Although Dean spends most of his time at the bakery plant, we’re chatting at the farm because as he explains, this is where the brand essence was born — a real family, and a real place with real food behind it. The crux of the food brand is characterized as wise and playful. The products are wise because they are useful and convenient (microwavable for example), but playful because they are a bit unusual, he says. This is why they would choose to pursue a product like pineapple upside down cakes over something like a croissant. They are not looking to compete with mass produced items.

The farm has a whimsical feel, one likely imparted by those that have worked its earth. Dean recalls one year in the mid 1980s. Halloween was drawing near and the pumpkins in their patch were mysteriously still green. No one could figure out why, and the family was concerned. A kid might be quite upset to come out for a bright orange pumpkin and find green ones instead. The Chudleighs picked the pumpkins anyway, putting a big pile in the yard. Tom got an idea, bearing in mind this the time of great popularity for the Teenage Mutant Ninja Turtles. He put a sign outside the big pile of green pumpkins that said Teenage Mutant Ninja pumpkins. He sold the whole pile in a day.

“It’s a great example of how life was and is here. It’s also a great business example because sometimes it’s not until you get backed into a corner that you come up with your best ideas.”

The 1980s marked a significant shift for the Chudleighs. In the 1970s, the farm was growing vegetables and selling big bags of them. A decade later, no one was buying big bags of apples or potatoes anymore. In the late 1980s, the Chudleighs started charging admission, which was $3 and worked up to be on par with a movie ticket. They recognized entertainment was really what they were selling at the farm. The farm now employs 100 people in its peak September-October apple season, and hosts about 75,000 guests.

finding growth in private label
When it came to the bakery, which now employs 300 people, the Chudleighs grew the business chiefly through private label. To this day, 90 per cent is still private label, says Dean. While the apple blossoms probably stand out as the most successful, he says they have had a number of hits. One theme stays the same throughout, one that is now on all of their new marketing material: every batch from scratch.

The apple blossom recipe hasn’t changed since it’s been scaled up, but it needs to be tweaked depending on the raw materials. Apples vary depending on where in Ontario they are grown and what kind of growing season it was. Chudleigh’s processes over 65 per cent of Ontario Northern Spy apples, chosen for taste and how well they stand up to the baking process. Flour will also arrive with different protein qualities that needs to adjusted for. These kinds of factors are offset by temperature controlled rooms in the bakery and eagle eyed staff in the mixing room.

While baking from scratch resonates well as a marketing tool these days, Dean says it was not really their intent. He found a from-scratch approach to be the easiest way to control for factors in the finished product and keep consistency. When they decided to make caramel apple blossoms, caramel was prohibitively expensive so they made it instead. Now they make thousands of kilograms of caramel every day.

The business has come a long way from pies on-farm to commercial bakery. I ask Dean if there’s a moment when he knew the business had “made it.” To this he recalled presenting Red Lobster Canada, many moons back, with a rough version of the apple blossom. They had 30 restaurants, which was big at the time for Dean and Scott, who were serving customers with one or two locations. Red Lobster loved it so much, unbeknownst to the brothers, they sent it to Red Lobster in the U.S., who had 600 stores. They wanted it in every restaurant right away. Dean and Scott were hoping for 30 locations and wound up with 630.

“You’re really happy for about a minute, and then you think “how am I going to make this?” I think that every one of us in this business experiences that moment.”

On the farm, the family knew it had something good going when a busy day saw traffic backed up to Highway 401, leaving cars crawling for hours to make the last three kilometre leg to the farm.

LOOKING AHEAD
After many years of growing the commercial baking side, Dean and Scott hired Connie Morrison as COO to help take the business to the next level. Part of the new focus has been to increase their branding exposure after a long history of success in private label.

As part of the push forward, Chudleigh’s is launching savoury blossoms, which are being tested on the farm. Initial flavours include pulled pork, pizza, butter chicken and beans and greens. These products are designed to more centre-of-the-plate centric than the desserts, while still focusing on the wise and playful character of the brand.

The 50th birthday celebrations have been a good opportunity for Chudleigh’s to celebrate with special events and gain additional media exposure.

Five decades in the making, and Chudleigh’s continues to innovate. Let’s see what they come up with next.