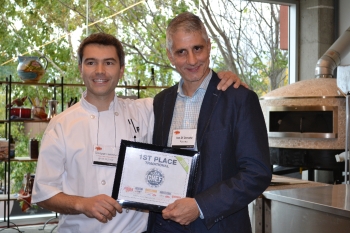 Canada’s top pizza makers came from all over Canada, but only two chefs were crowned the winner for 2018’s Canadian Pizza Summit. The winners will go to Las Vegas to the Food Expo.

The competition was held in Faema’s headquarters in Toronto. Competitors chose to compete in one of two divisions, “Traditional” or “Open.” “Traditional” pizza, for the purpose of the competition was defined as a pizza with a red sauce, and only two of the following ingredients: pepperoni, sausage, bacon, ham, mushrooms, peppers, tomatoes, onions and olives. Any variation of those toppings would be qualified as an extra ingredient.

Giuseppe Cortinovis of Ignite Pizzeria in Vancouver won chef of the Year, for his Margherita pizza, in the Traditional division. First place in the open competition went to Dean Litster for his creative take on a pan pizza, called The Dean Martin.