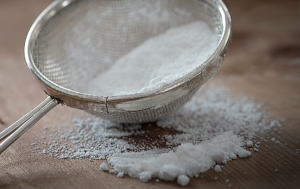 A Canadian and Chinese collaborated study funded through the Natural Sciences and Engineering Research Council of Canada (NSERC) found that baking sugar might burn off some of its caloric content.

UBC food scientists measured the content of sugar-based calories before and after submitting cake dough to baking. The study involved the same recipe but using different kinds of sugar, in two cakes: one contained a mixture of fructose and glucose and another included domestic table sugar. The scientists then compared the amount of sugar retained in each cake after baking.
In order to measure the samples, they freeze-dried, and ground the cakes into powder and then used enzymes to mimic human digestion.

By comparing the sugar content before and after the baking process, the researchers found on average up to 20 per cent sugar loss in cakes made with invert sugar, according to the study’s lead author, Ningjian Liang, a food science PhD student at the time of the research.

The results of this of this study implies that the caloric information listed on commercially packed baked goods might not be as accurate as originally thought. The World Health Organization suggests that diets should not exceed a maximum of 25 per cent of calories derived from added sugars.

The details of the study can be found here: https://www.omicsonline.org/open-access/sugar-loss-attributed-to-nonenzymatic-browning-corresponds-to-reduce-calories-recovered-in-lowmolecularweight-fraction-2155-9600-1000674.pdf

Related
Sugar, Sugar!: A look at the functional role of sugar in baking.
Almonds have fewer calories than previously thought
Baking Without Sugar
Technical talk: Use of sugars in baking