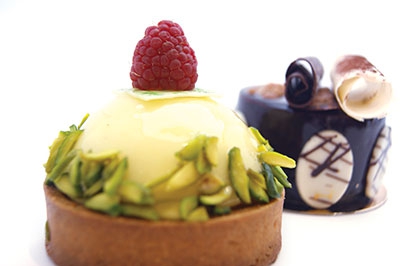 The Vendôme (left) is made with sweet paste, almond cream, white chocolate and lemon cream and pistachios. The Flandrin (right) is made up of 58 per cent dark chocolate mousse with an almond dacquoise and chocolate praline crunch.

Paris has long been known as a city where passion and indulgence reign; where chic patrons flock to bakery cafés for hand-crafted baguettes, rich French pastries and artisanal chocolates.

But one does not have to travel to Paris for a truly French experience. Torontonians can find one right in their own backyard.

Named best baguette in Toronto by Toronto Life for the past five years and snagging BlogTO’s “Best baguette in Toronto” for 2014, Thobors is making a name for itself. Co-owners Marc and Sylvie Thobor, along with their three children – Jimmy, 27, Shanice, 22, and Marcsy, 18 – emigrated from Paris to Toronto in 2005 when Marc took a position as master baker at Le Comptoir de Celestin. In 2008, the owners of Le Comptoir were looking to sell and the Thobors saw an opportunity. “When we moved to Canada we never expected to buy a business so fast,” Sylvie explains.

With Marc’s passion for bread and Sylvie’s business savvy, the pair’s success is not surprising. At age 16, Marc knew that he wanted to spend his life working with bread. “I don’t have family in the bakery. I just learned everything from some good people, some chefs in France and they gave me the passion. I apprenticed for three years and got my diploma,” he says.

He continued to hone his craft in several of Paris’s traditional boulangeries and trained under Parisian master pastry chef Pascal Flandrin, improving his skill and talent. Marc’s baking is a combination of knowledge and feeling, where ingredients and passion meet. When he arrived in Toronto, he quickly discovered that baking in this new climate required some adjustments.

“When we moved here,” says Sylvie, “the first hot, humid season the dough was poofing everywhere and he’s like, ‘I don’t understand,’ but now we know! You have to adapt yourself to where you are in the world.”

When Marc and Sylvie decided to buy the bakery in 2008, they did so as a family. They moved the location one door north from where its predecessor, Le Comptoir, was originally located and changed the name to Thobors Boulangerie Patisserie Café. With Shanice as store manager, Marcsy assisting her mom with chocolate-making and Jimmy helping out when he can, every family member has a role.

Speaking with Sylvie, an accredited pastry chef and accomplished chocolatier, one would never suspect that the bakery is her second career. She previously ran a hair-styling business for 27 years. When she and Marc decided to buy Thobors, she was ready for a new challenge. “I quit my job to help out, but I didn’t want to just be the baker’s wife, selling bread. So we decided I should go back to France and train there,” Sylvie explains.

She returned to Paris where she earned her pastry chef diploma and trained with several of Paris’s celebrated pastry chefs. Sylvie attended the renowned Cacao-Barry Chocolate Academy in Paris and also won a Concours de la Meilleure Patisserie, Chef d’entreprise 2010 award at the prominent Paris pastry competition. In 2012 she was fortunate enough to train with two of France’s top pastry chefs, Stephane Glacier and Stephane Leroux, as well as with the same master pastry chef as Marc, Pascal Flandrin, whom she credits with sparking her passion for chocolate-making.

“I’m the proof that everything is possible. I hear so many people say, ‘I’m 45 and it’s too late to change and do that.’ When I got my diploma I was 43 and now I have half of my career as a hair stylist and the other half as a pastry chef. I remember that when I flew to Paris I thought, ‘What if I don’t like it? What if I don’t want to do it?’ But chef [Flandrin] gave me the passion.”

As with Marc’s bread, Sylvie’s pastries and chocolates reveal her ardour for the craft. Thobors is the kind of bakery where you can find exquisite chocolates, mouth-watering breads and pastries-galore, along with bilingual customers often preferring to speak in French. In short, it’s a true Parisian bakery. “What’s really surprising is that when we opened six years ago we had maybe 20 per cent francophone [customers]. Now on busy Saturdays we have more Francophone than Anglophone [customers].”

Marc agrees, adding that Thobors’ customers are what make the bakery so special. Their willingness to try new products and provide feedback has created a reciprocal relationship between baker and patron. “Every time, when Sylvie makes something new or I make a new bread, customers like to try it and then I start to make more,” says Marc.

“We are lucky because we have a really good clientele, both regulars and new people,” adds Sylvie.

Always looking to the future and never afraid of a challenge, Marc and Sylvie are giving serious thought to additional locations; however, it’s not their priority. According to Sylvie, the priority is to maintain the stellar reputation they’ve been building since opening the doors in 2008.

“Expanding to multiple locations is what we’re looking for … but if in five years we don’t have another location but we have the same reputation, that’s fine by us. We work with opportunities, so let’s see. But we like to be here, we like what we do and we’re really happy with our store. We feel really grateful for that.”