Celeste Mah, pastry chef at Raymonds restaurant, in St. John’s, Newfoundland, was in a state of shock after finding out she had been nominated as Canada’s Best Pastry Chef 2019 through Canada’s 100 Best Magazine.

“I had a call from the magazine to do a Q and A,” she recalls. “Then they invited me out to a party in Toronto. At first, I thought they wanted me to work it, but my husband (Ross Larkin, chef de cuisine at Raymonds and winner of Top Chef Canada in 2018) said they probably were inviting all the pastry chefs they had interviewed to the event,” she says, with a laugh.

“Maybe other people would have clued in before me. But it wasn’t until one of the producers came over, about a half hour before and said, ‘Okay, Celeste. We want you to stand over here when the awards are announced,’ that I figured out what was happening.”

The Culinary Adventure Begins:
Mah started her journey twenty years ago by entering the Baking and Pastry Arts program at the Vancouver Community College in the city she grew up in. She always loved baking with her mom, so she followed her heart. “To this day, my Mom (Anne Mah) still makes the best apple pie I’ve ever eaten.”

For the past five years, Mah has been making all the breads and pastries for the 60-seat restaurant.

When talking about her favourite flavour combinations Mah says, “I don’t like desserts that are too sweet. I use a lot of vegetables. I like roasted parsnips and cream together, and blueberries and pineapple weed.”

As for her plating style, Mah says, “It’s very simple and clean. That’s my whole philosophy. With two to three flavours max. Sometimes I will just use one. From there, I use various techniques and textures. I will often add an element of surprise hidden inside. And I like to use different temperatures. There are no classics, all are contemporary desserts.”

But then Mah laughs and says, “I have some customers that love crème brûlée. So, I will make it just for them.”

Overnight Culinary Sensation:
Raymonds has become a destination restaurant for visitors to Newfoundland, reaching number 12 on Canada’s 100 Best Restaurants 2019 list. Between May to the end of September the restaurant is open for dinner only, seven nights a week, yet it still turns over seats two and a half to three times per night. And, during this time, Mah has a full-time pastry cook to assist her.

In May, the à-la-carte dessert menu included: a blueberry toasted bread and nutritional yeast ice cream trio; and a back current dessert using the berry to make a curd, with black current leaf gel, crème fraiche with sunflower and oat granola with blackberry sherbet. And partridge berries (also known as lingonberry in Scandinavian countries) were turned into sorbet and vanilla ice cream with a partridge berry swirl served with pound cake and the tuille, that both contained poppy seeds.

Pre-Dessert, Then Dessert:
The tasting menu dessert included a honey roasted blueberry salted caramel and pineapple weed mousse, with homemade graham crackers that were crumbled with extra butter, sugar, milk powder and salt. Mah describes the dessert by saying, “It’s a sweet and salty combination all mixed together.”

For the pre-dessert before the dessert menu arrives— a two-inch buckwheat pancake, with sunflower seed butter, blueberry and partridge berry jam and candied sunflower seeds. And after dinner a petite four – a cornmeal macaroon, with blueberry lavender ganache. 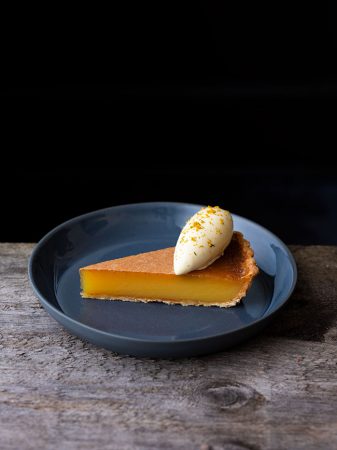 Growing Season Inspires Menu
The growing season in Newfoundland is quite short, so during the summer the kitchen is busy freezing, jarring and pureeing everything.

Nostalgia As Inspiration:
Mah speaks of her inspiration: “It’s very easy to get ideas. I talk to people about what they like or flavours that they liked as a child. I get ideas from savoury dishes more than desserts. A new cooking method for a vegetable or how it is presented on a plate.”

Working as a pastry chef involves many long work hours in the kitchen. “There is always so much to learn.” Says Mah. And that’s exactly why she loves it.