Features
We scream for ice cream 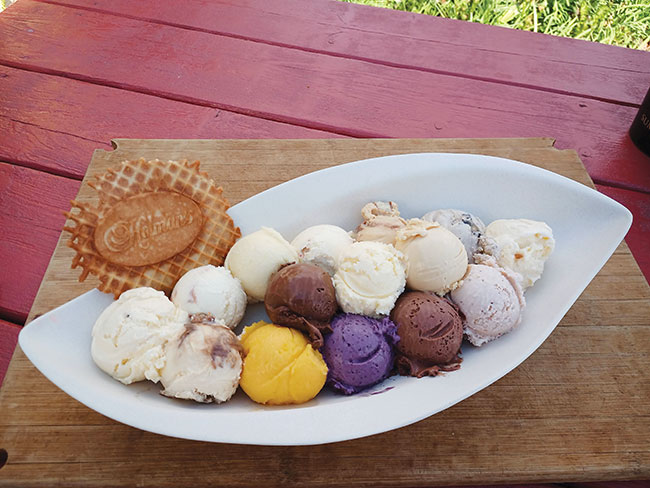 Ice cream is always a summer treat. The classic flavours have been pushed aside for more dynamic offerings. Variety is key to keep customers lining up.

Summerside, Prince Edward Island, is an oceanside town of almost 15,000 people. As the second largest city in the province, with its proximity to the Confederation Bridge, it is a tourist destination. Gradually, everyone makes their way to Holman’s Ice Cream Parlour for one of the town’s best scoops of ice cream.

When local bed and breakfast owners Ken and Jenny Meister saw the 19th century, architecturally stunning house, once owned by the prominent Holman family was up for sale, they had an idea. “We thought the house looked like the perfect location for an ice cream parlour. The only problem is, we didn’t know how to make ice cream!” says Ken. They formed a business plan. “Western Prince Edward Island is dominated with soft serve dairy bars. We wanted to create a premium hard ice cream.”

The house needed lots of repair. After purchasing it Ken and Jenny were busy with hammers and nails. Daughter Sarah, one of the couple’s five children, was just 16 at the time, but determined to come up with the perfect vanilla custard base.

“I read a lot of cookbooks and recipes about making ice cream. I would test out recipes and get my family to taste them. Once we found the samples we liked best, I developed my own recipe that was very creamy,” remembers Sarah, adding that she had to make a few batches every week, for four to five months before she was successful.

While she was happy with the results of the ice cream, she was making with her tiny ice cream maker, it was not practical for production. “When I started using the industrial batch freezer, it would churn the ice cream much faster. This would sometimes cause the ice cream to separate and turn into butter! I started adding slightly less cream and more egg yolks and sugar to emulsify it better.”

The batch freezer from Italy, holds 10-12 litres of ice cream at a time and freezes it quickly. Then, ingredients are added to the base and it goes into a blast freezer. This keeps the air from escaping the ice cream. After resting for 1-2 days, the ice cream is moved into a regular freezer to make it softer and scoopable.

Today, Holman’s Ice Cream Parlour has over 100 flavours for customers to choose from. The flavours continually rotate depending on season and what the regulars are craving. The company is proud to offer ice cream made with local Prince Edward Island milk.

“Honeycomb has chunks of honey sponge toffee and vanilla ice cream. Salted Caramel Crunch has homemade toffee, in a salted caramel base,” says Sarah, “We make amazing Cookies and Cream with Oreos and a caramel swirl. Some of my personal favourites are Raspberry Cheesecake, and S’mores, which has toasted marshmallows, milk chocolate and graham crackers.”

Waffle cones are made in house using flour, butter, vanilla, sea salt and brown sugar that gives the cone its colour.

Sodas are new on the menu this year. “I like the idea of adding handcrafted, natural sodas to the list. We have an antique soda fountain from the 1930’s. This, along with the house lends itself to the old-fashioned pharmacy style,” says Ken. “Soda can be so much more than the kind we are used to drinking. Great soda is made with natural flavours.”

Some of the sodas on tap include homemade ginger ale, made with just ginger, sugar and water, as well as root beer and lemon and lime soda. All can be turned into ice cream sodas.

The production space at Holman’s Ice Cream Parlour is just 252 square feet. The front service area is 468 square feet, with seating for 42. Outdoor there is seating for 34.

Out in Victoria, British Columbia, in another tiny production space of 250 square feet, with just a side service window is Kid Sister Ice Cream. Opened by couple Brett Black and Colleen Rode, in 2011, today the production is run by Colleen’s daughter Willow.

“We are a small batch company, dedicated to quality and sourcing both locally and organically,” says Willow. “We buy 10-20 kilos of local fruit at a time, then process and freeze for later. This year we even had a farm that grew Meyer lemons locally.”

Brett was always the ice cream hobbyist, even selling his confections at the local market, before deciding to open shop.  The company had to downsize both space and staff this year, when the request for ice cream scoops dropped off, due to Covid 19. The kitchen used to have three people in production and a few people selling out front. Today, it is just Willow in production and one person working at the window.

All the raspberries, marionberries and rhubarb come from the one-acre garden, that is part of the 1910 house, Brett and Colleen own.

Ice cream is sold in pints and half pints. “The most popular flavours are tiramisu and salted caramel. The most popular vegan option is the coconut passionfruit. It is super creamy even without the dairy.”

As for sorbets, Willow says classic flavours are always popular, such as lemon, strawberry, and lime. Sometimes customers like to mix it up with two flavours combined. “We have combinations that we swirl together in production like swirl of strawberry with lemon, or a swirl on mango, in coconut.” And then there are the seasonal crops. “We use fresh peaches in season to make sorbet. A frozen peach just never tastes the same.” Then, she adds, “My favourite sorbet in the fall is concord grape.”

Ice cream bars are made with numerous flavours of ice cream. Sometimes it is one flavour or sometimes two or three. These bars are then dipped in chocolate or crushed crumbs, such as the classic key lime pie bar.

Ice cream is a summer favourite. The tradition remains as ice cream shops push the limits on flavours and product offerings. / BJ