Variable frequency technology in today’s mixers can be a great benefit to bakers. 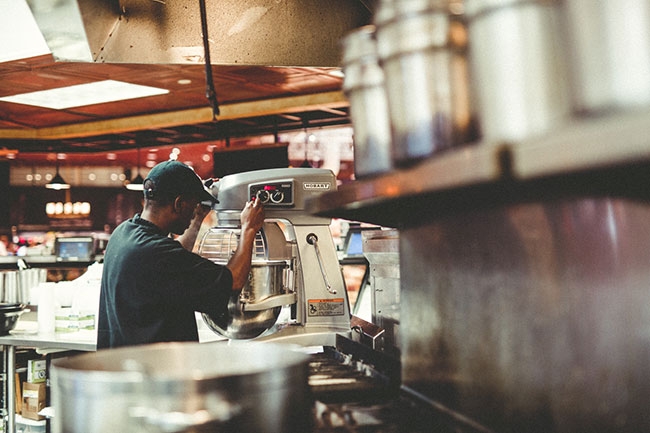 A key benefit of choosing a mixer with VFD technology is the time savings and improved productivity that can result from greater ease of use. VFD mixers on the market allow operators to easily shift speeds without stopping the mixer.

Mixers are a staple in almost every commercial kitchen — an equipment workhorse used for everything from bread and pastries to pizza dough. Whether you need a mixer that is 12 quarts or 140 quarts, there are technologies available that help provide greater reliability and consistency.

Choosing a mixer with variable frequency drive (VFD) technology can deliver benefits for ease of use, productivity and lower total cost of ownership over the life of the equipment. A variable frequency drive mixer also allows for the inclusion of additional technologies that provide more control over mixer speed — resulting in precise mixing and reduced ingredient splash out.

While mixers with VFD technology require a greater initial investment, they offer reliability along with reduced maintenance and repair costs in the long term — without sacrificing power, efficiency or speed.

How does VFD technology work?
There are three types of drive systems commonly used in commercial mixers on the market. Consider the key differences among these types:

A variable frequency drive uses a single gear train — a simplified design that results in reliable performance. And because it has fewer moving components, it also can reduce instances of maintenance and repair over the life of the mixer.

The flexibility and control provided by VFD technology offers benefits for many applications. A mixer with VFD technology can ramp up to various speeds, which is useful for recipes that require many different steps and mixing of ingredients. Operators can mix ingredients at a certain speed for a set time period — using the mixer’s digital timer — then add another ingredient and change the speed for another set time period.

Time savings
A key benefit of a mixer with VFD technology is the time savings and improved productivity that can result from the unit’s ease of use.

In a standard drive mixer with constant motor speed, the mixer must be stopped to allow the user to change speeds by shifting the handle, then restarted. Stopping in the middle of a batch adds time to the process and can change the consistency of the ingredients, resulting in a change in the food output.

VFD mixers on the market include technology that allows operators to easily shift speeds without stopping the mixer, so they can slow down or speed up the unit with a quick turn of the knob.

Less wasted product and cleanup time
Another benefit is the gradual acceleration that VFD technology allows, which can reduce wasted product, as well as time spent on cleanup in the kitchen.

A mixer full of flour and water that spins very fast upon startup can splash ingredients out of the mixing bowl. VFD technology lets the mixer accelerate slowly — providing a “soft start” — which reduces the risk of ingredients splashing out during startup.

A variable frequency drive also provides the ability to slowly increase or slowly decrease motor speed, for varying levels of control depending on the unit load. This improves the experience for the operator, and saves time and money thanks to less ingredient waste and easier cleanup.

A key benefit of choosing a mixer with VFD technology is the time savings and improved productivity that can result from greater ease of use. VFD mixers on the market allow operators to easily shift speeds without stopping the mixer.

Speed and power to meet mixing needs
A mixer with a variable frequency drive motor provides much greater control over speed and accuracy — resulting in consistent ingredient mixing and consistent food output.

Look for a mixer that offers a stir speed, which is slower than first speed and allows operators to slowly stir in ingredients to help eliminate splash out. A standard drive would require a fourth set of gears to achieve this type of slower speed, but with VFD technology, a mixer’s speed range can easily be expanded from three speeds to four without adding additional gears.

And because the drive controller in a VFD system is constantly monitoring the system speed, it maintains steady speeds when mixing heavy loads such as pizza dough. Maintaining high torque is important to consistently mix dough, and a VFD system has the capability to apply the necessary torque across a wide range of speeds.

Reduced repair costs
Investing in a mixer with variable frequency drive technology can lower total cost of ownership over the life of the equipment.

Overload protection senses how much load or resistance there is on the mixer, and will automatically shut the unit off if it becomes overloaded, protecting the gears and motor from damage. Thermal protection is similar, providing automatic shut off if the current has been too high for too long.

Technology to save time and money
With great reliability, improved ease of use, reliable mixing performance and the flexibility to meet specific power and speed needs in the kitchen, a mixer with VFD technology delivers the results needed in most any commercial kitchen.

Brian Bader is a senior engineer at Hobart.