Refurbishing your café or bakery affordably 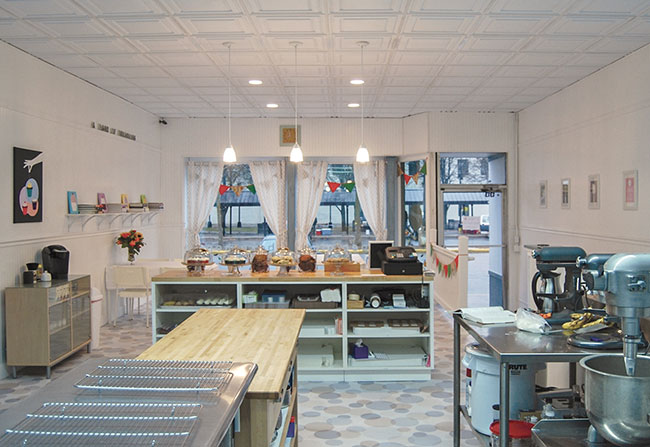 The kitchen at A Dash of Delicious is continuous with the front-of-house. The washable thermoformed ceiling is approved for use over food preparation areas, and unifies the space. Photo credit: Photo courtesy of Ceilume.

Bakery shops can be designed in a variety of styles, yet successful stores have one thing in common – a sense of freshness. As a shop gets older and the years begin to show on the walls, floors, ceilings, and fixtures, that freshness can fade and start to look more like three-day-old pastry. One quick and easy way to rejuvenate the look can be a ceiling makeover. Ceilings are often ignored by designers, but they are highly visible, and present an opportunity to redecorate with minimal disruption of your business. Bakeries like the Helen Bernhard Bakery in Portland, OR have used decorative thermoformed ceiling tiles to implement an affordable upgrade that keeps its fresh look for decades.

The Helen Bernhard Bakery is a family business run by two families for almost 100 years. It was established in 1924, starting as a home business, baking cakes for friends and neighbors, and expanding until it took over the entire house. By 1939, it was so successful that Bernhard and her son Ben built their own building, where the bakery still operates today. In 1988, the Bernhard family sold it to Richard and Mary Laufer, who passed it along to their daughter and son-in-law, Kellie and Mike Snaadt, in 2011. Over the years and through numerous changes to the shop, the families have prided themselves on keeping a home bakery feel.

“When we took it over,” recalls Snaadt, “nothing had really been done to the front end, other than a couple of new cases, in probably 40 years.” There was a lot of tradition in the shop, but some of it was in bad condition. The walls had ½-inch thick wood tongue-in-groove paneling, a detail worth preserving. But the ceiling was lath and plaster that had been damaged and stained significantly. “Somebody had exploded a pop can on the ceiling,” Snaadt recalls, “and a couple of times they’d tried to put up a light fixture and loudspeakers;” all attempts that lefts scars and holes. Lighting was supplied by rows of surface-mounted fluorescent fixtures with wrap-around acrylic lenses that had yellowed badly and couldn’t easily be replaced.

The challenge was to refresh the appearance of the shop without losing its heritage. The Snaadts focused on the ceiling, the lighting, new paint, and new display cases. Some of the paneling was painted white to lighten things up, but enough was left natural to keep the original feel. Instead of the old fluorescents, they found LED disc lights that look like recessed can lights. Purchasing new cases was not a problem.

Selecting a ceiling
They didn’t know what to do about the ceiling, however. At a relatively low eight-foot height, it was visually prominent, and showed significant damage. Mike and Kellie found that fixing the plaster would be difficult and costly. Ripping it down and drywalling the entire ceiling would have entailed an extended shutdown of the front end of the business. They watched home shows and searched the internet for other options.

“We’d always talked about a pressed-tin ceiling look being really cool. We looked up pictures of old bakeries, and most of them from the turn of the previous century had some kind of pressed ceiling,” said Mike Snaadt. However, he was reluctant to use actual stamped metal tiles, both because of the high expense and the hazardousness of handling and cutting the tiles with their razor-sharp edges.

Then, Snaadt made a discovery online, thermoformed ceiling tiles made by Ceilume in Northern California. The tiles are thin, lightweight sheets molded into three-dimensional designs, ranging from traditional patterns reminiscent of ornate plaster and stamped metal to contemporary geometrics, timeless coffers, and other architecturally versatile looks. The Snaadts looked at some competitive vinyl tiles, too, but ultimately selected Ceilume’s as the only choice that seemed substantial and durable.

They selected “Nantucket,” a shallow-relief design that captures the stamped-metal look they were seeking. After considering different colours and finishes – Ceilume offers ten colours as well as three wood-grain and three metallic finishes – the couple decided that the low ceiling height called for white tiles to create an illusion space. “Any kind of colour would have made it look too cave-like,” according to Mike. 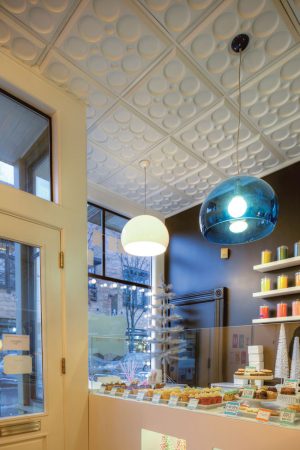 Installation
He used a layout tool on Ceilume’s website to figure out how much material he needed, and ordered what he describes as “a four-foot stack of tiles.” He got an electrician to install the LED disc lights while his tiles were being shipped.

Snaadt laid out the center lines of the bakery ceiling and got to work gluing up tiles with help from his father-in-law. When Covid-19 forced the bakery to cut back staff, he was able to do most of the installation by himself, and never had to close the shop for it. “I did 80 per cent of it myself with a four-foot ladder and a pair of tin snips. Cutting the edge pieces was no big deal at all. Every couple of days, I’d put up 20-30 tiles, glue them up while I wasn’t waiting on customers. I had ordered all new cases for the front end, and I figured I’d better get the tiles put up before the new cases came in.”

After the glue-up was completed, Snaadt discovered he needed to install additional LED disc lights, but they proved easy to add. “It was really simple to cut the hole out and set the light fixtures.”

The thermoformed tiles are stain-resistant and impermeable to water. When painting the walls, Mike was able to remove any fresh paint that got onto the ceiling with a damp rag. “If anything gets onto it from the other construction work,” he reports, “it comes off with ease.”

As the remodel took shape, the Snaadts’ youngest child Clarissa summed up the change saying “It used to look old. Now it looks vintage.” The bakery’s new look has gotten many compliments from customers, too, especially the ceiling.

Suspended Ceilings
A shop with a suspended grid ceiling can also take advantage of the thermoformed ceiling option, since the tiles are compatible with most standard T-bar grids. Common mineral fiber acoustic tiles found in many suspended ceilings cannot be washed without damaging them; Ceilume’s thermoformed ceilings, however, are easily cleanable. In a suspended grid, they can be wiped down in place, or even taken out and washed in the sink. Because they have smooth, non-porous surfaces, they are approved under health and safety codes for use in food preparation and food service areas. This allows designers to open-up the kitchen to the front-of-the house and create a unified, hygienic, and engaging look throughout the shop.

For example, A Dash of Delicious, a cupcake specialty shop, took a plain white store with an open-kitchen and transformed it into an appealing boutique by giving the walls and ceiling texture, with linear wall paneling and a shallow coffer ceiling (Ceilume’s “Cambridge” style). Saint Cupcake pursued a similar strategy, using a contemporary ceiling pattern called Roman Circles that recalls cupcake baking pans. In both projects, the decorative ceiling provided a way for the shop itself to express the concept essential to the brand, the idea of baking with style.

In buildings with fire sprinklers, Ceilume’s thermoformed tiles offer an interesting technical advantage; they can be installed underneath the sprinklers, avoiding the expense of extending the sprinklers below the ceiling and having to the cut holes in the tiles. The thermoformed tiles are approved as drop-out panels; in the event of fire, heat softens the panel so that that they drop out of the suspension grid and allow the sprinklers to activate and suppress the fire. That property proved valuable to Small Batch Organics, a commercial granola bakery in Vermont (see Baker’s Journal, April 2020 page 13). Two years ago, the company renovated a former warehouse space to build their new kitchen, and faced a huge plumbing bill to extend the sprinklers. Using the thermoformed drop-out panels allowed them to keep the existing sprinklers. According to the firm’s general manager, “this saved enough money that the ceiling paid for itself.”