No hiding place for metals in ‘wet’ and conductive baked goods |

Improvements in the accuracy and reliability in food production metal detection allow it to pinpoint even the smallest fragments and most elusive grades of stainless steel. Photo: © dusanpetkovic1 / Adobe Stock.

Too often, metal detection technology can be eclipsed by the hype surrounding other types of inspection systems, notably x-ray, occasionally leaving the wildly inaccurate impression that the older technology is some sort of fringe, anachronistic throwback. For a few short years, some even speculated that x-ray would become the default technology for end-of-line contaminant inspection.

That scenario never materialized. In fact, metal detection today not only remains the backbone of food safety compliance for the majority of the baked goods and wider food sector as a whole, but has also made huge strides forward in the last few years in terms of accuracy and the avoidance of false positives.

Specifically, simultaneous multi-frequency scanning makes it much easier for food manufacturers to identify hard-to-find metals in food products with high conductivity (so-called ‘wet’ products). These items may, literally, have high water content, but above-average conductivity may also be linked to high levels of minerals, particularly salt. Other variables such as temperature and density can also affect readings.

Product effect has posed a challenge for North American baked goods producers for years. Salt content is a significant factor in generating product effect. But moisture content and temperature can also create challenges, especially in batch production where there may be major differences in these variables over time. Density variations and inclusions (such as seeds) in bread can also complicate the situation.

Manufacturers of ‘wet’ products have often had little choice but to tune their metal detection in a way that reduced margins of error and consequently tended to trigger excessive numbers of false positive rejects. It should come as no surprise that there is a hefty price tag attached to such levels of inaccuracy, in terms of product losses and line stoppages. This is especially true of lines running higher-value artisanal products. One general food industry estimate puts potential costs per production line at up to $18,500 per annum, depending on food type, cost, and line speeds.

Recent improvements to metal detection technology have dramatically reduced this type of problem. In practical terms, some of the newest systems are capable of pinpointing metal fragments with dimensions half those detectable with the previous generation of equipment, with the same degree of reliability.

Any reputable supplier of metal detection equipment understands that, while compliance with Hazard and Critical Control Point (HACCP) requirements for food safety is of the utmost importance, manufacturers increasingly have their own overall equipment effectiveness (OEE) targets too. If the metal detector on a given line cannot distinguish between the ‘product effect’ and metal contamination and this problem repeats itself, it can have a massive impact on line performance and wider OEE. 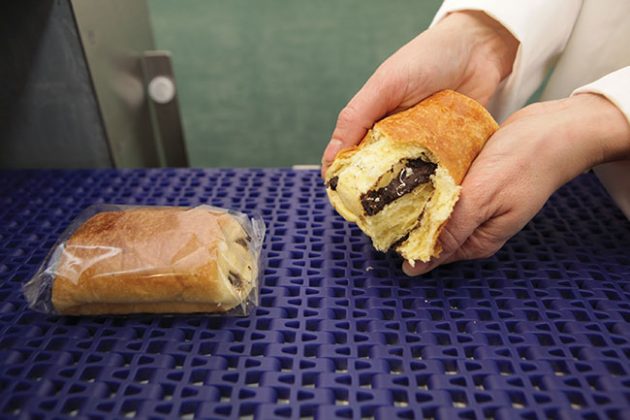 There are two distinct components to metal detection: magnetic permeability and conductivity. Most bakery products will leave a ‘fingerprint’ that combines elements of both, though the overriding component is likely to be conductivity. Metals also exhibit telltale combinations of both types of effect. For example, the majority of ferrous metals display stronger magnetic permeability, while non-ferrous metals will signal higher conductivity. Indicators for stainless steel, on the other hand, can easily be swamped by this product effect.

The tendency can be especially pronounced with grades of stainless steel typically used in processing and packaging line equipment, which tend to exhibit low magnetic permeability and low conductivity. This makes these grades of steel among the most difficult metals to detect, but even these tricky characteristics tend not to cause problems, or trigger false rejects, in low-conductivity dry foods. That is far more likely to happen in more conductive ‘wet’ products.

For all these reasons, the bar in metal detection has to be set where the combination of contaminant signature and product effect is most problematic. In other words, for manufacturers of wet products, the ‘acid test’ for HACCP compliance in checking for potential contaminants has to be the detection of hard-to-find stainless steel in their hard-to-scan product matrices. The last few years have seen equipment manufacturers such as Fortress Technology address this challenge – and clear this high bar.

Access to such granular detail, even at high line speeds, has been made possible by applying the same powerful microprocessor technology utilized in today’s most advanced smartphones.

To explain this approach in slightly different terms, the newest systems override the propensity of ‘wet’ product effects to drown out the signal from stainless steel, in particular, by singling out low-frequency signals to eliminate the product effect while leaving the signal from stainless steel more readily identifiable in the higher-frequency range. For the first time, software algorithms are making this possible by distinguishing between signals specific to the product and those that flag up anomalies.

These new levels of performance and reliability have been a game-changer for baked goods producers, and one which can be applied to metal detection not just of finished packs but also of dry mixes and pumpable doughs. Other valuable benefits include the ability to more accurately inspect product packaged in metalized film or foils such as longer-life, dried snack-type products, flatbreads and breadsticks, for example.

Far from falling under the shadow of x-ray inspection, metal detection can rival it in some of the toughest contamination challenges posed by the baked goods sector, while retaining a far more affordable capital cost and cost of ownership. We have witnessed a step change not only in terms of neutralizing the most obstructive types of product effect, but also in key areas such as vastly increased sensitivity and single-pass product learning, allowing much higher levels of OEE, compliance and product safety.

Eric Garr is the Regional Sales Manager for Fortress Technology