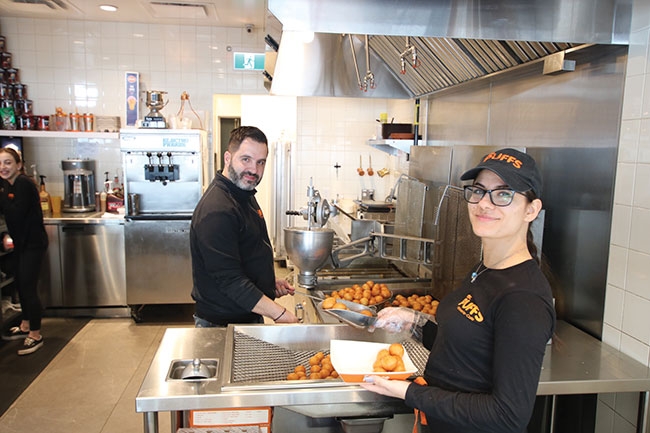 Mr. Puffs celebrated the launch of its 13th location in April 2019. The 15-year-old company is cornering the market on the loukoumades phenomenon with Quebecers eating up 50 million of the small puffy doughballs.

First referenced in antiquity as a token of Olympic honour for athletes almost 3000 years ago, loukoumades are a simple yet special treat: five to six minutes in the deep fryer for a sweet, fluffy interior and crisp shell, lighter than a typical doughnut hole – hence a ‘Puff’– and always enjoyed fresh, usually compliments of a doting Yiayia (grandmother) for generations of Montreal Greeks.

At 25, Billy Siounis decided more people needed to try them, setting off in 2004 to cook and sell them at Greek festivals in Montreal and the north-of-Montreal suburb of Laval.

“I had no clue,” he says. “I walked up to my mother and said, ‘How do I make loukoumades’?” After a couple of summers unloading propane tanks out of his car and shilling puffs in the park, it wasn’t long before Siounis realized he was really on to something, dreaming of how he could commercialize this niche ethnic product.

No stranger to the audacious, Siounis is one of 11 kids and a rebel who refused the path that he felt lay ahead of him maintaining commercial properties for his father. He preferred the restaurant business, working in kitchens from the age of 15, and never looked back.

“If I could sell them here in Montreal, in Laval, and in ‘Greek town’, then I could sell them anywhere. Remember,” laughs the Mr. Puffs CEO, “Greeks are eating these, grandmothers are watching you, you can’t get away with bad pastry in Montreal. There’s no second chance!”

At the 2010 Grand Prix people ‘were going crazy for it’ he recalls. He witnessed all-day lineups, “and how many people were waiting to eat these things, and I laughed to myself, not knowing if people would actually come.” That year, he took the leap and rented a van to haul his wares to festivals. He leased a 950 sq. foot space for a café in a small strip mall in the west end of Chomedey, a predominantly Greek enclave in the Laval suburb. Sales hit $500 per day with basic flavours (hazelnut chocolate, strawberry-raspberry, honey-cinnamon) and wall menus suspended in Ikea poster frames.

Today store sales average $800,000-$1 million, with the best performer being his own (expanded) flagship spot hitting $1.4 million in sales last year. With a hopper full of puff batter cranked out every 20 minutes, churning out 13,000 puffs on a typical busy day in three package sizes of 12, 30 and 50. Siounis’ gamble on “de-ethnicizing” the product to reach larger markets is paying off.

In 2017, a second location was launched in Montreal’s east-end borough of Saint-Léonard. “It was snowing and cold and people were lined up outside the door waiting for us to open” he says.

A fourteenth store is planned this year in Quebec, and “that’s it for Quebec” says Siounis. Teamed up with his vice-president and director of franchising Tom Bountis (founder of the Allô! Mon Coco breakfast chain) is looking westward and southward for immediate expansion into Ottawa and Toronto, and a flagship American store in Orlando, Florida.

The duo now counts more than 2,000 franchisee requests hailing from Dubai to China, South America to Europe, “and yes, even from Greece,” laughs Bountis. “We’re talking about global domination,” adds Siounis, “one Puff at a time.”

With locally sourced ingredients, Siounis says the model is easily replicated. “Ninety percent of our ingredients have a shelf life of six months; it’s an easy product to make and sell.” Along with geographical expansion, Siounis is eyeing a retail line as well, and currently experimenting with new flavours and flash-freezing.

Puffs have become part of Montreal’s urban lore, everyone sharing their “arriving with a half-empty box” joke, most opting to transport them in their trunk to avoid the temptation of fresh Puffs drizzled with chocolate within arms’ reach on the front seat.

It’s a simple product, created with all-purpose wheat flour, canola oil and a hopper. Sionis is not reinventing the wheel, but magic happens after the oil bath when Puffs are flipped onto a counter-top basket prior to dressing. Puffs boasts a growing variety of toppings, adding blueberry coulis and nut-free peanut butter to the list, as well as new flavours for holidays and special occasions.

A yeast-based product with no eggs, dairy, or cholesterol, the Puff swings above its weight in flavour versus calories compared to doughnut holes, the simple 15-gram honey-glazed weighing in at a lean 35 calories, compared to 60 calories for a typical
donut hole.

Beyond the taste, the bite, and the sticky sweetness, it’s about the hype, packaging, branding and the diverse franchise offer. From a full café to a small food truck, festival site stand to a full trailer for corporate events. The chain has a franchise fee of $40,000 (along with a five-percent royalty fee, plus three percent shared by local and company marketing.)

This year Montrealers will also see the return of a new tradition, the annual Canada Day Puff-eating contest: A trophy, cheque, free puffs for a year to whoever downs the most Puffs in 5 minutes (last year’s winner snagged bragging rights with 59 puffs with toppings.) Another major marketing scheme came after the federal government decriminalized cannabis; Siounis took a tongue-in-cheek approach on April 20, inviting Montrealers to show up, say ‘#puffpuffpass’ and receive a free small box. “The lineup stretched outside into the parking lot” he laughs, adding that local radio covered the event with great enthusiasm.