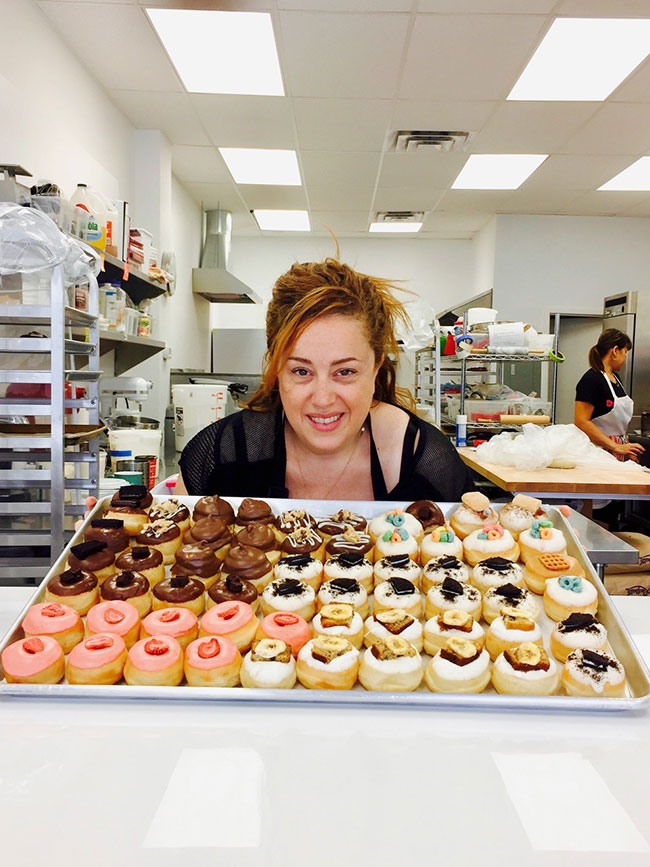 At first glance, the connection between baked goods and criminology seems to be limited to those old tales of cakes with lock-picking files being smuggled into prison. Then came along Nathalie Kaspy-Shtern – a criminologist turned chef turned baker turned successful entrepreneur – this Montreal-based business-owner personifies today’s culinary innovator.

Kaspy-Shtern is the creator and owner of DoughNats, a retail bakery in Montreal that markets and sells miniature, artisan doughnuts. These small indulgences carry a big wallop of personality not only in taste, but in the way they’re marketed. The doughnuts have names like “Tru-Doh” – a choc-olate glazed doughnut topped with homemade brownies, or, Berry Beyonce  (made with Lemonade glaze) and Espress-o-self.  Though her shop has only been open nine months as of this writing; business is growing briskly and the vibe in the store is welcoming and warm. Kaspy-Shtern’s career path has been eclectic to say the least, but she has one quality in spades that is the hallmark of every great entrepreneur – the ability to trust her instincts.

Kaspy-Shtern holds three degrees in criminology including her doctorate. She’s also the mother of five children ranging in age from eight to 21. Suffice it to say, she wasn’t sitting around looking for something extra to do to fill her time. A desire to focus on her family led her to leave her career in criminology and work within the home. When her last child entered school, she decided to pursue an interest of her own and felt drawn to cooking. Wanting to be trained properly, Kaspy-Shtern entered culinary school. Anyone who understands the restaurant business knows that it’s hard on family life, but Kaspy-Shtern had stellar support from her husband and felt deep in her gut that this was her path.

“Becoming a chef meant huge sacrifices for the family while I went to school,” she points out.  “I was in class from 7:00 am to 4:00 pm each day…but I LOVED it.”

One day the class had a test on sauces and she had finished hers early so the instructor said ‘Go make whatever you want.’

“So, I just made a mini doughnut…and it was the best doughnut I’d ever had in my life.  I took the rest of the batch home and when my husband tried it he said ‘That’s not a doughnut, that’s a DoughNAT.’ And so the product and the practice of wordplay with the branding were born. After posting pictures of the DoughNats to Instagram, Kaspy-Shtern noticed that the product lent itself to beautiful visuals which are so important in today’s digital world. The path for her next career step seemed to light up beneath her feet.

“I always say that I didn’t pick doughnuts as my business focus…the doughnuts picked me,” she says with a laugh.

Richard Branson, founder of the Virgin Group which controls more than 400 companies, noted that “Entrepreneurial business favours the open mind. It favours people whose optimism drives them to prepare for many possible futures, pretty much purely for the joy of doing so.”

Kaspy-Shtern’s ability to follow her heart and instincts are the hallmark of most successful entrepreneurs.  Though, she didn’t always see it in herself.

“My husband commented one day that I was a true entrepreneurial personality and I said to him, ‘No I’m not!’

As the business idea grew, she decided to make her doughnuts very premium, using only the best ingredients and to make them tiny to tap into the small indulgence trend.

“They’re small enough to have three or four and try different flavours and they lend themselves beautifully to parties.”

While the catering and corporate side of the business grew, Kaspy-Shtern recognized that consumers were wanting to buy the doughnuts for personal consumption, so a retail location was the logical next step. Her shop opened in September 2016.

The mini doughnuts’ irreverent names are Kaspy-Shtern’s own creations as well.

“As a mother of five children age eight to twenty-one, I listen to their acronyms and word play for my product name ideas.  The “Very Berry Beyonce” doughnut has lemon and strawberry in a nod to her Lemonade album.”

The meaning isn’t always obvious but still works on two levels of comprehension.  DoughNats plays in the specialty space as well with a doughnut called the “Triple Threat” which is baked, vegan and gluten-free. Sometimes a popular doughnut inspires a line extension.

“We have one doughnut called a Dough-Re-Mi which has a chocolate glaze, vanilla drizzle and eggless raw cookie dough on top. Since we’re making the mini cookie anyway to top the doughnut, we’ll likely add mini cookies to the line-up at some point. They are easier to ship than the doughnuts which must be consumed within 10 hours to maintain freshness so we may explore delivery farther afield at that point.  We only deliver within a few kilometres of our shop right now,” she says.

Kaspy-Shtern is most passionate about the retail experience she’s facilitating in store for both customers and her team of employees.

“It’s staff first before everything.” She says.  We’re like a family here.  I try to make sure they feel appreciated. I often make lunch for everybody, we respect each other.”  This is another trait she shares with Richard Branson who famously commented that he puts “his staff first, the customer second and shareholders third”.

As Kaspy-Shtern reflects on the ingredients of her success she sums it up as follows: “We have the nicest customers and we believe we’re giving them something joyful. Doughnuts are really ‘little pillows’ of love.”

Michelle Brisebois is a marketing consultant specializing in digital content strategy and retail/ in-store activation.  Michelle has worked in the food, pharmaceutical, financial services and wine industries.  She can be reached at briseboismichelle@sympatico.ca.