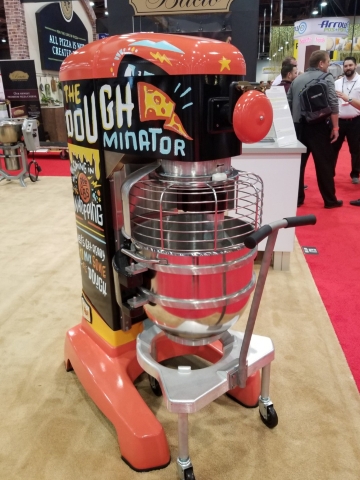 Hobart, the premium commercial food equipment manufacturer known for designing and building industrial bakery mixers, is pleased to announce the winner of the 12th custom-designed mixer giveaway at the 2019 International Pizza Expo in Las Vegas.

Chris Koutsantonis of Olympia Greek Taverna in Kelowna, British Columbia, Canada, was the lucky winner of “The Doughminator” — a Hobart® Legacy® HL662 pizza mixer valued at $20,000.

Olympia Greek Taverna is a family-owned restaurant offering pizza and pasta options, as well as Greek cuisine since 1968.

The mixer is known in the industry for its ability to deliver consistent performance and quality.

Hobart would like to congratulate Koutsantonis and the staff at Olympia Greek Taverna for being proud new owners of “The Doughminator.”